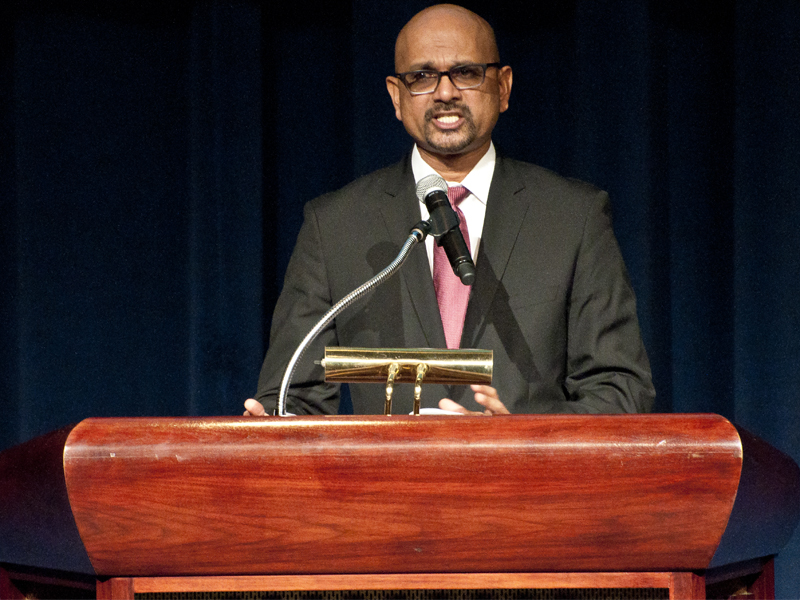 Maharaj talked about how journalism is shifting with the high speed technology of today. He described the Internet as the new frontier. “Digital journalism allows us [journalists] to reach more people than ever before, and to package our content in ways that were not too long ago thought impossible.” He also emphasized the necessity for accessibility and speed regarding news. According to Maharaj, the adage “The news never sleeps” has never been as relevant as it is today. No longer are newspapers the only way to get current information. In a connected, globalized society, journalists must always be ready to accurately and swiftly disclose the news in a fashion much quicker than the printing presses.

Maharaj also addressed the universality of the news. Although physical boundaries remain, technology has helped bridge the world together through increased communication and reporting. “The foreign is local,” said Maharaj, in the sense that an event in Los Angeles can inspire changes in other cities, states and even countries around the world. The ubiquity of information makes every place in the world relevant to local news. The emerging face of news is not located on a paper outside one’s door, but instead on television and computer screens. The face of the newspaper is not disappearing but changing, said Maharaj, and “We need to keep developing our presence online.”

The expansion of the news into new streams of media also demands new applications to maintain the principles of journalism. Maharaj addressed the need to maintain accuracy and integrity while still being efficient. “While the principles of our profession remain unchanged, we need to explore new methods of telling and delivering our stories,” Maharaj said.

“Today, there are any number of front pages… readers get their news where they want and can decide for themselves what is the main story. This basically means we’ve gone from publishing one product a day to publishing many, and doing it in real time while keeping our standards high.”

Though the methods of journalism are changing, the quality and verifiability of the information must not, Maharaj explained. He described his view on how to move the LA Times forward to further support Southern California. His plan continues the “watchdog mission with investigative reporting” that has sustained and informed the public of Southern California, as well as continue “the great narrative mission with superlative storytelling.”

Maharaj expressed his belief that newspapers like the LA Times have to make tough decisions when fulfilling their social responsibility to inform readers. He told a story of how the LA Times recently published photos of American soldiers degrading Afghani corpses. Although strongly warned not to, the newspaper published them anyway. In this case, the power of journalists to reveal real events is political and brave, albeit dangerous. Maharaj explained, “At the end of the day, our job is to publish information that our readers need to know.”

Day two of writer’s week kicked off without a hitch. The reading started with Jacqueline Berger, a poet from San Francisco, who was followed by Sheila Sanderson who hails from Kentucky. UCR Professor Emeritus Christopher Buckley then presented before the night departed from poetry, and Patricia Hampl closed the evening.

Berger read from her latest book, “The Gift That Arrives Broken,” which won the 2010 Autumn House Poetry Prize. The passages were filled with provocative, close-up, concrete details and images that smack you in the face with their directness. The poems from these books focus on family—she wrote the book after her parents became sick.

Sanderson read with a Kentucky twang and sipped from her mason jar of iced tea in between poems. The first poems she read are from her book, “Keeping Even” and were inspired by her homeland. They took the audience and placed them in a Kentucky bar or grassy plain. The audience got to really know small town Kentucky life; how they talked, what they felt and how they even breathed with her keen attention to detail. The audience was then transported to Arizona where she captured the desert mountains of northern Arizona where she now resides. Her mastery of landscape kept the audience riveted.

With an introduction by Juan Felipe Herrera, Christopher Buckley was up next. Buckley read from his most recent book, “Varieties of Religious Experience,” which blends metaphysics, cosmology, religion and pop-culture. While his poems take on a desperate and longing voice the mood stayed light as he easily joked with the crowd in between poems which the other poets failed to do. It felt like we were sitting at his kitchen table as he recited.

Hampl finished the night and read excerpts from her current novel in progress. She said that this new novel focuses on qualities of leisure and daydreaming. “We daydream our way into writing,” stated Hampl. During her reading of the excerpts, daydreaming is exactly what happened. The whole audience became lost in the world of St. Paul, Minnesota that she created. There was a delicate and precise touch to her descriptions that enwrapped all five senses and provided tenderness to the characters that kept the audience wondering what next. It was a great ending to a beautiful day filled with masterful poetry and prose.

12:00 p.m. Nalo Hopkinson
Those who came to Professor Nalo Hopkinson’s reading were in for treat of science fiction and fantasy. Born in Jamaica and recipient of the Warner Aspect First Novel Award, Hopkinson engages in complex genre crossing with urban realism, fantasy, folklore and near future speculation. She shared a story from chapbook “Report From Planet Midnight” and a passage from her upcoming novel “Sister Mine.” The first, entitled “Shift,” was a second-person narrative of a young African American man and a “golden girl” whose relationship is interrupted by his goddess mother and mischievous sister. Themes of identity and gender peeked in this story as Hopkinson energetically read section in Jamaican dialect. These ideas were revisited in the second reading with celestial beings and family tensions. In the Q&A that followed, Hopkinson said, “I’m a fairly organic writer.” She writes, workshops and then sees how that sparks new ideas.

3:00 p.m. David Shields
The room was popping with quiet laughter when David Shields shared an excerpt from his new book, “How Literature Saved My Life.” With essays and stories in New York Times Magazine as well as the author of 14 books, Shields explained that this book is a “practicum” and “reconstitution” to “Reality Hunger,” his last book that “in some ways burned literature down.” The excerpts were jovial and essayistic in Shield’s first-person narration. He made a hilarious comparison to the qualities of George W. Bush that he also “despised in [his self].” In another chapter, “Love is a Long Close Scrutiny,” his character secretly reads his girlfriend’s journal. It was entertaining to say the least. In the Q&A, Shields said of his non-fiction, “Memory is pure fiction in many ways… I’m interested in human consciousness, and that’s what the essay foregrounds.”

Day four of Writer’s Week kicked off with Tom Lutz introducing UCR alum and former student of his own, Rebecca O’Connor. O’Connor started off with her short story, “Birdsong and Gunshot,” which can be found in “Get Out of My Crotch,” a collection of nonfiction dealing with women’s health and rights. The piece dealt with accounts of abuse suffered by herself and the female members of her family, the personal intensity of them all juxtaposed with the legal classifications of each act. After such a heavy story, O’Connor discussed her passion for bird-training, and its influence on her latest novel, “Flight,” which she then read a short excerpt from before departing.

Next up was Aimee Phan, novelist and current professor at the California College of the Arts. She read from her most recent novel, “The Re-Education of Cherry Truong.” The story revolves around a young Vietnamese woman going back to Vietnam to discover more about her family’s history, but also switches perspectives between her, her grandmother, her father and some of her cousins. Phan talked about her fascination with multiple perspectives in narrative and how it gives one the opportunity to present an event in many different ways. In the brief Q&A afterwards, Phan discussed how she used historical and family pain to craft her fiction.

Susan Straight then introduced her friend and colleague, Ruben Martinez. He started by introducing his nonfiction book “Desert America: Boom and Bust in the New Old West.” The excerpt he read dealt primarily with the inhospitable situation of the Mexican-American border, specifically with Redford, Texas, a town declared the drug capital of the southern U.S., where 75 percent of the population is apparently involved in drug trafficking—even though said population is only a little over one hundred. Both his story and Q&A focused on the need for hospitality and openness that is sorely needed on the border. “If we don’t open the door,” Martinez said, “then I think something inside us dies.”

Finally, the night came to a close with renowned novelist Jamaica Kincaid. Kincaid was sweetly soft-spoken, but the poetic and often long-winded prose of her reading from “See Now Then,” her latest novel, packed a literary punch. Afterwards, she held a more lengthy Q&A, in which she addressed many questions from a room packed with admiring fans.

She admitted that growing up only having access to a bible, a dictionary and Milton’s “Paradise Lost,” she almost can’t help writing sentences that can span entire pages. She also discussed the American concept of happiness, namely that “we speak of happiness as something we step into,” when really it is just a part of life. When asked why she started writing, she answered that it was because she couldn’t do anything else. One of her last questions was on the subject of inspiration, to which she told all aspiring writers in the room, “Inspiration is not magical, it’s something in you. You can find it in yourself.”

Day five of Writers Week was characterized by immersive fiction, intense poetry and a slideshow of eclectic photography. Novelist and recent UCR MFA graduate Mariah Young began the day by reading the title story from “Masha’allah,” her new collection of short stories. A native of San Leandro, Young characterized Oakland, California as she presented her piece about a cab driver tasked with speeding a pregnant woman to the hospital.

Marisela Norte, a Los Angeles-based poet and fiction writer, followed Young with an entertaining and personal discussion of the merits of “observing the little things.” She read a poem she wrote en route to Riverside and shared a series of sometimes ridiculous, sometimes surprising and consistently beautiful photographs she snapped around Los Angeles, from which she draws her inspiration. “I couldn’t make this up,” she said as she looked at a photo of a lone unicorn figurine abandoned at a bus stop.

The evening ended at the Culver Center, where award-winning novelist Jayne Anne Phillips presented the Stephen Minot memoriam reading for 2013 as the conclusion to UCR’s 36th annual Writers Week.