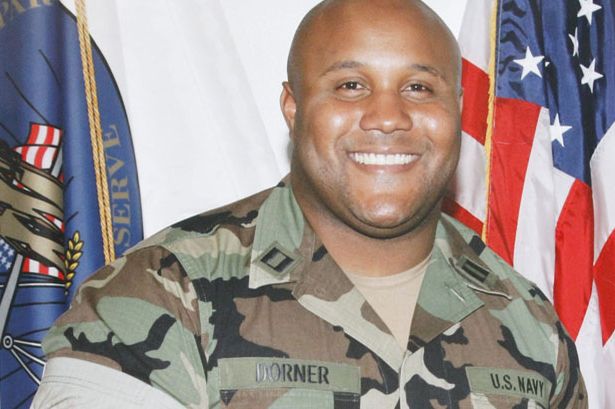 Update: Authorities have a “reasonable belief” that  Dorner died in a cabin fire after a police standoff in the San Bernardino Mountains.

In an 18-page manifesto released by Dorner on Feb. 3, he declared revenge on the Los Angeles Police Department for alleged corruption and warned of more killings.

Dorner managed to elude capture and a statewide manhunt for the suspect is currently underway. Officials last tracked Dorner to the San Bernardino mountains, where he is believed to be located and heavily armed with as many as 30 weapons.

The series of events dates back to August 2007 when Dorner worked for the LAPD and reported the use of excessive force by a fellow police officer. In 2008 he was relieved of his duties by the LAPD following the report. The LAPD charged him for making false statements which Dorner claimed was an attempt to cover up the supposed corruption within the police department.

Dorner appealed to keep his job, but was denied by the LAPD Board of Rights. Former LAPD Captain Randy Quan represented Dorner during the tribunal, but Dorner accused him of being incompetent and responsible for the outcome of the ruling.

Dorner reportedly held a grudge against Quan following the decision. In the online manifesto that he released online last week, Dorner mentioned Quan and accused him of wrongdoing.

“Your lack of ethics and conspiring to wrong a just individual are over,” the manifesto read.

The first of the series of shootings occurred on Sunday, Feb. 3, 2013 when the bodies of Keith Lawrence, 27, and Monica Quan, 28, were found shot to death in Irvine, Calif. Quan was an assistant basketball coach at CSU Fullerton and the daughter of Randy Quan, the LAPD officer who represented Dorner when he was tried by the Board of Rights in 2008.

The couple was sitting inside a car in a parking lot structure. Authorities indicated that the shots came from outside of the vehicle and were baffled for days with no clues as to who the shooter was.

On Wednesday, Feb. 6, three days after the shooting, Dorner was named a suspect in the murder of Lawrence and Quan. Dorner posted the online manifesto that day, implicating himself as responsible for the murders.

“I know most of you who personally know me are in disbelief to hear from media reports that I am suspected of committing such horrendous murders and have taken drastic and shocking actions in the last couple of days,” he said. “Unfortunately, this is a necessary evil that I do not enjoy but must partake and complete for substantial change to occur within the LAPD and reclaim my name.”

He also made violent threats to multiple police officers. Authorities were assigned to protect the people mentioned in his manifesto.

Authorities believe that Dorner attempted to steal a boat in San Diego, Calif. at the Southwestern Yacht Club.

On the night of Wednesday, Feb. 6, the 81-year-old owner of the boat was on his sundeck cruiser when a man that matched Dorner’s description approached him with a gun and tied him up. According to the owner, the suspect wanted to steal the boat in an attempt to flee to Mexico. The engine of the boat would not start due to a failed propeller, so the suspect fled the scene of the crime.

Dorner was spotted near a Corona Arco gas station off Weirick Road in the early morning of Feb. 7. A local man spotted Dorner’s Nissan Titan pickup truck and called the police, informing them of Dorner’s whereabouts.

Two LAPD officers who were guarding one of the targeted individuals named in the manifesto, raced to the scene. Officials followed Dorner onto the 15 freeway, where he stopped near the exit ramp of Magnolia Avenue. Dorner pulled out a weapon and opened fire on the officers, grazing one by the head. Dorner managed to escape.

“Due to damage to the police vehicle because of his gunshots, the officers were unable to pursue him,” LAPD Chief Charlie Beck explained in a press release.

Just minutes after the Corona shootings, Dorner drove to Riverside and allegedly ambushed a couple of officers in the corner of Magnolia and Arlington. The two Riverside police officers were fired at by Dorner. Michael Crain, 34, was killed at the scene of the crime. His partner was seriously wounded and has yet to be identified  The second officer underwent surgery the morning of Feb. 7 and is in stable condition.

A worker at the 7-Eleven convenience store near the scene of the crime spoke with the Highlander and detailed the events that transpired. “[Dorner] pulled out from behind them and started shooting at them,” he said. “One of [the officers] died and the other called [for backup] on the radio. So they came right away and blocked the area.”

Following the shooting, officials barricaded the streets between Magnolia and Brockton with orange cones and yellow tape within a one-mile radius. Local businesses were forced to close down shop for 15 hours in the aftermath of the crime.

That day, UCPD released an email to the students of UC Riverside, detailing the shootings that took place earlier that morning, asking students to remain vigilant.

“There are no immediate threats to the UCR community,” said UCPD Chief of Police Mike Lane in an phone interview with the Highlander. “The issue with this suspect is that he is actually targeting law enforcement officers on and off duty.”

Just hours after the Riverside shooting, seven LAPD officers in Torrance, Calif. came across a truck that was similar to the description of Dorner’s car and fired at the two individuals inside the vehicle. Neither of the two individuals were Dorner.

“Tragically, we believe this was a case of mistaken identity by the officers,” LAPD Chief Charlie Beck said during a press conference.

They were taken to the hospital and treated for gunshot wounds. Carranza received minor injuries to the hand from shattered glass. Her mother was shot in the back and placed in the ICU at Harbor-UCLA Medical Center, where she is in good condition.

Police also shot another pickup truck in Torrance resembling Dorner’s vehicle later that day. No one was injured in that incident.

The officers involved in the shooting were placed on paid administrative leave. The Highlander contacted the Torrance Police Department for further explanation, but no details were released.

A vigil was held by Mayor Rusty Bailey outside Riverside City Hall on the night of the shooting in honor of the fallen officer. Riverside residents and family members of the officers were in attendance, holding candles and praying for the slain policeman. The flags outside City Hall flew at half staff during the night.

“This is my 11th line of duty death that I’ve been involved with,” said Steve Ballinger, a Riverside PD chaplain who held close ties to the slain officer. “You would think it would get easier. It doesn’t get easier.”

A devastated Ballinger continued to voice his initial reaction upon learning of the shooting. “It kind of sucks the breath out of you. My first thought was, ‘not again.’ This world is just getting more evil than ever before.”

A Nissan Titan was found on fire in a wooded area near Big Bear Lake on the afternoon of Feb. 7. Officials checked the vehicle identification number and confirmed that the burnt truck belonged to Dorner. The Big Bear Lake Fire Department stated that the set of footprints discovered near the truck was believed to be Dorner’s, but officials were unable to locate the suspect.

The charred remains of guns were found inside the burnt truck, but officials believe Dorner could still be heavily armed.

Police searched hundreds of homes in the San Bernardino mountains on Thursday and Friday but were forced to temporarily suspend the search due to snowfall. Search crews strongly believe that the suspect is hiding somewhere in the mountains. With law enforcement officials carrying tactical gear and automatic weapons, the search resulted in the closing of many Big Bear ski resorts. The Bear Mountain and Snow Summit reported that the snow-lift count was down by 15 percent last Friday

“The possibility exists that he is here, somewhere in the forest, so we’re going to keep looking, until we determine that he’s not here,” said spokeswoman Cindy Bachman of the San Bernardino County Sheriff’s Department.

Six police cars were assigned to protect Los Angeles Police Captain Phil Tingirides, who is chair of the disciplinary committee that stripped Dorner of his badge in 2008.

The city of Los Angeles is offering a $1 million reward for information leading to the capture of Dorner. The amount is “the largest local reward ever offered to our knowledge,” according to Police Chief Charlie Beck.

On Feb. 10, Beck announced that the LAPD is reopening the 2008 case in which Dorner was dismissed from duty by the Board of Rights. Beck assured the public that the case is being revived to address Dorner’s termination. It is not intended to resurrect his allegations of the use of excessive force by the LAPD.

With possible sightings of Dorner, authorities believe that he may have wounded two sheriff’s deputies during a confrontational shootout. They responded to calls of a car jacking and home invasion. Dorner is suspected of tying up a couple in their Big Bear cabin, located in the community of Angelus Oaks, where he temporarily barricaded himself. He stole their White Dodge pickup truck, fled the scene of the crime and is considered to be heavily armed.

The injured police officers used smoke bombs to alert passing helicopters about Dorner’s whereabouts. Officials set up a road block to deter traffic flowing through the city of San Bernardino to Big Bear.

Hundreds of rounds of gunfire were exchanged between Dorner and law enforcement in the Big Bear ski area near Los Angeles.

Dorner fled to a nearby cabin and got into another shootout with authorities, leaving one officer injured and another dead.

Police tossed smoke devices into the cabin which caught on fire and burned down the building along with a body inside.

Multiple sources confirmed that the accused murderer was found inside the burning cabin in the San Bernardino Mountains. The LAPD later held a conference refuting those reports, saying that investigators have yet to enter the cabin and identify a body.

Los Angeles Mayor Antonio Villaraigosa said Wednesday that authorities have reason to believe that the charred body belongs to Dorner. Investigators have been searching the burnt cabin for clues. Authorities also stated that it could be days before they can confirm if the remains do belong to Dorner.