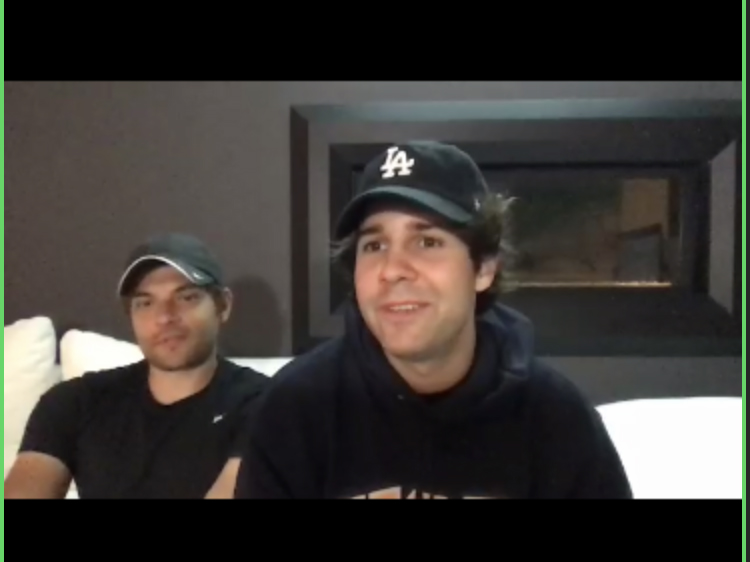 Summer of 2018 is when I first discovered David Dobrik. I would watch his vlogs for hours on end, marveling at the crazy bits that would happen. I distinctly remember thinking, “He seems like he would be a good friend,” and that was confirmed on Friday, May 29 when the YouTube personality gave an online Zoom lecture as part of ASPB’s Get To Know series.

The lecture began at 7:30 p.m. and almost instantly, the comments section was completely flooded by eager and excited viewers. However, before introducing Dobrik, ASPB panelists asked all participants to take a moment of silence for George Floyd, a man who was murdered by three police officers. This was a very powerful moment because the comments section had gone silent for those few seconds. Many commenters thanked ASPB for having acknowledged the many struggles happening within the black community.

Once the moment of silence was over, David Dobrik popped up on the screen sporting a UCR hoodie which many viewers commented on. It was a lively event with Dobrik reading comments and answering questions from ASPB’s Instagram page.

ASPB took questions from student submissions on Instagram and a Q&A feature on Zoom. ASPB chose a handful of lucky students to show their screen and ask Dobrik a question. “If you were stranded on a deserted island and could take anyone with you, who would it be?” read one question. Dobrik himself answered that he would choose Ilya Federovich, his childhood friend. Many people in the comments mentioned Natalie Mariduena, Dobriks assistant and asked why he would not choose her. “She’s like a sister,” stated Dobrik and clarified that he would not date her.

The evening was full of people laughing and interacting with Dobrik. My favorite parts of the Zoom lecture were the moments where participants could have a chance to ask Dobrik questions live. Out of the many people who participated, the most lively portion occurred when a student named Suyeon Han was presented the opportunity to speak with Dobrik. She kept mentioning she was Dobriks’ number one fan and showed him that she has been sending him direct messages on Instagram for months. Han asked Dobrik to hit her with her paintball gun but Dobrik pulled out a flamethrower during the Zoom lecture instead, the same flamethrower that appears in many of Dobrik’s vlogs.

The last people who had the chance to meet Dobrik and pose a question were a group of three girls who gave Dobrik the opportunity to name their kitten. The kitten is now named Iron Man, or Iron for short. It was a wholesome moment with viewers, such as myself, laughing and admiring the kitten.

Overall, that night was the highlight of my week due to Dobrik’s high energy and all around good vibes. Due to the intimate nature of it being hosted via Zoom, it felt private, as if Dobrik was talking directly to you. ASPB’S attempt at a Zoom lecture was definitely a first, but it was a great experience.