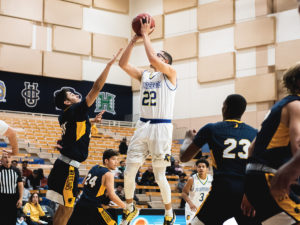 The Big West Conference has recently released the men and women’s basketball schedules for the upcoming 2020-21 season. The organization is taking all necessary steps in order to ensure the safety of all students, coaches and staff involved. Big West has proposed an altered form of scheduling in order to minimize the risk for all those involved. Over the course of 11 weeks, with one bye week included, teams will play against each other on consecutive days at the same location. The men and women’s teams will play the same teams at opposite venues. Most of the games have been scheduled to take place on a Friday or Saturday. As expected, no spectators will be allowed until further notice.

Big West is wise in taking the first steps in resuming sports. With pretty much all professional sports back in effect, Big West, along with other collegiate sports organizations, should feel safe enough to resume game-play. The precautions that they have taken demonstrates the importance they have placed in ensuring the safety and health of everyone, especially since they have stated that they considered all factors in resuming competition play.

The decision from the Big West Conference could not have come at a better time for UCR Athletics. With the potential elimination of UCR Athletics from the UCR budget, the return of sports could change the mind of the Budget Advisory Committee. UCR Athletics has been in a state of constant improvement all across the board. With each team getting stronger and more efficient each year, every team will be able to make a statement on the court and show the school that they are here to stay. This is especially crucial for UCR as they continue to climb the ranks as a university nationally.

Despite the changes, the goal still remains the same: for our fellow student-athletes to win big on the court. Sports are very important, not only for the coaches and athletes, but for the many fans who enjoy the thrill of the game and seeing their school represented. Attending collegiate sporting events adds to the value of a student’s college experience and resuming gameplay, albeit in a way that is safe for both players and fans, is the best decision that Big West can make. This announcement has given new hopes and a light at the end of the tunnel to many.