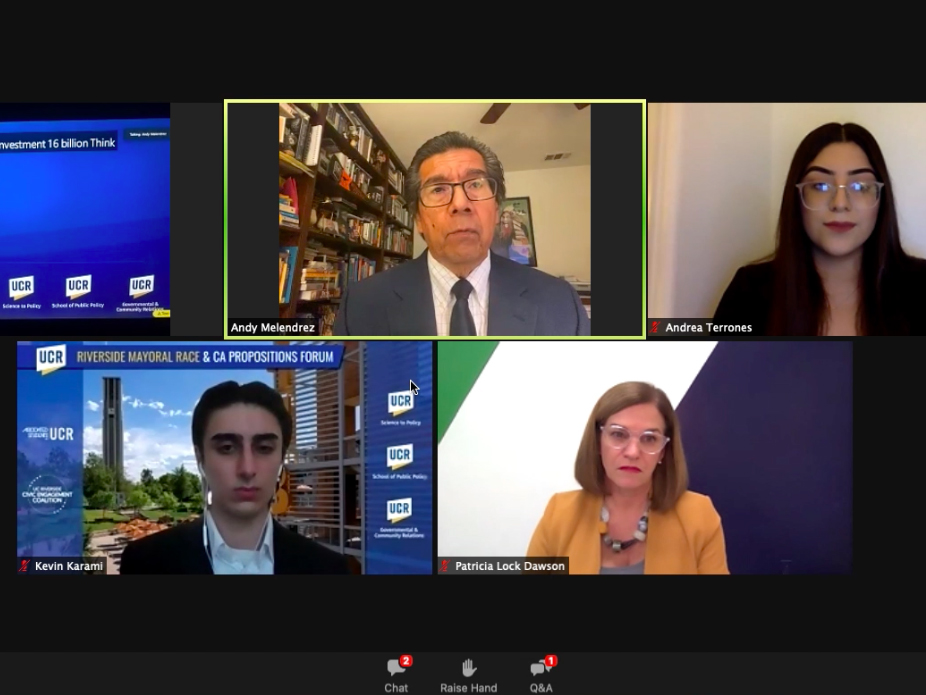 On Wednesday, Oct. 21 the UCR School of Public Policy hosted a town hall between Riverside mayoral candidates Patricia Lock Dawson and Andy Melendrez. The event was hosted in collaboration with ASUCR, the UCR Science to Policy program, the Civic Engagement Coalition and the UCR Office of Government and Community Relations.

The event began with a one-hour debate and discussion forum over Propositions 15, 16 and 21 on the California ballot. Representatives from both sides of the propositions were allowed four minutes to give their initial statements regarding their stance on the proposition. The speakers’ orders were chosen by random draw.

Proposition 16 was discussed first, which would allow for the reinstatement of affirmative action programs in California.

The speaker who presented the opposing side of Proposition 16 stated that the measure was rushed to be put on the ballot during a global pandemic. He stated that Proposition 16 will remove a clause from the California constitution that states, “the state will not discriminate against, or grant preferential treatment to, any individual or group on the basis of race, sex, color, ethnicity or national origin.” According to the opponent, “Prop. 16 will stoke racism and tension between racial minorities because it only offers a coverup … to our systemic problems in our K-12 education.” He stated that since Proposition 209 was passed in 1996, minority admissions to universities have increased.

The speaker in support of Proposition 16 stated that voting YES on Proposition 16 would allow for lawmakers to reinstate affirmative action policies. It would support members of disadvantaged and underrepresented groups that have previously suffered discrimination in areas such as education, employment and housing. The supporter added that the systemic barriers set forth by Proposition 209 affect women of color and single mothers like herself from reaching their true potential. “In California, small businesses are the backbone of our economy, and nearly all government contracts are awarded to large companies which are run by older, caucasian men,” she stated in support. According to the speaker, passing Proposition 16 would close the wage gap, ensure that government contracts are equitably distributed and ensure access to a quality education for all.

Proposition 15 was discussed next which entails raising the property tax of businesses with over $3 million in California property.

The spokesperson for the opposing side of Proposition 15 gave some background to the ballot measure. He stated that Proposition 13, which was passed in 1978, capped the taxes placed on California property and for 42  years, has provided certainty and stability for property owners. “Prop. 15, unless defeated, is the largest property tax increase in California history, coming in at …  $11 billion per year,” they stated. The opponent stated that approving Proposition 15 would devastate small businesses, highlighting that most small businesses lease the properties that they are working out of which would most likely cause them to pay the property tax increase of their spaces. For example, if a business owner rents a space within a shopping mall and the shopping malls property taxes increase, the landlord would increase the rent of all the small business owners leasing their property. Finally, they added that Proposition 15 would increase the prices of consumer goods as well. They also added that education is funded last under Proposition 15, and there is no oversight or transparency on how that money is being spent.

The spokesperson in support of Proposition 15 outlined how the measure would support local schools and local communities across the state. They stated that this proposition ensures a “split-roll tax” that would ensure that large corporations pay their fair share of property taxes, which would in turn provide $6.5 billion to $11.5 billion in new funding to local governments and schools. They stated that Proposition 15 is critical in restoring and enhancing local schools, local governments and housing.

Proposition 21 concluded the debate and discussion forum over California ballot measures. Proposition 21 would implement city based rent control policies, not including family homes or homes that are less than 15 years old.

The spokesperson in support of Proposition 21 stated that it seeks to address the housing crisis in California. They acknowledged the cost of housing is too high and that rent has increased in the state while wages have remained the same. They stated that this has contributed to the worsening homelessness crisis happening in California; in 2019, homelesseness in California grew by 16%.

The spokesperson for the NO on Proposition 21 campaign began by stating individuals who oppose it, including California Governor Gavin Newsom, claim that it may make California’s housing crisis worse. They agreed that housing in California is too expensive and that something must be done but classified Proposition 21 as a “bandaid fix.” They argued that there are already laws and rules in place to ban evictions and protect rent controls.

The second half of the event consisted of a town hall between Riverside Mayoral Candidates Patricia Lock Dawson and Andy Melendrez. The candidates discussed issues facing Riverside including the COVID-19 pandemic, climate change and protecting people of color communities.

Melendrez spoke first, giving some insight into his long standing history with the city of Riverside. His family is local to Riverside, and Melendrez went through all levels of the public school system from K-12. He started his early education at Casa Blanca Elementary School, Lincoln Middle School and Poly High School. His higher education began at Riverside City College before transferring to UCR for one quarter. His time at UCR was cut short after having to leave for work, but he obtained his bachelor’s and master’s degrees at California State University, San Bernardino. Melendrez was elected as a city council member in 2006 and added that he has witnessed many ups and downs in the city of Riverside, such as the 2008 recession. Under his term, he helped to create the Riverside Renaissance initiative, a $1.6 billion investment to improve roads, sewers, parks and libraries with over 400 projects.

Lock Dawson is also a Riverside native whose family has lived in Riverside for 70 years. She is a UCR alumni and stated that the importance of college was ingrained in her at a young age because her parents understood college to be their children’s way out of poverty. After college, she studied wildlife and forestry at the University of Washington before returning to Riverside to pursue her goals to work toward a community where their young people would feel that they have opportunities. Lock Dawson is a business owner, has worked for the California State Legislature and currently serves as a trustee on the Riverside Unified School District (RUSD) Board of Education, having first been elected in 2011.

The candidates answered questions that were previously submitted by the community. The candidates were asked to distinguish the differences between both of their platforms, considering that they both have progressive endorsements.

Lock Dawson stated that her platform is quite different because she is endorsed by both Republicans and Democrats, as well as businesses and employee unions. “Councilmember Melendrez is running on his experience, but his experience is very limited,” stated Lock Dawson. She added that she has vast experience in different aspects of government and volunteer experience in Riverside as well.

Melendrez expressed his distaste over Lock Dawson’s claim that he is limited in experience, stating that he has worked in a variety of levels of legislature and has worked with federal offices in the past. Melendrez added that he has operated a big business and has worked under various state laws supporting workers rights, which he believes puts him above his opponent in terms of understanding how it works to operate one successfully.

Next, the candidates discussed what Riverside should be doing to prevent the spread of COVID-19, especially after Riverside was recently placed back into Tier 1 of California’s coronavirus reopening scale.

Melendrez stated that the testing rate in Riverside is working successfully and says they can do a better job at encouraging people to get tested in order to be able to open up the city more. He also mentioned that he is currently working with the Small Business Association (SBA) to aid small businesses during the pandemic.

Lock Dawson stated that under her guidance, the city of Riverside would follow in the footsteps of the RUSD to ensure that they are open and safe. Opening up safely is also one of her priorities for Riverside.

The candidates also discussed how they would support people of color within the Riverside community. Lock Dawson acknowledged that the city’s priorities have changed, and for good reason. Last year, she says, Riverside’s most pressing issues were job, economy and homelessnes but that has now changed to fighting for police reform, racial justice and civil unrest. She stated that she would implement an equity taskforce, like she did at the RUSD, and individuals to oversee a program of diversity and inclusion.

Melendrez stated that the city of Riverside has implemented anti-racist training within public health and recently passed an anti-racism resoultion that will be incorporated into the city council’s strategic plan. Melendrez stated that one area where Riverside can improve is in their hiring processes and as mayor, he would constantly monitor these figures and ensure that hiring practices are conducted at an equitable rate.

Finally, the candidates addressed the issue of climate change pertaining to Riverside. As an environmental scientist, Lock Dawson stated that this is a subject she is very familiar with. She stated that there is no question that climate change is real and important steps need to be taken to keep Riverside cool. She acknowledged that in order for this to happen, the city needs to increase green spaces in the community, work to get cars off the road and increase public transportation and bring down emissions.

Melendrez responded stating that the city council is working on their strategic plan for 2025 to lower greenhouse gases in the city. He added that they are making steps to increase the use of solar and green energy. Melendrez recently received a $31.2 million grant from the Strategic Growth Council aimed to lower the carbon footprint for low income communities in Riverside. The grant will be used to create safe and walkable trails on the east side and create an environment that would decrease the use of vehicles in that area. “I think this [grant] will be the seed that the city of Riverside needs to have it grow,” stated Melendrez.

Both candidates are on the Riverside general election ballot to be voted on Nov. 3.