Highlander
Home Radar Blackalicious Gets Boisterous at the Barn 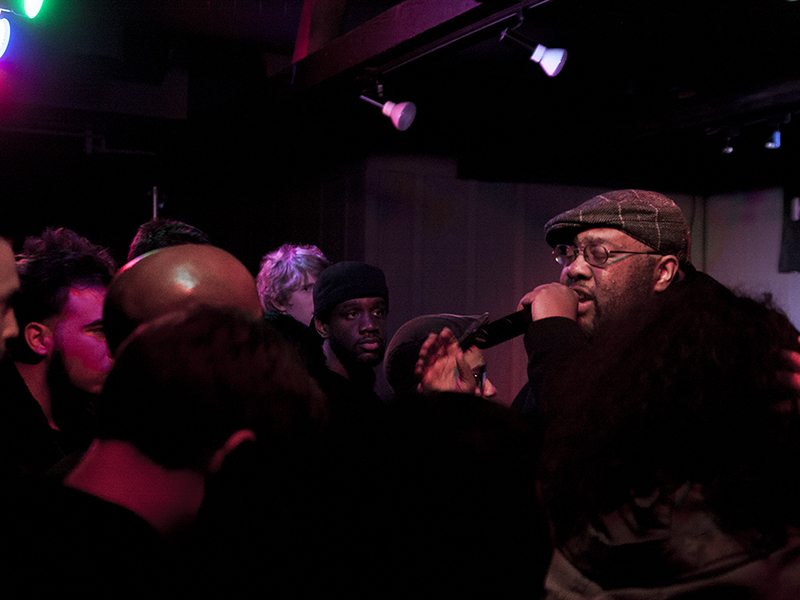 Northern California-based hip-hop duo Blackalicious and L.A.-based Rebels to the Grain filled the barn with dope beats and intricate lyricism last Wednesday, Feb. 13. Although Rebels to the Grain did a great job opening, they put the crowd into a bit of a lull. But Blackalicious soon came on and pumped life into the crowd with every turn of the record and quick, multisyllabic rhymes. Blackalicious frontman Gift of Gab had me asking, how the hell can someone speak so fast?

Rebels to the Grain (consisting of vocalists MP and Cheddy) opened with their unreleased single, “Fine Wine,” just in time for Valentine’s Day. It’s a good song to play with your boo next to the fire, but it was too slow to open a show with, and didn’t get the crowd very interested. They quickly redeemed themselves as they got into the swing of the music, especially with their song “Whatever You Do,” a heavy rhythm with a fast, bluesy guitar background accompanied by Cheddy’s smooth flow. He sang, “It’s time to roll the windows down / roll it up and take a pound / rock the show we in and out / at the crib Guiness’d out / everybody getting down.”

All the work Rebels put into getting the crowd bumping was lost when they invited Riverside-based group Herbalistics onstage for a song. The MC’s heavy monotone voice sucked the life out of the crowd. After Herbalistics, Rebels had their work cut out for them, but they won the crowd back with “False Power” and “Harvest Season.” Cheddy bounced across the stage, while MP kept a smooth rhythm in his rhymes, along with a positive message: “This a gathering of unity for the black and the brown / white, red, yellow; making green, holding it down.” Their non-judgemental, unifying lyrics attracted the crowd, but sadly Herbalistics kept Rebel’s set from reaching its full potential.

But that isn’t the summation of the whole night. Things quickly turned for the better as Gift of Gab came on stage accompanied by DJ Xcel spinning the beats. Xcel and Gab formed Blackalicious back in ’92 in Davis, Calif. While Gab is a large man in his 40s, which keeps him from moving around the stage a lot, he doesn’t let it stop him from capturing the crowd’s attention with his tongue-twisting internal rhymes and animalistic lyricism. Imagine a bear with the ability to growl out intricate lyrics at ease and you have Gift of Gab.

Blackalicious immediately commanded attention as they stepped onstage, shouting for everyone to step up and put “[their] hands in the air!” They began with one of their most famous singles “Alphabet Aerobics,” which starts with a slow, old-school beat that Gab spits to, but it slowly gains speed until the audience is left astounded by his mastery of articulation. He then got the crowd completely involved, teaching them to sing the harmony to his hit, “Deception.” The crowd belted out “La de da da da de da,” as he sang, “His first single was an overnight success hit / and now he went from wearing rags to his best fits / all his new acquaintances, gassed his head, taking it / to the point where he lost perspective.”

It’s refreshing to hear from a hip-hop artist that isn’t fascinated with new cars, chains and hooking up. In the middle of “Blazing Arrow,” Gab called for DJ Xcel to stop the music, and stated, “If you’re blessed with a challenge, utilize it, be true to yourself and smoke humble.” Gab speaks about the real world and stays true to his roots; something that seems to have become lost in the mainstream rap game. Blackalicious is here to let the world know that true hip-hop still exists and indeed has a voice.

Gab’s lyrical style isn’t the only thing keeping him at the top of the game. The man is a  true showman. During his hit “World of Vibrations,” Gab fell off the stage, but instead of letting this ruin the song he immediately stood up and, without missing a line, sat on the stage at eye-level with the crowd and kept rapping. It was like being at the HUB with a few friends, standing in a circle, freestyling back and forth. He broke the barrier the stage presents and became one with the crowd, something that led to this show to being truly unique.

Blackalicious finished their set with “Sky is Falling” and “Chemical Calisthenics.” The beats were the unsung hero of both songs, consisting of an old school hip-hop style with elaborate tweaks that made them their own. Rebels to the Grain did everything they could to save the show, but Blackalicious was the hero. They are here to prove that lyricism is alive and well in the hip-hop world.