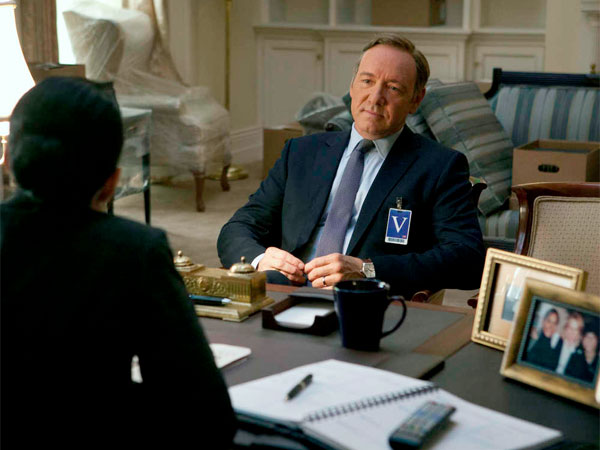 Netflix has officially released their original series, “House of Cards.” The entire first season is comprised of 13 one-hour episodes and has been available in full since Feb. 1. The decision to release the season in its entirety is an interesting strategy by a company that has dominated the movie rental business for years, and I plan to review each episode on a weekly basis. I’ll continue with Chapters 4 and 5.

Francis Underwood is a painfully stubborn man. In “Chapter 4,” he has a hard time passing his education bill because he stands firm on his decision to include a collective bargaining clause. He also refuses to have his wife, Claire, accept a $1.5 million donation from San Corp.

Spacey naturally owns every scene he is in, but his acting is stronger than the storyline this time around. “Chapter 4” was disappointing because all of the underhandedness involved was exhausting. Even though I usually enjoy the show’s sinister plot lines, it only served a menial purpose. Underwood could have easily altered the bill, and this is what the president and Chief of Staff Linda Vazquez suggested. However, it would unlike Underwood to submit to someone else’s demands––even if it is the president of the United States.

Underwood’s plan involves a lot of supporting characters. He threatens and schmoozes a multitude of fellow congressmen, including David Russmen (Michael Siberry), the head of the black caucus Terry Womack (Curtiss Cook) and the main target, Bob Birch (Larry Pine). Birch is the speaker of the House, and Pine has some great moments playing the role, especially as he insists to Frank that the education bill will fail under his influence.

I expected Frank’s lackey, Doug Stamper (Michael Kelly), to have a more prevalent part, but his tasteful shrewdness was missed during this episode. But to my surprise, Corey Stoll gave a wonderful performance as Russo. During “Chapter 4,” Russo is pressured by Frank’s heavy hand to close a shipyard in his district. Although the shipyard helped Russo get elected and is the reason he strived for politics in the first place, the congressman has no choice but to sacrifice his ambition. 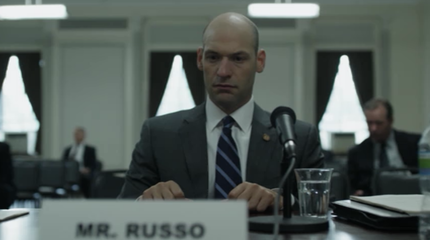 Russo is no longer just a depraved addict. He is a passionate man who hits the bottle when he loses his purpose. Russo is becoming a very entertaining character, and even his girlfriend, Christina Gallagher (Kristen Connolly), has some lovely moments as the woman desperately trying to hold Russo up.

Meanwhile, reporter Zoe Barnes (Kate Mara) deals with her own struggles. Thanks to Margaret Tilden (Kathleen Chalfant), the owner of “The Washington Herald,” Zoe is offered the position of chief White House correspondent. Her superiors, Tom (Boris McGiver) and Janine (Constance Zimmer), are unhappy with Tilden’s choice, but play along for a little while. Barnes and Underwood have their typical flirtatious and manipulative back-and-forth conversations. I felt Mara’s acting lacked its usual oomph this episode. She plays her role too submissively and only gives the episode the kick it needs during the last few minutes.

“Chapter 5” caught me completely off-guard with the way the love affair between Underwood and Zoe is handled. Apparently, sex with someone else isn’t an issue if it is used as power play, but Zoe doesn’t know this. I am impressed with the show’s decision to take this unique spin on adultery because it does work.

Zoe will remain Underwood’s puppet, and will prove to be very useful now that she has quit her job at the Herald and is being propositioned by every newspaper in Washington. Unfortunately for her boss, Tom, he is forced to resign after using the “c” word and letting Zoe leave the building. Mara does a decent job as the talented reporter who needs a clean slate to really find her niche. The only problem is that Mara’s performance is overshadowed by McGiver and Chalfant; I wish I could see them together more often.

It is good to see Marty Spinella back on the Hill and Stamper back in action. Doug reprises his role as an intimidating backseat driver. Michael Kelly truly has a knack for the governmental right-hand man role. Al Sapienza is delightful as Marty, the man who vies for being Frank’s ballbuster. Marty is unsuccessful, but it is fun to watch him get bumped down a peg despite his attempts to organize protests and gain support for opposition against Underwood’s education bill.

Mr. and Mrs. Underwood ignore Marty’s protest, which takes place right outside a fundraiser that Claire has organized for a project she intends to carry out in Africa. Frank is able to gather many suits from the Hill to come down and donate some money to the cause, but it is really just a play to make him look better against Marty’s feeble attempts to do the opposite. Robin Wright’s character is more interesting this episode since the audience gets a deeper look into her past love affair with an artist named Adam Galloway (Ben Daniels). I’m attracted to the storyline as much as Claire is to Adam.

Spacey is perfectly evil this episode and I’m glad that his performance is not undermined by the plot. One menacing scene in particular involves Corey Stoll and Spacey together where the story arches to a game-changing level. Spacey masters the scene and shocks us as he says “Oh, and if you are going to take the coward’s way out, make sure to cut along the tracks, not across them. That’s a rookie mistake.” Although Underwood was compelling, “Chapter 5” would have never succeeded without Congressman Russo.

Thanks to Underwood, Russo will gain more respect in Washington since he has a plan that could possibly get Russo elected as governor. Russo does not know this during the majority of the episode, and instead of concerning himself with any campaign, tussles with his emotions during the entirety of the fifty minutes. He is back at the bottle and on hard drugs, but one cannot help but sympathize with the man who lost everything he was working toward. Stoll is superb in this episode. Anyone else would have made Russo seem pathetic, but instead of shooing him away, audiences are empathetic. It is also nice to get a glimpse into Russo’s true potential. We know that although he could be powerful and persuasive, it is not currently possible–which is what makes his character so intriguing.