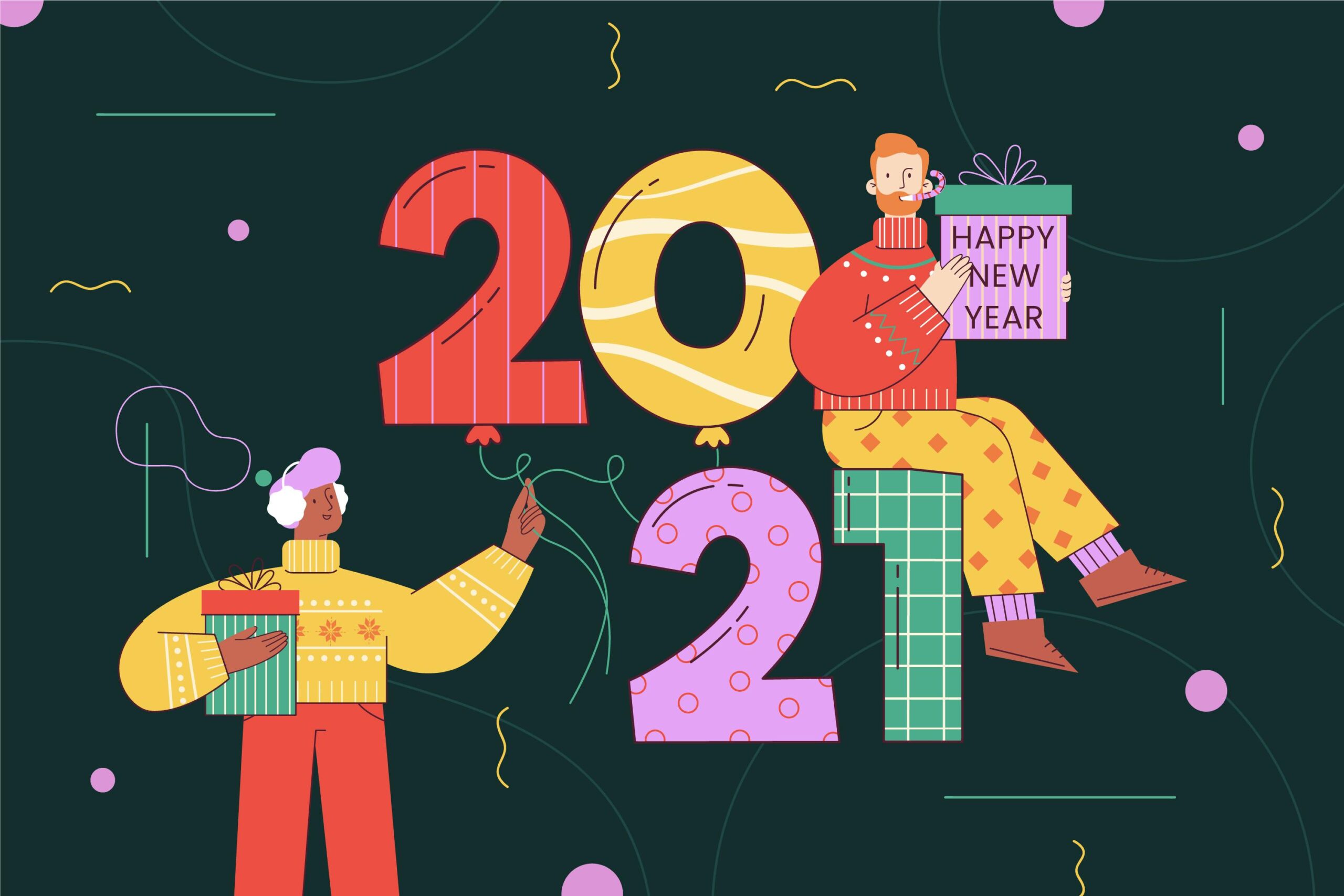 Raging wildfires, a sweeping global pandemic, a turbulent presidential election and much more, the year 2020 has been incredibly unrelenting for everyone in the U.S. and around the world. Though the approach of a few calamitous events has been hinted at in years past — police brutality cases and global warming both contributing to huge social unrest and continual wildfires, respectively — no one could have predicted that 2020 would become the year of incessant disaster. Still, despite the lows of last year, there have also been some happier moments in between to celebrate that are unique to every individual.

The Highlander spoke to five students about their own personal experiences while navigating through 2020, also discussing their concerns and hopes for 2021.

Rika Chilstrom immediately affirmed that one of the worst situations to come out of 2020 was the inability to see loved ones, namely her friends. She added that it was jarring to suddenly veer from going on spontaneous boba runs with her friends to being afraid of seeing them at all.

Even so, Chilstrom found a silver lining in that she was unexpectedly able to develop a better relationship with her parents, courtesy of being home so often. During her time spent at home, she also became a self-proclaimed “plant lady.” “I guess I’ve learned to love to take care of people and things, as I’ve been taking care of elder family members and plants during COVID,” Chilstrom stated.

When asked about online learning, she explained that her grades have never been better. Still, according to Chilstrom, while her grades have been excellent, she admitted that her work ethic has suffered greatly. “Instead of becoming a better student to deserve my better grades,” she clarified, “I’ve really just gotten lucky that my professors have made class so straightforward to get an easy A.”

In the new year, Chilstrom is concerned for her club, the Nikkei Student Union, a sociocultural organization in the interest of Japanese American history. She is worried about the pandemic-induced stress that new leadership will endure. Chilstrom also expressed concern over the way people will start behaving now that the vaccine is undergoing distribution. “Just because we may have gotten the vaccine doesn’t mean we can instantly go back to the way things were,” she stated.

In terms of her hopes for the near future, Chilstrom stated that she is really looking forward to watching her plants grow and also finishing up her graduate school applications. She is hoping to be accepted into a UCR program in particular and would love to experience the campus again “in full effect.”

Like many others, Ravneet Dhah’s life changed a lot over the course of the last year. However, he was also quick to acknowledge his luck, stating that missing his friends and being barred from the gym were only some of his major worries.

Dhah admitted that there was an unfortunately small number of good experiences that he had in 2020 but added that he was able to make new friends online through gaming and Discord, an instant messaging and digital distribution platform. For Dhah, Discord has been one highlight during his time in quarantine; he joined some UCR student communities from last spring quarter and has felt much more connected since. “Students being able to congregate in a safe community was what I wished for, given the negative impact of COVID-19,” he explained.

In regards to his experiences with online learning, Dhah struggled with the initial transition but eventually enjoyed some relief. The majority of his classes were asynchronous with his professors being flexible in their grading and teaching process, and as a result, his grades have seen an improvement.

Now in the new year, Dhah worries over the country’s sociopolitical climate and what might happen due to Trump’s extremist supporters, as is evident by the riotous storming of Capitol Hill by Trump supporters and protestors. He is also a little fearful that the pandemic will last yet another year, as the numbers worsen for Americans. “I have so much resentment for those who are going to parties, not social distancing and not wearing a mask,” he stated. “I am doing my part in preventing COVID from spreading, and I hope others are too.”

However, Dhah is anticipating that the future will also bring better things. Despite divided behavior regarding coronavirus etiquette, he remains hopeful that COVID-19 is nearing an end now that the vaccine is undergoing distribution, and that he, along with other UCR students, will be able to return to campus and hit the gyms soon.

In Hanh Nguyen’s case, the worst part of 2020 was undoubtedly contracting COVID-19. It had been passed onto her via her mother, a healthcare professional. Nguyen stated that isolating herself from her family was exceedingly difficult and depressing, especially during the new year celebrations. “When you’re alone, time is distorted and you don’t remember if it’s Saturday or if it’s Sunday,” she explained, adding that her daily life just became so routine and blurry in memory.

However, Nguyen did have some better moments in the last year, like doing well academically and earning a high GPA. She also met her boyfriend, who she cited as one of the people who has continuously supported her throughout the difficult times, like her experience with coronavirus and emotional burnout from finals.

In regards to dealing with remote learning, Nguyen felt that there were clear pros and cons. Overall, she has been appreciative of the online format, purely because everything is more easily accessible. However, the inability to make connections with classmates and professors while attending in-person courses has been a definite negative point.

When thinking about 2021, Nguyen expressed both excitement and apprehension over the new vaccination administration. “I am looking forward to the COVID vaccines so I can see all my friends and loved ones again,” she stated. However, she is also fearful that even with the new inoculations, the virus will continue to keep people indoors and isolated well into this new year.

For Steven Yang, the worst aspects of 2020 were no contestation. When UCR turned to online classes during last spring quarter, he had to return home to the Bay Area. According to Yang, the lack of social interaction and the transition to online classes took a definite toll on his mental health. Yang affirmed that he had the most fun before the state went into quarantine mode during the last spring quarter, but once he returned to living in Riverside, he was no longer so isolated and was able to enjoy spending time with people in his immediate vicinity once again.

As of now, Yang stated that he is much more accustomed to online learning than he had been initially. “I have had a lot more personal time since a lot of classes have been catered to accommodate everyone,” he stated.

When looking to the future, Yang expressed his readiness to move on. He stated that he is excited for graduating, preparing for life afterward and for learning new things outside of the classroom. However, he harbors strong concern over having to apply for jobs after graduation due to the overwhelmingly negative effects that the coronavirus has had on the job market.

For Diana Moua, 2020 has been marked by personal loss. While moving from her home in Merced back to Riverside for the start of fall quarter, she was informed that her grandmother had passed away. According to Moua, it had been a long fight against a failing kidney, and her grandmother had been admitted to the ICU, where they were not allowed to visit her during her week-long stay due to COVID. She affirmed that this was by far the most devastating low point of the last year. “It was really hard for me to grieve alone when all of my family were back at home grieving together,” she stated.

Though Moua is grieving still, she maintains that there were better parts of 2020. She found solace in coming back to Merced, despite the common complications of having to work from home. Moua told The Highlander that the time she spent while at home allowed her to reflect upon her first two years spent at UCR and the personal challenges that she faced. “I was adapting to a new environment and kind of lost myself as I was trying to find and create myself,” Moua explained, adding that through introspection, she was able to reorient herself and set her priorities straight.

In a similar vein, Moua admitted that online school has been an excellent experience so far. Taking asynchronous classes while living at home has reportedly allowed her to plan her schedule with more ease while saving money on gas and parking permits.

When thinking about 2021, Moua expressed worry over the well-being and health of her family, explaining that she has experienced a large loss of immediate and distant relatives over the course of last year. Even so, she still sees positivity in the future. Moua stated that she is looking forward to making small changes to her daily life in order to create a better experience for herself, as well as for others. “I cannot wait to continue learning and growing from the experiences that I will create this year,” Moua concluded.