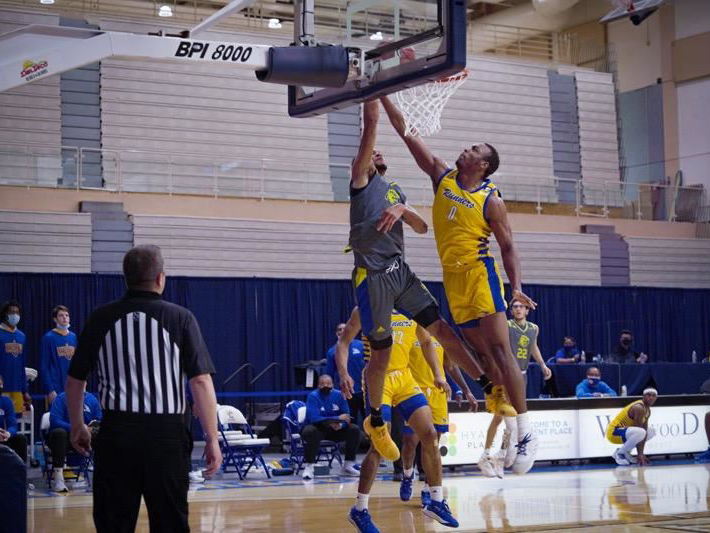 On Jan. 22 at 4 p.m. in the Student Recreation Center at UCR, the UCR men’s basketball team battled the California State University, Bakersfield (CSUB) Roadrunners, which was newly admitted to the Big West Conference in July of 2020. Despite a close battle, The Highlanders ultimately lost in the last three seconds 45-47.

In the first quarter, CSUB formed a solid 9-2 lead until Highlander point guard Flynn Cameron and redshirt senior forward Arinze Chidom narrowed CSUB’s lead with back-to-back steals, bringing the score to 9-6. By the end of the first half, Zyon Pullin scored 7 points, bringing the Highlanders to a narrow 22-20 lead.

With approximately 14 minutes left in the third quarter, shooting guard Wil Tattersall scored his second 3-pointer, giving the Highlanders a 35-26 lead. However, the Roadrunners quickly recovered when the Highlanders missed three straight free-throws.

The game remained tight and by the fourth quarter, UCR led by as many as 9 points and led by 8 points with only eight minutes left in the game. Again, the Roadrunners chipped at UCR’s lead, tying the game 43-43 when senior guard/forward Taze Moore of CSUB scored a layup with only 2 minutes and 56 seconds remaining in the game. With the game still tied at 43-43 with 1 minute and 23 seconds remaining, Chidom charged down the center of the lane and assisted UCR in regaining their tight lead over the Roadrunners when he scored a layup.

With CSUB with the possession, UCR secured their 11th offensive rebound of the game; however, they were ultimately fouled. This gave on a put-back attempt after grabbing one of their 11 offensive rebounds on the night. After both teams fouled and scored free throws, the game was once again at a nail-biting tie, 45-45.

UCR had a slim chance to regain their lead. However, senior center Jock Perry came up empty on his 3-pointer attempt with only 18 seconds remaining in the game. With their subsequent possession, senior guard Czar Perry of the CSUB Roadrunners passed the ball to Moore, who had charged across the baseline. Without wavering, Moore scored a high jump mark of seven feet, securing their win over the UCR Highlanders 47-45 with only three seconds in the game remaining.

The Highlanders were unable to secure a shot before the buzzer sounded to secure the end of the game.

The Highlanders went against CSUB again on Jan. 23, winning 70-63, which secured them fourth place in the Big West Standings 4-2.