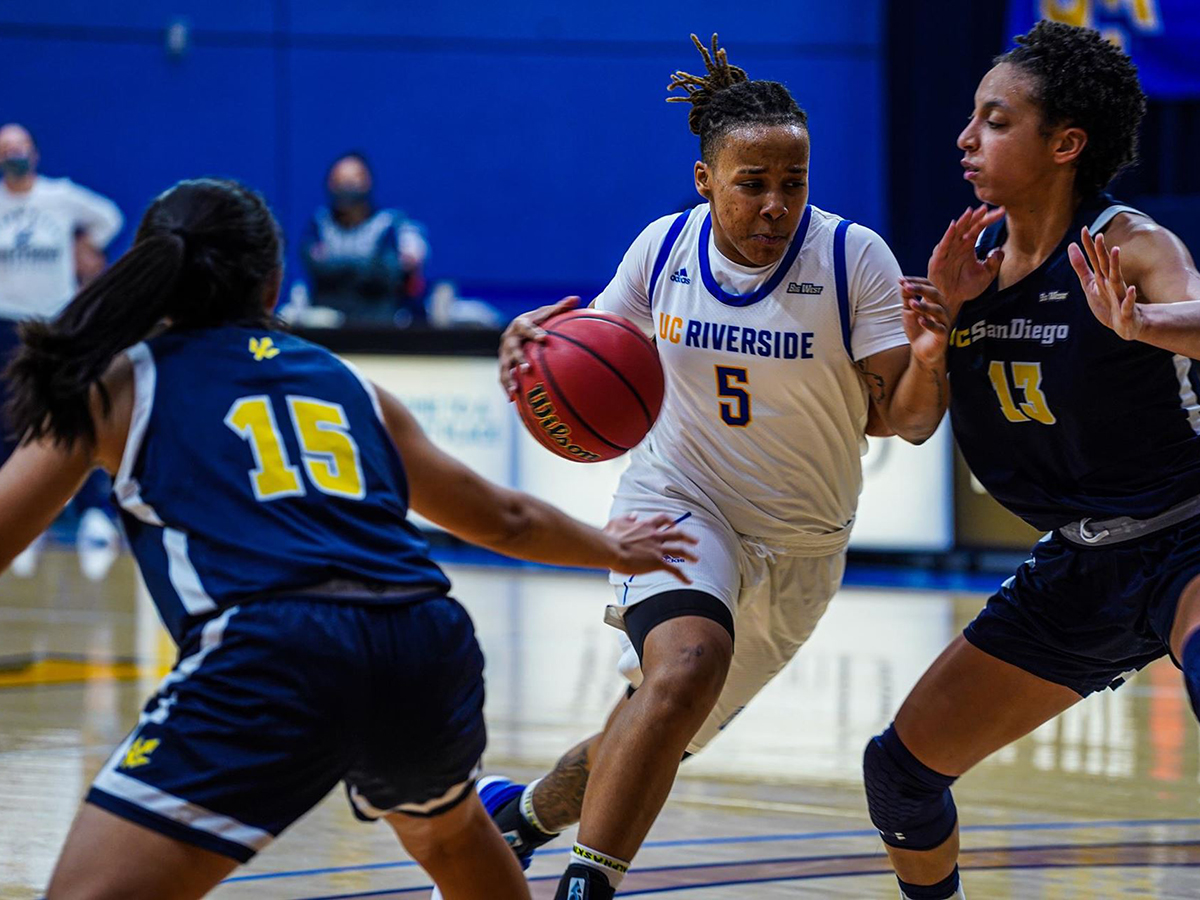 UCR’s women’s basketball team played their second game against UC San Diego (UCSD) on Saturday, Feb. 20. After an intense game against the Big West newcomers, they drew another loss. After both of this weekend’s games ended in losses, UCR now has a conference record of 5-7.

UCR came into the game by opening the board with a jumper. UCSD replied with a 3-pointer, but a free throw in the Highlander’s favor put them in the lead by a point, 3-4. This prompted both teams to go back and forth, trading the leader position. UCSD tried breaking away by trying to create a lead, but UCR managed to keep them at bay. The push and pull resulted in both teams tying 16-16 with 2:29 left on the clock. UCSD managed to get some momentum in the final minutes of the quarter, going on a 7-2 run and closing out the quarter 23-16.

The Tritons came into the second quarter with a brief 5-0 run. UCR put a stop to them with a 3-pointer from sophomore guard Georgia Ohiaeri. Shortly after, the Tritons were awarded a free throw, which was sunk by freshman forward Aishah Brown. Brown sunk a 3-pointer right after, to which UCR replied with an 8-0 run. The scoreboard was now 32-29 with just under four minutes left. Unfortunately, UCSD kept finding the back of the net and scored 11 more points while UCR only scored 4. The Highlanders were then awarded two free throws but only made one, leaving the scoreboard 43-34 at half-time.

Going into the second half, UCR attempted to close the gap created in the second quarter. The Highlanders opened up the half with a jumper, which prompted another push and pull for both teams. Unfortunately, the Tritons’ charge proved too much, gaining 8 points while the Highlanders gained 7. This left the scoreboard 51-41. This prompted UCR to tighten up, going on a 9-3 charge which left them 54-50 at the end of the third quarter.

Going into the final minutes of the game, UCR kept their intensity in an attempt to find the victory, scoring a jumper early on. UCSD went on a 6-0 run, to which UCR replied with another jumper. Both teams managed to sink a 3-point shot, leaving the score 63-57. With four minutes left in the game, both teams pressed on, each seeking victory. Unfortunately, UCR came up short despite the intense final seconds of the game. The Highlanders fought to the very last second to close the gap but ended up losing the game 74-67.

UCR’s lack of free throws, 3-pointers and rebounds ultimately led to their loss. UCSD was 17-23 at the charity stripe while UCR was 9-14. The Tritons sank nine 3-pointers in the game while the Highlanders only sank three. UCSD also landed 43 rebounds while UCR earned 29. The Highlanders fought hard to the end though; sophomore guard Jada Holland earned 21 points for her team aided by senior guard Keilani Cooper, who scored 16.

When asked about the team’s performance, Head Coach Nicole Powell said, “I thought today our intensity was better, it wasn’t there the whole 40 minutes like it needed to be, but I thought we really showed some grit at times, and that was really positive.”

She continued, “This weekend exposed some things that we need to do better at. Some basic, fundamental basketball things that we haven’t carried with us from the beginning of the year. We’ve kind of regressed in some basic shell principles so that’s what we will focus on this week.”

Coach Powell noted that she’s leading a very young team. Despite that, she’s proud of the team’s overall success.

“I want us to be sound fundamentally. We’ve done that, at times, really really well. But the mark of a successful program is consistency. We are growing. We have five freshmen, we are really young. It’s been a huge learning curve,” stated Powell. “Overall, I’m really proud of certain moments, but we are striving for more. We’re definitely able and going to get to that level of consistency to be a great team, but it takes some time.”

The Highlanders will play their final two-game series of the season away against UC Santa Barbara on Feb 26 and 27.