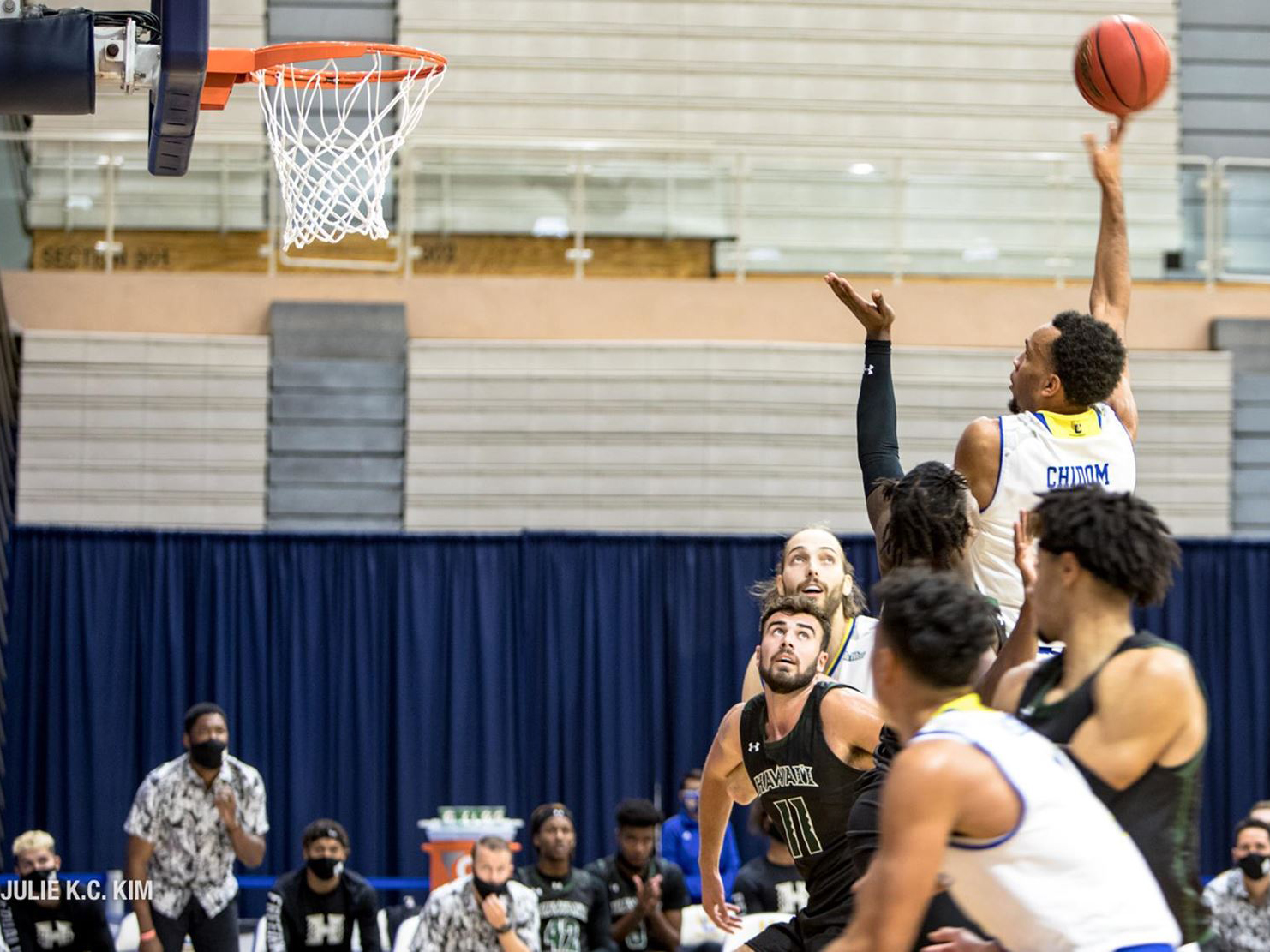 Sitting atop the Big West conference standings at number one, UC Santa Barbara (UCSB) has been one of the toughest teams to beat in the 2020-21 basketball season. The Gauchos (17-4, 11-3) boasted a school record with a 13 game win-streak and were one win away from clinching the No. 1 seed for the Big West Tournament. However, the UCR men’s basketball team (11-7, 6-4) denied UCSB in a dominating performance to win, 68-52 on Saturday, Feb. 27.

Unlike the previous game, UCR jumped ahead early and maintained a double-digit lead throughout the majority of the contest. Both teams are conference leaders in defense and therefore it was a low-scoring affair in the first half. However, it was a particularly tough night offensively for UCSB, as they uncharacteristically struggled to find a rhythm. Sophomore point guard Zyon Pullin got the momentum going in UCR’s favor by scoring the first 2 points of the game within one minute. UCSB’s freshman forward Amadou Sow scored their first 2 points at the 15:22 mark in the first half from a rebound. It remained close in scoring within the first 10 minutes, but UCR began to pull away as they continued to capitalize on UCSB fouls and turnovers. Nearing the end of the half with 4:16 left to go, Pullin was fouled by sophomore guard JaQuori McLaughlin, which allowed him to score two free throws to increase UCR’s lead by at least 10 for the first time. Concluding the first half of scoring for UCR was a 3-pointer by junior point guard Flynn Cameron, increasing the team lead to 34-20.

The game remained out of reach for USCB, as the Highlanders kept the momentum going strong into the second half. UCR’s offense was clicking on all cylinders as every player scored at least 1 point. The rebounding efforts led by redshirt freshman power forward Oliver Hayes-Brown with 11 total rebounds also contributed to the team’s success. Despite an 8-0 run by the Gauchos with 12:03 remaining, UCR remained dominant and responded with a 9-2 run of their own. Unfortunately, redshirt senior position forward Arinze Chidom got hurt and was taken out of the game near the end. He was seen on crutches at the end of the game.

The Gauchos finished at 36.5% of their shots a season low of 52 points. Pullin led the way with 21 points, redshirt senior center Jock Perry 11 points, Cameron 8 points, Chidom 8 points and Hayes-Brown with 11 rebounds.

The UCR men’s basketball team has overcome a lot of adversity this season. In response to the huge team win over the No. 1 team in the conference, Head Coach Mike Magpayo responded, “This is a very good win for the program and for our team. Wire to wire against the first place team after a close loss last night shows that our group has heart and character. I’m not surprised by the resiliency because they have done it before, just proud.”

Magpayo expressed excitement about the team’s momentum moving forward. “The win to me officially establishes us in the Big West. UCSB was as hot as any in the country (with a 13 game win-streak) and to end it took a high level performance, the kind we hope to keep putting out as we close the regular season and into the Big West tournament,” he said.

Understanding that the future of the athletics program is currently hanging in the balance, Coach Mike Magpayo replied, “I think our AD Wes Mallette is doing a great job putting our program in front of a national TV audience and for UCR basketball to perform like that really both nights on ESPN says to the university, ‘are you nuts?!’”

He continued, To think about getting rid of such a promising athletic program that helps so many young student-athletes accomplish a dream of going to college is something I cannot fathom. To be the only UC without an athletic program just doesn’t even cross my mind.”

UCR will conclude its regular season facing Big West opponent Cal State Northridge in another weekend series in Northridge, California through March 5 to March 6. The win over UCSB moved the Highlanders into a third-place tie in conference standings.