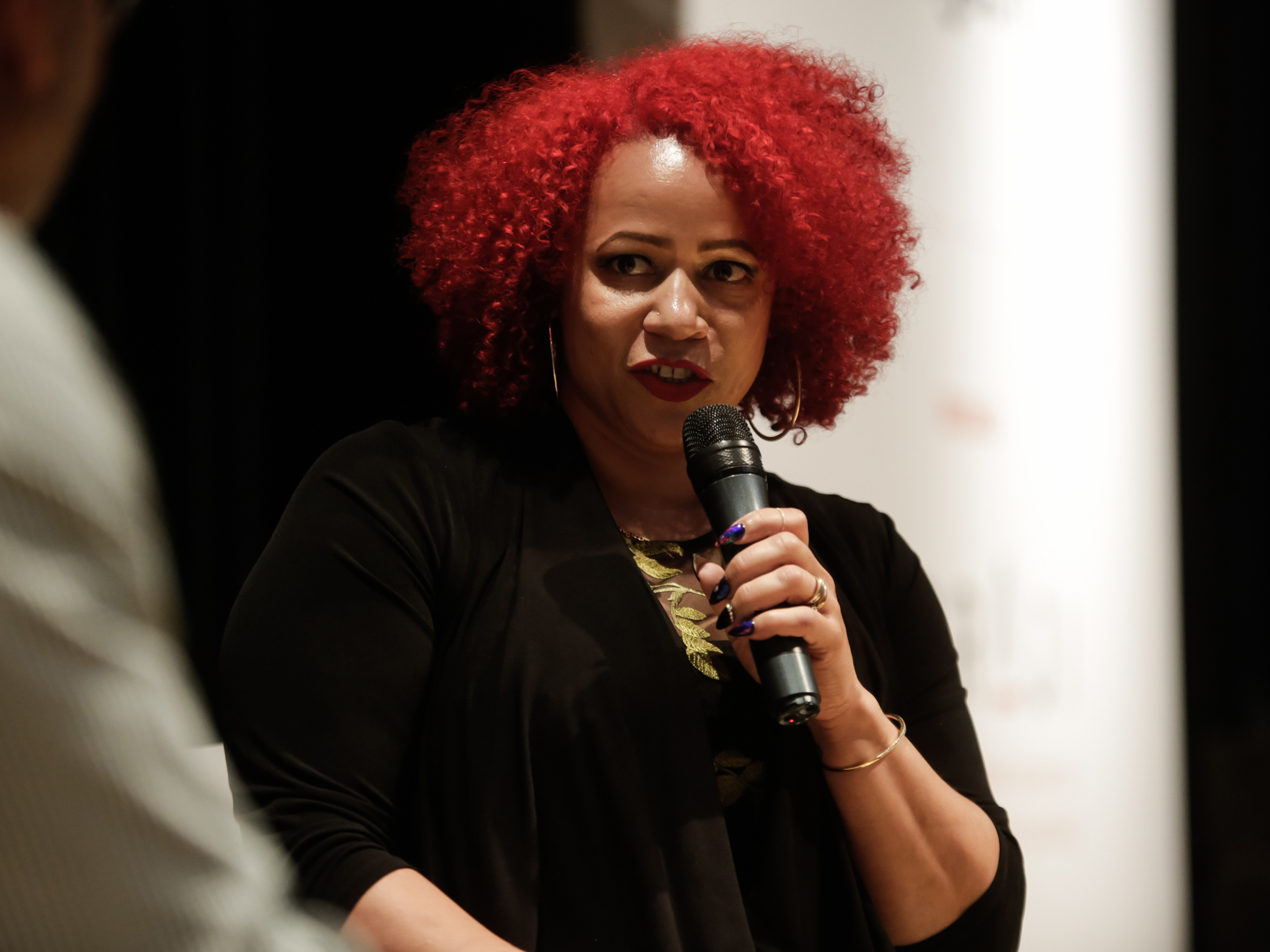 Nikole Hannah-Jones is a Pulitzer Prize-winning reporter covering racial injustice for the New York Times Magazine. In 2020, she won the Pulitzer Prize for her essay in the 1619 project, which traces the central role that Black Americans have played in shaping the U.S. The project aims to reframe the country’s history by placing the consequences of slavery and the contributions of Black Americans at the center of our national narrative.

On March 5, Hannah-Jones participated in UCR’s 52nd annual Hays Press-Enterprise Lecture. The conversation was moderated by UCR Professor of Philosophy Myisha Cherry, who hosts the “UnMute” podcast where she interviews young, diverse philosophers about various social and political issues. Cherry and Hannah-Jones discussed various issues within media and journalism such as neutrality and objectivity in heightened political times, as well as Hannah-Jones’ particular interest in covering segregation in New York schools.

Growing up in Iowa, Hannah-Jones always had a particular interest in journalism while reading the newspaper with her father every morning. At 11 years old, she became interested in politics and published her first letter to the editor about Jesse Jackson’s failed presidential campaign in her local newspaper. At the time, she was outraged at his lack of support in Iowa and her letter gave open criticism, writing that it was probably due to him being Black. That continued in her high school years when she wrote a column in her school newspaper called “From the African Perspective.”

Throughout the lecture, the two discussed remaining neutral in situations where that may seem impossible. Journalism is about promoting democracy, stated Hannah-Jones, especially in times of heightened political conflict such as the Capitol Hill insurrection. “We get into journalism to hold power to account,” she said. She also emphasized the importance of local news, especially in a time where information is spread so widely through social media that it has become difficult to distinguish factual coverage. Having watchdogs to sit in on local school board meetings and city council meetings is just as important as covering a national story because that is where decisions are made that directly affect the people, she said.

Cherry also highlighted Hannah-Jones’ 2016 article in the New York Times Magazine, “Choosing a School for My Daughter in a Segregated City.” Hannah-Jones reflected that when she first began her coverage of school segregation and education in Durham, North Carolina, the No Child Left Behind Act had just been passed. The act was meant to test and develop assessments for students in basic skills, and their results would determine the amount of federal funding and resources each school would receive. The issue with the No Child Left Behind Act, said Hannah-Jones, was that heavily segregated school districts were punished for not achieving the same test scores as neighboring white districts.

Hannah-Jones stated that while she was working to cover these school districts as a 27-year-old journalist right out of journalism school, she noticed that none of the people who called themselves activists and advocates for the desegregation of the Durham schools were actually sending their kids to them. That story and her experiences inspired her to write about her daughter’s school, which unexpectedly became embroiled in debate when district officials in Brooklyn, NY suggested moving students from an overcrowded white school in the district to her daughter’s mostly Black school.

Hannah-Jones calls herself a realist. When it comes to being optimistic about the future of progressive education in the U.S., she said it is impossible to do so when “Black kids are as segregated as they were away from white kids in the 1970s, Latino kids are more segregated than they were in the 1970s and white children remain the most isolated and resourced rich kids in our public school system.”

“I’ve never found a single place in America where Black kids in heavily Black schools have the same resources as white kids,” she said. She criticized the tolerance that society and the U.S. has had toward inequality in the education system as well as American exceptionalism. There is something particularly corrosive about being in a country that is founded on ideals of freedom and liberty during a time where Black people were not seen as completely human, said Hannah-Jones.

Since it was published, the 1619 project has received ample pushback and criticism from many. In September 2020, it even resulted in executive action from former President Donald Trump, who criticized the project and similar efforts to teach slavery and systemic racism in school, suggesting that they were anti-American. “Outside of my Pulitzer, that’s my greatest honor,” she joked. She stated that such harsh criticism speaks to the true power of journalism and only emphasizes how meaningful the project is for Black people in the U.S.

To conclude, Hannah-Jones spoke directly to young journalists interested in covering racial inequality and social issues. She said it is important to dig deeper, to ask questions and to be curious and criticize the way society functions in order to have their work create change. She stated, “Don’t be satisfied.”