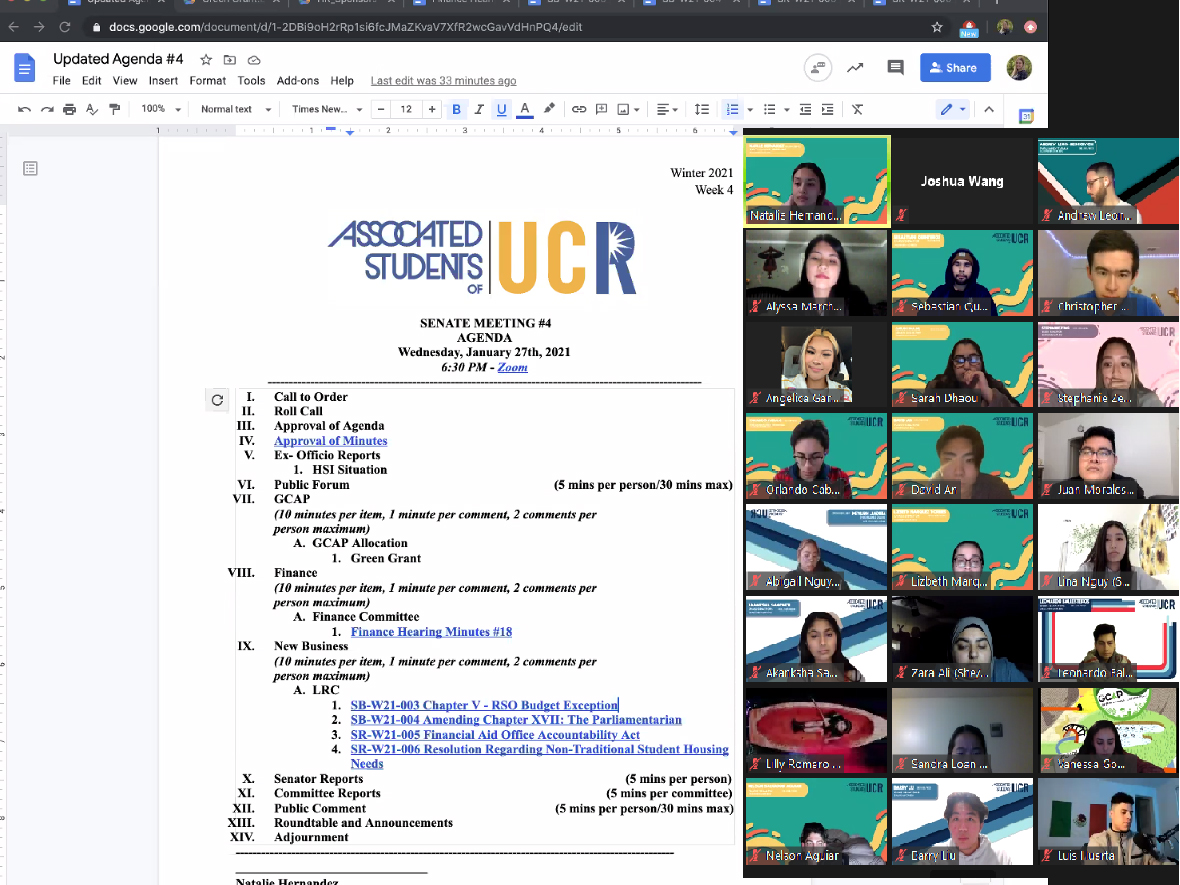 With ASUCR elections right around the corner, ASUCR is patching up discrepancies within their Elections Code and gearing up for spring quarter.

During LRC, the senate approved an amendment to the Elections Code to remove the deadline to file a violation form on the elections website. Previously, violations were subject to a 2-day limit for filing; however, the senate bill states that all violations are essential and must be addressed. SB-W21-007 Amendment to Elections Code to Remove Deadline to File a Violation passed with a vote of 9-0-7.

The senate also passed SB-W21-009, amending the Elections Code for efficient practices. This piece of legislation pertains to a standing rule that was voted on at last week’s meeting. The issue that arose was that the majority of the senate filed for re-election. Chapter 7 of the Elections Code stated, “ASUCR Senators, Directors or Executive Cabinet members who have filed to run in ASUCR Elections or are planning to run, must recuse themselves from voting on any bylaw changes, resolutions, or new bylaw additions, or all affairs regarding elections after candidacy has been filed. Failure to do so may count towards election strikes, the assigning of which shall be determined by the Judicial Council.” This means that any member of ASUCR who filed for candidacy would be unable to vote on any piece of legislation up until the ASUCR elections on April 23.

SB-W21-008 amended those sections of the Elections Code and now states, “ASUCR Senators, Directors or Executive Cabinet members who have filed to run in ASUCR Elections or are planning to run, must recuse themselves from voting on any bylaw changes, or new bylaw additions for the entirety of the election period (beginning from the deadline of filing for candidacy to the announcement of the election’s outcome).”

The bill also clarifies that in the event that two or more senators are candidates for the current election cycle, they must abstain from voting on any bylaw changes or new bylaws due to conflict of interest and up until the day after elections results are announced. Furthermore, once election results are announced, all elected officials who are current senators must abstain from voting on bylaw amendments that pertain to the office that they will assume at the start of the following year. SB-W21-008 Amending Elections Code for Efficient Practices was approved with a vote of 6-2-10.

Members of the executive cabinet updated the senate on their efforts throughout the past month. During his update, ASUCR President Luis Huerta discussed his meeting with various work groups on campus including the Instructional Continuity Workgroup, the Athletics Workgroup, the Campus Safety Taskforce and the Commencement Working Group.

Vice President of External Affairs Vincent Rasso also updated the senate on an eventful month for his office. Throughout the month, Rasso was an active member of the UC campaign to Double the Pell Grant and participated in multiple meetings and ongoing social media action to advocate for more financial aid for students. Rasso also chaired the monthly UC Student Association meeting in February and discussed issues related to the impact of COVID-19 on UC students.

During her updates, Executive Vice President Natalie Hernandez also welcomed CHASS Senator Melanie Grigorian to the senate after the resignation of a CHASS senator last week. At time of publication, the identity of the senator who resigned is unknown. She also announced GSOE Senator Stephanie Zeng as Senator of the month for February. “Senator Zeng constantly assures she represents every community at UCR to the best of her ability,” stated Hernandez. She also praised Senator Zeng for her natural positive attitude and professional demeanor during meetings.