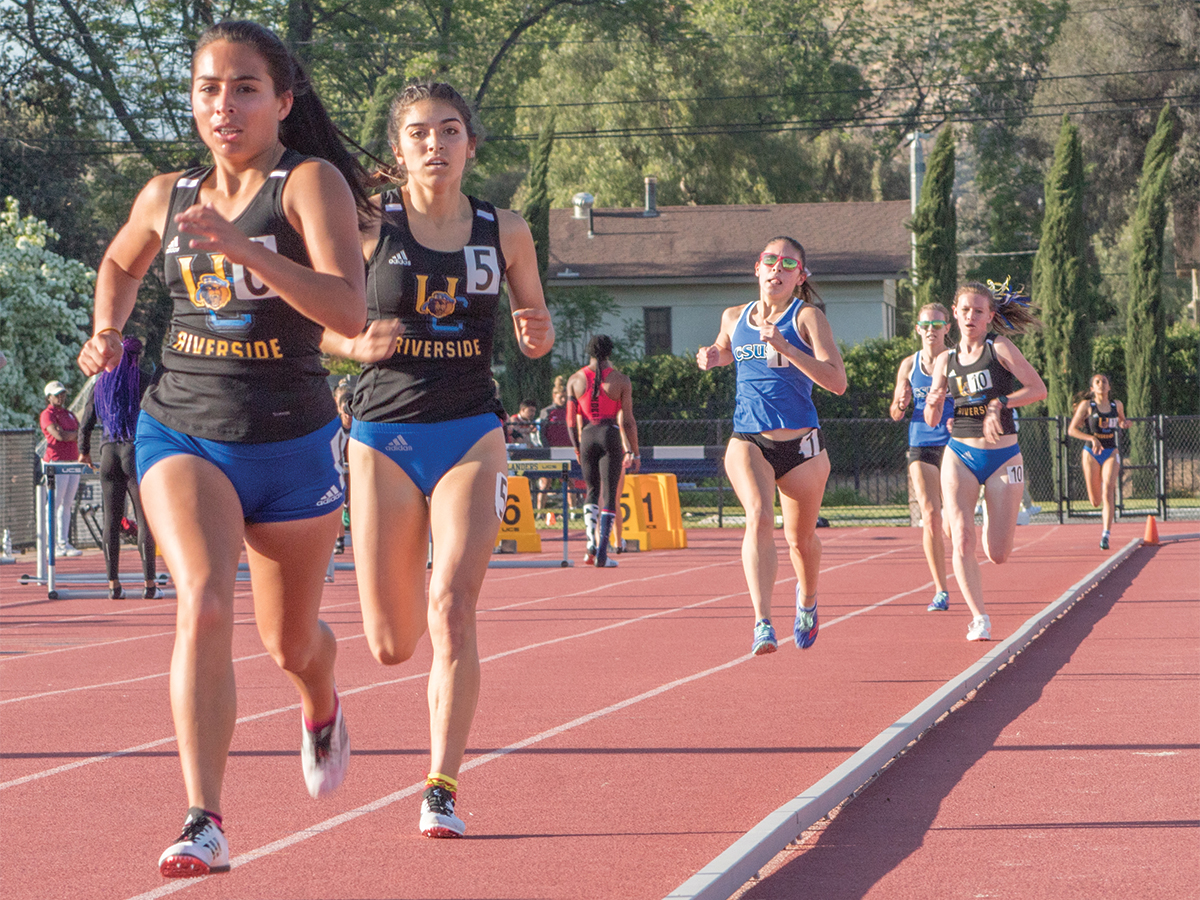 UCR’s men and women track teams recently participated in the Bryson Clay Invitational hosted by Azusa Pacific University. The two-day event took place on Friday, April 16 to Saturday, April 17. The many different events extended from early in the morning on Friday to late at night on Saturday. Friday consisted mainly of preliminary events, while Saturday consisted of the final races plus a few other events like the triple jump. Many Highlanders managed to demonstrate amazing talent by placing high across different events.

Women’s
For the women’s team, freshman hurdler Monea Jennings placed first in the women’s 100-meter hurdles preliminary round, earning a time of 14.5 seconds. This impressive feat landed her among the greats in Highlander history, becoming the seventh fastest in the program. Freshman hurdler Nia Jones also demonstrated great ability, earning herself a lifetime best for the same event at 15.20. This earned her eighth place in the preliminary event, and both earned a spot in the final round of the event but did not start.

Freshman distance runner Carolinh Calvert managed to make waves by placing not only at the event, but also in the records at UCR as well, making her lifetime debut in the 3,000 steeplechase event. After an intense set of 7 ½ laps, Calvert stopped the time at 10 minutes, 45.91 seconds, which landed her in eighth place at the event. Impressively, her time earned her third place in the Highlander record books. This race being her first, Assistant Coach Rob Hansen recognized her talent, grit and potential for future races. “Once the gun goes off, Carolinh is not afraid to stick her nose in a race and compete against anybody. This was an exemplary debut, and with a bit more experience, she’ll be able to clean up her hurdling and really do some damage in this event,” he stated.

Sophomore Delaney Harris also managed to advance past the preliminary stage, placing eighth overall in the women’s 200-meter dash, with a time of 25.33, a new personal best for her. In the final, Harris made her team proud, placing third in the final stage with a brand new personal best by a very small fraction of a second, 25.32.

On the field side of things, freshman Shiloh Corrales-Nelson placed third in the women’s hammer throw event, throwing a distance of 49.52 meters and fourth in the shot put event with a distance of 12.22 meters. Nelson also placed in the discus throw, earning sixth overall. Sophomore Purnima Gunarathna found herself in an incredible seven-way tie for the women’s high jump event. She jumped a total of 1.53 meters. Gunarathna also placed for the triple jump, earning the No. 9 spot with a distance of 11.13 meters, this time with no tie.


Men’s
Many athletes on the men’s team also managed to make an impact this weekend. Senior distance runner Arman Irani managed to run a strong race, earning him a new personal record in the men’s 5000-distance run. Landing in 16th place, Irani’s time was 14:03.66. Irani’s eligibility for the race had been up in the air the week prior to the race due to a potential injury. Fortunately for him, he was able to perform and landed third place among UCR records. Freshman distance runner Andrew Jackson also made new marks, earning eighth place in the men’s 800-meter race. His time of 1:52.16 knocked about a second off his most recent personal best.

Freshman hurdler Joshua Lee placed seventh overall in the men’s 1,100 hurdles preliminary event, with a new personal best time of 15.30. This earned him a spot in the final of the event, where he placed sixth, breaking his personal record from the day before with a new time of 15.24. Junior hurdler Quinn Williams also managed to advance to the final round in the men’s 400-meter hurdles, after placing eighth overall with a time of 56.38. He was able to surpass his time in the final heat, 55.28, yet still remained in eighth place in the final.

Both the men’s and women’s teams will compete again at the Northridge Invitational on Saturday, April 24 hosted by Cal State Northridge.