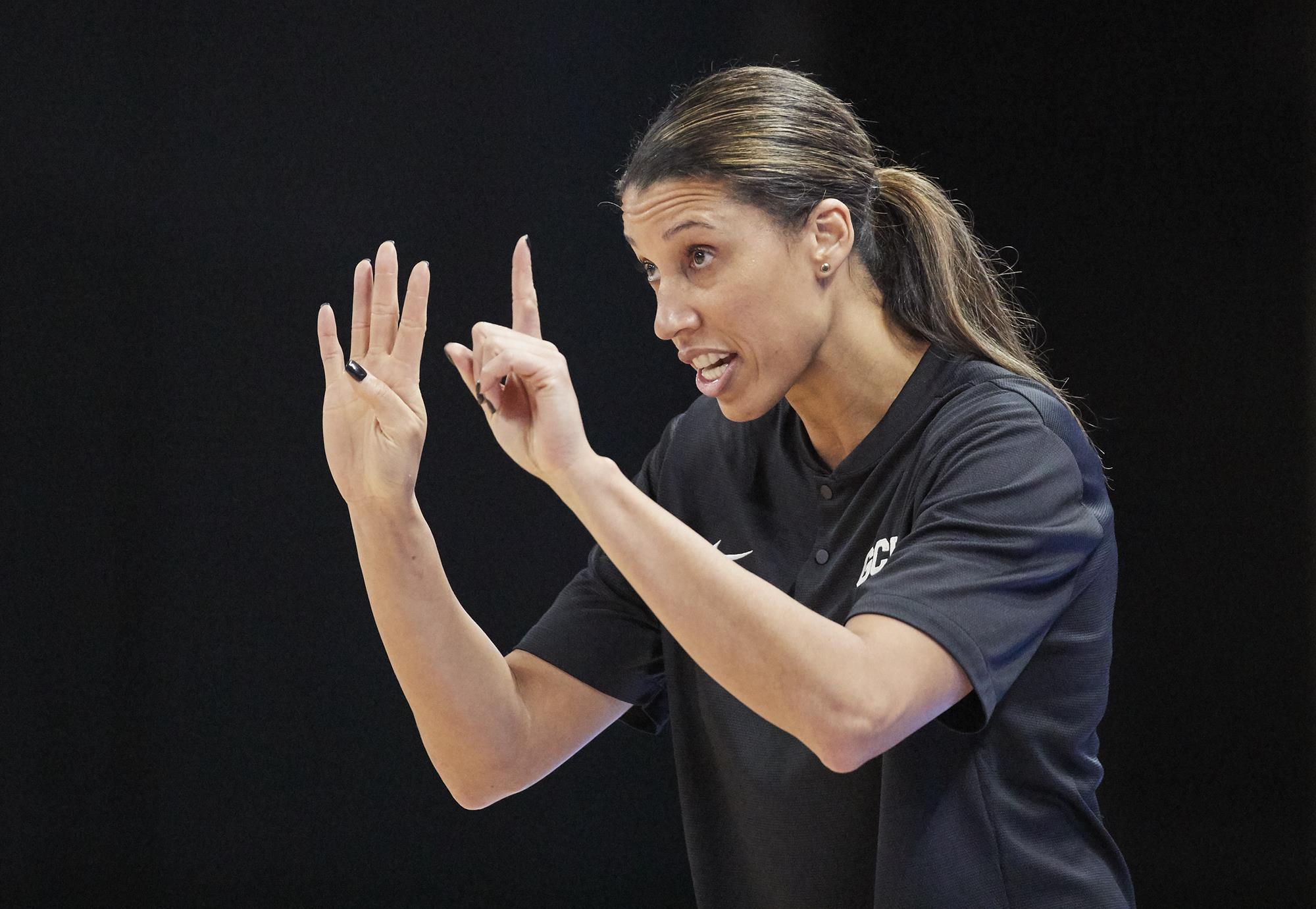 After many ups and downs this past season, the head coach of the women’s basketball team, Nicole Powell, is enjoying her time at home with her family and 11-month old baby. This past season was full of memorable moments of victory and a dash of uncertainty. Powell was announced as head coach in March of 2020, but due to the pandemic, she could not meet the team in person until seven months later in October. During her first year, Powell made history with the Highlanders being the first team to beat USC in an intense 54-52 victory. Additionally, she also helped athletes on the team make history with Jordan Webster earning the Big West All-freshman honor 一the second time in the program’s history 一 and Keilani Cooper earned the All-Conference selection honor.

“We had a lot of Zoom meetings; that’s how we first met. I think there was just a real willingness and openness to accept myself and our staff from the student-athletes,” said Powell. She added that it was their attitude that did that; that was their choice, and by them embracing that kind of approach really allowed everything to move forward in a special way even though we couldn’t do it in person till October.”

Powell got introduced to the world of sports from a very young age. As a child, her father played basketball every opportunity he could, oftentimes going to the local gym and playing there, and her mother was involved in the local parks and recreation program. “It was just kind of a way of life growing up. We went to the park a lot, and it was kind of a family culture,” said Powell

Heading into high school, Powell continued her love of sports. She participated not only in basketball, but also in tennis and track, even going on to win a state title in badminton and discus throwing. It was there, in Mountain Pointe High School in Arizona, where her basketball career really began to take off.

After high school, she received a scholarship to play basketball for Stanford University in Northern California. At Stanford, Powell came in as the Pac-10 freshman of the year in 2000. Throughout her time as a Cardinal, Powell scored over 2,000 points and gathered over 1,000 rebounds. Powell also earned various accolades, becoming a three-time All-American, was the Pac-10 player of the year in 2002 and 2004 and was named the MVP of NCAA’s tournament of the Midwest Region. She also made history by earning multiple triple doubles through her collegiate career at Stanford. “It was life changing for me,” said Powell. In between high school and college, Powell also competed in the 2000 FIBA Americas Championships, earning gold with USA’s U18 team in Argentina.

“We didn’t know what was going to happen. We were just there; we were so young. I’m just grateful to USA basketball, and just the game again has just changed my life and opened up my eyes and taken me to places I literally couldn’t have imagined that I would be so I just feel very fortunate to have these experiences,” said Powell

After her time in Stanford, Powell began her professional career in the WNBA. In 2004, she was drafted as the third overall pick by the Charlotte Sting. Across 10 years and 11 seasons of basketball, Powell played not only for Charlotte, but also for New York Liberty, Tulsa Shock, Seattle Storm and most notably the Sacramento Monarchs, where she played from 2005 to 2009. During her time in Sacramento, Powell continued to improve as an athlete, earning the WNBA’s most improved player award. That same year in 2005, the Monarchs, of which Powell was a key member, went on to win the championship title. In 2009, she also participated in the All-Star Game, scoring a total of 21 points. In the offseason, Powell also competed professionally in Eastern Europe. She played in Turkey, Russia, Spain, Italy and Poland.

In 2014 and during her last season with Seattle, Gonzaga University, the head coach at the time, Kelly Graves, offered Powell the opportunity to be an assistant coach for the school’s women’s basketball team. After a year at Gonzaga, Graves accepted the opportunity to be head coach for the University of Oregon’s women’s basketball team, and Powell followed him as an assistant coach. After her time in Oregon, Powell was offered the head coach position for Grand Canyon University. During her three years there, Powell led the team to many victories, coming in second overall in the 2019-2020 season. Unfortunately, the post-season was cancelled due to the pandemic. Coming into 2020, Powell was named head coach for the Highlanders.

“Each of these paths and steps in our life are because of somebody else. The foundation was my parents, and then in high school, I had great teachers and great mentors. It’s still the same thing in my life. I have great people around me. Tamica as our AD then hired me and believed in me, and that continues with the leadership today of Wes and Michael at the top there all the way up to our chancellor. I am just grateful for the opportunity to be leading the program at this time,” said Powell.