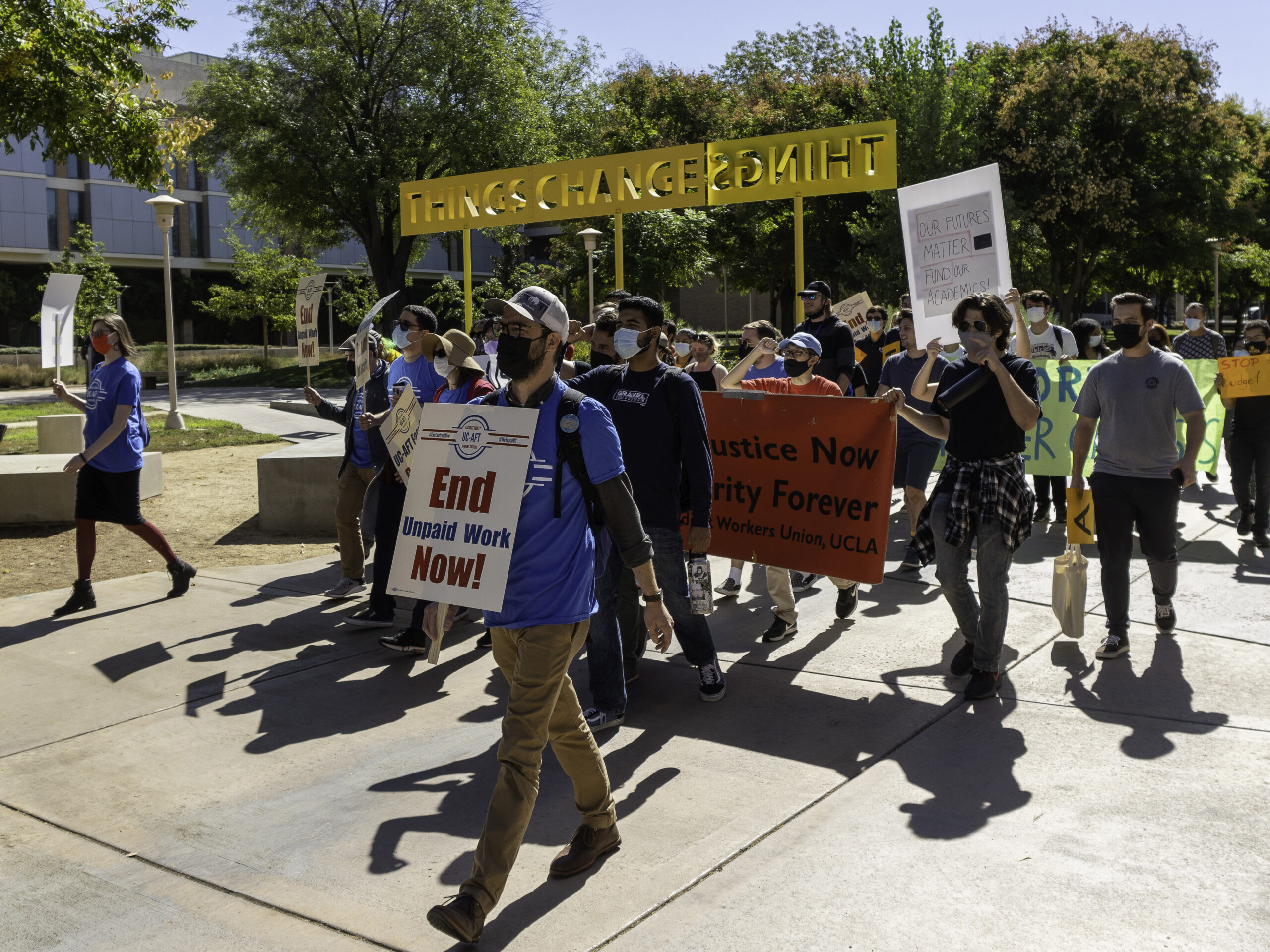 On Wednesday, Oct.13 at 11 a.m., a rally was held on campus in response to UC President Drake imposing a budget cut on UCR by 8.2%. The rally gathered at the Bell Tower and marched throughout campus with about 50 attendees calling for the UC system to stop “redlining” UCR.

ASUCR-External announced in an Instagram post that they were “demanding President Drake stop redlining UCR and give our campus the proper and equitable funding required to support our faculty, students and growing community.”

“Redlining” is defined as denying funds or loans to a certain person or group because they are considered a financial risk. To the members of the rally, however, it’s discrimination based on many factors — race, location and social status.

The rally started with speeches by a lecturer, an undergraduate student and Somchate Wasantwisut, a Ph.D. candidate and member of the UAW 2865 Academic Student Employee union. The speeches condemned the deprioritization of UCR by the university system. The crowd then marched to Hinderaker Hall and continued off-campus, shouting chants like, “They say cutback, we say fight back.”

Micahrae Osteria, a fourth-year media and cultural studies major, was tabling for the Letters 2 Strangers club when the crowd accumulated. “There is actually a big group of them,” she said, referring to the rally organizers and attendees. “And they were very transparent about the issue, asking everyone if they know about the budget cuts and what ‘redlining’ is.”

Last spring quarter, the department along with other UCR faculty, students and workers had discovered the system-wide funding formula proposed by UC President Drake. While other campuses are imposed a cut of around 2-3%, the Riverside campus would receive an 8.2% cut.

The issue is especially heightened by the fact that President Drake received a raise to $890,000 salary. This is noted on some of the protest signs titled “MISSING” with a photo of President Drake’s face, signifying that he is out of touch and nowhere to be found regarding this issue.

The budget cut is deemed to affect everyone in the university, and Chancellor Wilcox is in solidarity against it. In June, a petition demanding a visit from President Drake to discuss a reworking of the proposed budget garnered over 500 signatures from UCR members.

In response, the administration sent over Letitia Siles, leader of Labor Relations of the UC system, to discuss the contract. According to Wasantwisut, Siles said she sympathizes with the students on the cost they put up with while achieving higher education, and she herself doesn’t know why UCR is receiving a cut. Labor Relations suspects it’s an issue with this campus’s contract, which Wasantwisut interprets as putting some of the blame on UCR itself.

“We had nothing to do with it,” said Wasantwisut. “They kind of side-tracked and tried to calm things down.” The UC administration’s response of “calming things down” with UCR instead of addressing the situation was what led to the final rally. “That is why we are taking it to the next step — their unwillingness to move the ball forward and resolve this issue.”

This is not the first time UCR has suffered lower funds compared to other campuses. “This is on top of decades of underfunding for our campus. Other campuses get around $11,000 per student, but we get around $8,000,” said Wasantwisut.

There are several theories as to why the Riverside campus does not receive the same financial support as other UCs. One includes racism and classism. “We’re one of the most diverse campuses, and historically we’ve been receiving less funding than the other UCs,” said Aaron Goodwin, a teaching assistant for mathematics. “Our diversity is not just racial and ethnic. It’s also about social mobility. We have students who are single parents, Pell Grant recipients, etc.”

One may argue that graduate and medical schools are more expensive and “important” to run, but this leads back to Goodwin’s statement that UCR is a “social mobility” campus — meaning that a significant portion of students come from economically disadvantaged backgrounds, and their education grants the ability to mobilize themselves and their families out of poverty. This, to Goodwin and Wasantwisut, is what makes UCR so important to society.

It has been made clear that UCR is in need of abundant funding. One main reason is that, in coping with limited budget, the university is understaffing T.A.s and underpaying certain lecturers. “My T.A. sections are overcrowded,” said Goodwin, who is teaching calculus and pre-calculus to four classrooms of at least 25 students each. “My students need a lot of individual attention so we need smaller class sizes.” This amount of work would normally be divided among a few T.A.s instead of one. Other UCs cap the T.A.s at 50 students, while this is not being done at UCR.

The UCR administration has also been underpaying lecturers through a loophole known as the “adjunct professor” title. Originally meant as an entrance position for new professors, lecturers under this title have one-year contracts that must be renewed and are paid only for lecturing work. Once a lecturer has earned the full-time professor position, they enter a continuing contract and are paid for academic activities outside of lecturing as well, such as conducting their own research, mentoring students and writing letters of recommendation. This generally takes six years to earn.

Under financial pressure, however, the university has taken advantage of this position and lecturers who qualify as full-time professors find themselves still paid as adjuncts.

UC lecturers have a low rate of retention. According to a CalMatters analysis, “About a quarter or more of lecturers working one year disappeared from UC employment rolls the following year annually between 2015 and 2020.”

These lecturers are currently paid $57,000 annually, which is considered low-income in six of the nine UC locations. This unfair treatment and lack of pay is discouraging to them.

“We’re out here trying to protect job security for pre-contributing lecturers. We don’t want to strike but we will if we have to,” stressed UCR political science lecturer, Jeremy Busacca.

Because adjunct professors and lecturers are abundant and are heavily scrutinized for their performance, this is a good reminder for UCR students to answer course evaluations.

The lecturers are currently in a period of mediation with the UC system. In their contract, they are demanding reasonable workload standards, transparency, consistent appointment standards and fair compensation.

The bottom line is that it all affects the students. Not only do they need individual attention, but they need to develop relationships with professors. More information on how to support these UC faculty, along with testimonials and an online petition, can be found at weteachuc.org.