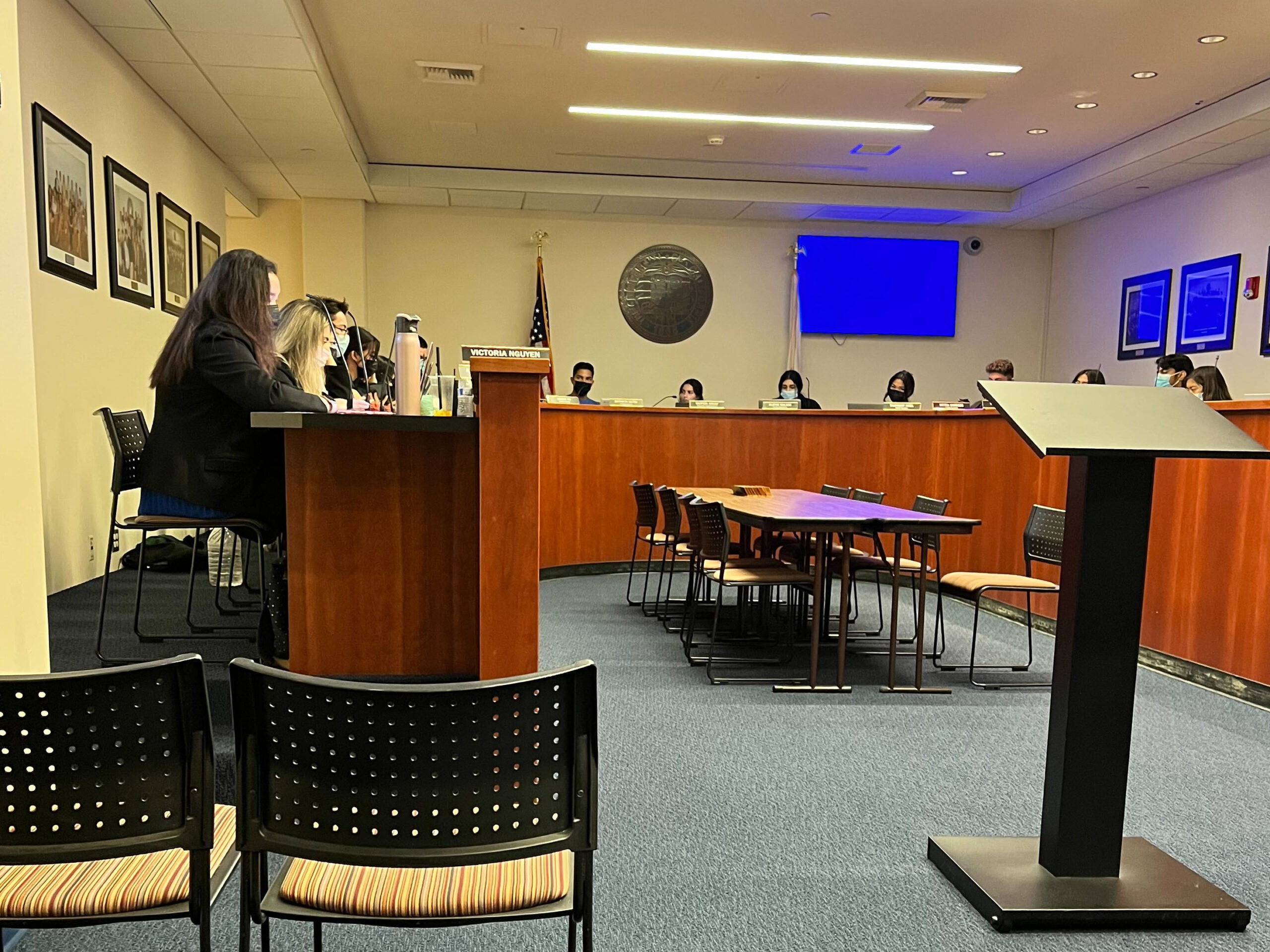 The Associated Students of UCR’s eighth meeting was called to order on Wednesday, Nov. 17, 2021 in the ASUCR Senate Chamber. All senators were present, excluding Senator Paredes. Motions to approve the current meeting’s agenda were called for by Executive Vice President Mufida Assaf and saw the movement of ex officio reports to earlier in the meeting and the replacement of Finance Hearing Minutes No. 13 with Finance Hearing Minutes No. 14. President Pro-Tempore Orlando Cabalo also motioned to add an ASUCR Supporting KUCR Student-Staff statement to the agenda while CHASS Senator Helen Chu motioned to add a CALPIRG Green Grant. A piece of legislation, SB-F21-009, was then added as part of committee reports from the Legislative Review Committee. Motions to open and approve the previous week’s meeting minutes took place as well.

A public forum then began with an introduction of Mohamad Almouazzen, Chief Justice of ASUCR’s Judicial Branch. Almouazzen came to represent Transfer Students and discussed Assembly Bill 928, a bill approved by Gavin Newsom this past October, which aims to change the transfer process. The bill modifies the current two pathways for transfers by enabling students to have multiple pathways of communication and opportunities for higher education. An intersegmental committee of representatives from UCs and CSUs will be established in hopes of creating a singular transfer pathway. However, with this reform comes a risk to students and faculty, primarily that of the communications department. Almouazzen hopes to work with the senate in order to pass a resolution to call for the safeguarding of communications courses.

Following this presentation, Bharat Rai, a former UCR student, discussed his mobile app Pickup N’ Park,  which he developed on campus during his senior year. Pickup N’ Park aims to help students find parking and carpool rides within campus. Students leaving campus can request to be picked up and taken to their car in exchange for their parking spot to students coming to campus. Students coming to campus can offer a carpool ride to pick up students on their way, or to other locations around the schools through ridesharing. Rai noted multiple statistics, including that students often pay on average $2,500 a year on parking permits and tickets.

SPP Senator Arleth Flores-Aparcio received clarification that the application will include a terms and conditions agreement to cover liability. CNAS Senator Myra Usmani and BCOE Senator David Kiroloss both expressed their concerns regarding the safety measures that would be implemented and Rai clarified that a three-step verification process would be included to ensure the app is used only by students and filter options would allow for students to better their rideshare experiences for comfort and safety.

Another presentation was also given by CALPIRG, announcing that they had achieved one of their largest pledge goals with 1,350 new members. A seminar will be held for their 30-by-30 initiative that resolves to have 30% of land preserved by 2030 and a canned food drive will be held as part of Hunger Awareness Week.

Ethnic and Gender Liaison Jeanine Nassar delivered an ex officio detailing her work for the week. This report included a meeting with student leaders from African Student Programs, along with Senators Do and Syed, and saw a discussion of how ASP students can be supported with input from the leaders.

As part of committee reports, motions were called to open Finance Hearing Minutes No. 13 for the finance meeting which took place on Nov. 17, 2021. A total of $6,758 was allocated to a variety of programs and clubs on campus, including $1,329 for Fencing at UCR and a grant of $1,098 for UNICEF at UCR. The meeting minutes were approved with a vote of 16-0-0.

Two pieces of legislation were subsequently reviewed following its approval from the Legislative Review Committee.

The first piece of legislation reviewed was Senate Resolution, SR-F21-014 In Support of UAW 2865. The resolution consists of ASUCR calling upon the University of California, Office of the President to reverse the imposed 8.2% budget cut. With this resolution, the senate voiced their support for UAW 2865’s Anti-Redlining Campaign and will have them put out a statement in support along with spreading awareness to the campus and organizations. The resolution passed with a vote count of 16-0-0.

Senate Bill SB-F21-009 was revisited since last week’s meeting and sees the amendment of Chapter LV of the ASUCR bylaws regarding ASUCR Social Media Guidelines. The bill adds a disclaimer to statements that ASUCR makes, as requested by the office of the Vice Chancellor of Student Affairs, and authorizes the Judicial Council’s official Instagram page. The disclaimer reads, “The views and opinions expressed by ASUCR are intended to reflect those of the undergraduate students of UCR, and not necessarily the University of California Riverside, and reflects that statements released or posted by ASUCR reflect the views of the student population and not the faculty or administration.” The bill passed with a vote count of 17-0-0.

New Business was then reviewed and first saw ASUCR reading out their statement in support of KUCR and their situation regarding internal administrative issues. Christian Valdez, a KUCR DJ, expressed that staff at the radio station were cut without prior notice during the pandemic and with this cut, student involvement began to decrease heavily. Former staff were not allowed to return in voluntary roles, and Valdez reported that management were absent when he reached out for communication. The statement by ASUCR is in support of the staff during this situation and calls for a meeting to occur between management and workers in hopes of a positive resolution. The statement was supported by a vote, with a count of 16-0-1.

Additionally, a GCAP Green Grant Application was reviewed for CALPIRG. The application saw the organization request support from ASUCR’s Green Campus Action Plan for their Bee-Friendly Campus Initiative. CALPIRG hopes to increase the abundance of native plants, providing nest sites and reducing the use of pesticides.

The meeting concluded with senator reports from Senators Garcia, Chavez, Do and Aparcio. Announcements included detailing the time and place for the walkout in opposition of Provost Watkin’s announcement to 95% classes to be in person. In addition, a CHASS Town Hall would be held as well and would see a visit from the CHASS Dean. BCOE Senator Amy Do also announced a project she is working on to add a laundry quota for students on campus, in a similar fashion to the printing quota. The meeting was then adjourned at 7:47 p.m.