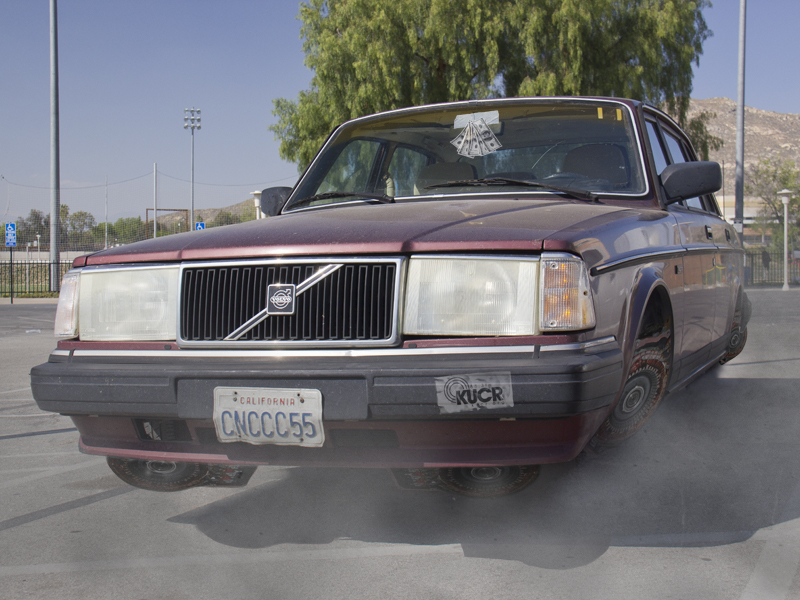 We all face daily struggles as we go about our ordinary daily business. We all struggle with wiping the sleep from our eyes when our I-Dosers force us to awaken. We deal with the monotonous drudgery of listening to dull robots in lecture drone on about the history of oranges. And we can all relate to the experience of having our brain chips malfunction, leading to embarrassing or misleading thought transmissions to our friends and sometimes even our professors.

But for commuters, there is an additional struggle on top of the homework we have to transmit to our professors and class data we have to stream to our brains, a struggle that the UCR administration seems determined to ignore. Out of all the trials and tribulations us students are put through as we attempt to learn a skill and get a career, one is by far the worst: simply getting to campus.

By everyone’s standards, commuting is a hassle at best and a complete waste of time at worst. The traffic on the transport lanes is atrocious, and the backlog is enough to turn leaving a half-hour early into an apology to the professor for being late. Angry and aggressive drivers who threaten to burn your Flying Transport Vehicle (FTV) to cinders are commonplace. And if we do make it through the gauntlet of honking horns and unsignaled swerves, we have to compete with other frustrated commuters as we dredge Lot 240 for an empty space.

But by far, the worst problem for commuters is the excessive cost of doing so. A de-levitating permit for the de-levitation lot furthest from the campus costs an exorbitant $500 per quarter. If students want to park closer, or park at night, the rates skyrocket so much that you practically have to take a second job to pay for it. Besides that, commuters pay through the nose to recharge our fuel cells. When you place the monetary burdens on top of the temporal ones, commuting becomes a daily dread. No wonder some students decide to skip class in favor of sleeping in—the daily torture isn’t worth it.

Unlike our UCR brethren who live in the Glen Mor 2,000 apartments or in the Aberdeen and Inverness and Dunfermline and Cumbernauld (A&I&D&C) Residence Halls, we travel a large distance every day just to get to school. While a trip to the Biology Building for a student living in the dormitories is as easy as hopping in one of the free transportation pods of the Campus Active Transport System (dubbed CATS by the community), commuters are faced with a long and tiring struggle day after day. While students who live on campus exclaim, “Let’s take CATS!”, the high cost of driving your FTV to and from campus every day causes commuters to utter different four-letter words.

And why should they not? As commuting has become increasingly pricey, UCR seems content with jacking up the prices of de-levitating permits and squeezing an increasing number of students into the same number of spaces, paying no mind to the needs of the most populous constituency on campus: commuters.

UCR has nominally reached out to commuter students by offering 30-hour energy bars at so-called “Commuter Breaks” for a handful of times per quarter. But though it is nice to have that extra boost of energy for the entire day, distributing energy bars does nothing to solve the actual problems facing commuter students: the prohibitively high cost of commuting and the lack of de-levitating spaces available.

The accessibility problem can be easily dealt with. All UCR must do is take the rather simple step of expanding the current de-levitating lots that dot UCR and create more spaces for FTV users to de-levitate their vehicles. There’s plenty of empty space available in the air above us and it is readily usable. Not taking advantage of that free air leaves UCR looking like a college campus ripped from the 21st century, an image that is not representative of the proud university that stands above all the others for its vast array of academic and athletic achievements.

Now to tackle the cost problem.

Commuting students now have to pay a minimum of $500 for a permit for a single quarter. Of course, paying this much results only in the ability to de-levitate in a lot nearly a mile from campus. If you want to park any closer, the costs increase exponentially. For the closest de-levitating lot available to students, Lot 30, the cost rises to more than six hundred dollars.

These costs are far too high and hit students where it hurts most: the pocketcard. In a world where the newly-privatized UCR’s tuition has surpassed that of Harvard, students can’t afford to spare another penny. We shouldn’t be forced to choose between parking and paying our lab fees. But this is exactly what UCR’s administration is making students do.

The end result of the exorbitant prices is in no way positive for UCR. Students frustrated over the traffic-jammed freeways and the high de-levitation prices are more likely to lose their focus in lecture and be distracted by financial and emotional problems. How can you pay attention to the anatomy of an Apis mellifera specimen when you’re worried about having to choose between paying for a de-levitation permit and your groceries?

Some students resolve this by taking a second job, but working is a time-consuming endeavor—time that could be spent doing homework or studying. If UCR students have to split their time between their classes and their work, it’s no wonder UCR has reached a 10-year low in grade point averages. Students simply aren’t able to learn as effectively with de-levitation problems on their mind.

More valuable than the revenue the university receives, though, is its reputation. If no changes are made, UCR could very well lose its luster as one of the top universities in the country. A high cost of living—epitomized by obscenely high de-levitation prices—combined with downward-sliding academics will certainly result in our reputation taking a hit. What student would want to attend a university known for its high parking prices and low academic achievement? It has taken UCR a century to build its reputation as the premier university of the nation. Is the UCR administration willing to throw a century of hard work away for the quick fix of a few hundred extra dollars?

Perhaps UCR will lose some money in the short-term by lowering the cost of parking permits. But the cost of the status quo overshadows those miniscule losses by a long shot. Not only will academic achievement continue to slide, but students will become increasingly dissatisfied with what UCR has to offer and slowly drift away to other colleges that are more sensitive to students’ interests. UCR’s reputation will wilt, leaving it to be nothing but a decaying vestige of what was once a proudly blooming flower in the Inland Empire.

Do we want to keep raising de-levitation permit prices and become that atrophied plant that is only remembered for once, long ago, being verdant and green? Or do we want to make UCR a more welcoming environment for students and continue to blossom, unfurling our petals to meet the shining sunlight of a bright future?

The choice is entirely up to UCR’s administration. Let us hope they make the right one.