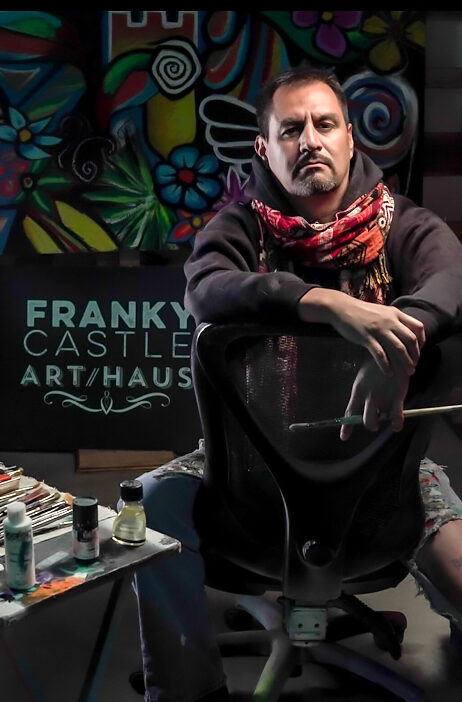 Southern California local, Francisco “Franky” Castle, is passionate about the arts. I met Castle at Riverside’s monthly art walk. He was willing to sit down with me and tell his story. Castle was born in Guadalajara, Jalisco, Mexico, and left for the states at the age of three. His parents were determined to achieve the American dream in Anaheim, California. Castle’s father became a carpenter, and his mother began working at a local factory. Castle grew up in a neighborhood that served as a home for various gangs. With the gangs residing in his backyard, Castle was exposed to drugs and violence. However, the neighborhood also showed him the beauty of graffiti.

Castle has always been interested in the art of graffiti as he was fascinated by the graffiti on the New York subway. Castle and a couple of friends from his neighborhood began to tag areas in Anaheim with graffiti. He slowly realized that he possessed a natural gift for painting, leading him to spray paint throughout high school. Alongside his visual artwork, Castle also found a new passion for music and performed in a band. At one of his shows, he and his band were pushed into a fight. The police were called to the situation. Castle was arrested for aggravated assault and was sentenced to six months in jail. This gave him a wake-up call in jail when an officer asked him, “Why are you even here?” Castle felt that his life was going in the wrong direction. Castle was soon released from confinement and aimed to find a high-paying job.

Unfortunately, Castle was turned away from every employer because of his criminal record. After mounds of rejection, Castle decided to venture into entrepreneurship. He ran three mobile phone stores within Cardenas Markets in Southern California for 17 years. In 2016, Castle started to become sick of his routine at the mobile store. He would be working day and night with zero time for a life outside of work. He sold all of his stores in late 2016 and used his money to buy a studio space. However, at this time, Castle hadn’t touched a paintbrush in 25 years.

Castle isolated himself in the studio for 10 hours a day trying to paint a masterpiece. Castle felt that he needed something to enhance his art, inevitably leading him to drugs and alcohol that became his fuel for inspiration. He believed that tapping into that altered state of mind allowed him to create pieces that would astonish his audience. Castle fell into a drug-induced spiral that lasted for four years. During this time, he made art like he never had before while his body paid the price. Castle started to look disheveled and worn out. Castle says many paintings were ruined during this time because he was too intoxicated to complete the job.

The pandemic hit and Castle decided to get sober, as the drugs were corroding his mind and art. Castle has been sober ever since. He credits his sobriety to meditation and personal growth that came from forgiveness.

Art has always come naturally to Castle. However, his past trauma formed a “resistance” that had the power to hold him back. In the past, Castle believed drugs could suppress the “resistance.” In reality, art was the only thing strong enough to combat Castle’s “resistance.”

Castle’s Latino roots exposed him to the work of legendary activist Cesar Chavez. He directly evokes Chavez in a piece called “pick up the shovel.” The illustration depicts Cesar Chavez with a shovel over his shoulders. To Castle, the painting represents the time and effort that goes into hard work. Picking up a shovel represents the start of work. You have to get your hands dirty while practicing your craft. Castle believes in taking action for yourself. Most recently, Castle took a residency in Costa Rica, where he took this time to explore the natural aspects around him. Castle only painted one piece while in the country. The picture presented a row of trees covering a small patch of water with a sign that read: “Pura Vida.” The Spanish phrase means pure life. Castle got the inspiration from a compost site near his abode. The artist wanted to challenge himself to produce beauty out of an eyesore.

Castle is enjoying being a successful artist. He has licensed his artwork to Marshall’s, T.J. Maxx and HomeGoods. Castle hopes to rent a spot in downtown Riverside to present his work. But for now, you could enjoy Castle’s art at the monthly art walks that happen every first Thursday of the month in the heart of downtown Riverside. Castle is exposing Riverside natives to a new form of art rooted in Chicano Culture.