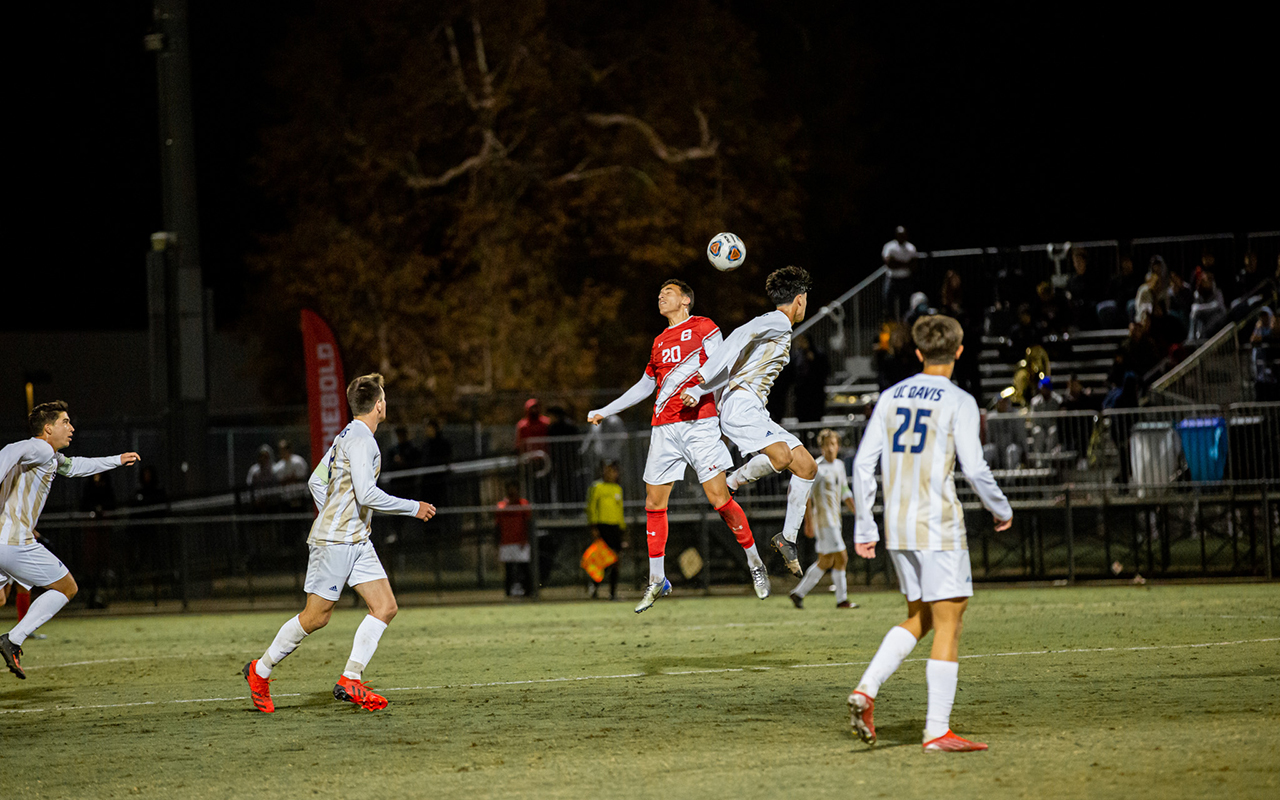 UC Riverside’s men’s soccer team had a stunning display this past weekend in the Big West semi-finals against Cal State Northridge at the UCR Soccer Stadium, winning 4-1 and moving on to the Big West Finals to face UC Santa Barbara, who defeated UC Irvine 2-1 in their matchup. The Highlanders came into the matchup favorites as the one seed in the Big West bracket. However, the pressure was very much on as they had lost to CSUN in the Big West league opener earlier in the season.

The Highlanders started the game off incredibly bright with sophomore forward Noah Lopez converting a beautiful chip over CSUN’s goalkeeper off an assist from sophomore defender Adrian Meade-Tatum just five minutes into the match. Two minutes later, senior midfielder Leopoldo Hernandez had a stunning long shot saved by CSUN’s keeper as the Highlanders found their rhythm early on. CSUN grew into the game as time went on and their first big chance came from miscommunication from UCR’s centre backs, leaving CSUN through one-on-one with junior goalkeeper Carlos Gonzales, who came off his line to clear the ball with a daring slide tackle marking the first of many impressive actions by Gonzales to prevent CSUN from having easy opportunities on goal.

The Highlanders had a few more chances as the half went on, the most notable being a shot from senior midfielder Oscar Penante bouncing off the right post preventing the Highlanders from gaining a 2-0 lead. This missed chance allowed CSUN to equalize two minutes later when a mis-clearance by the Highlanders landed at the feet of CSUN forward Enrique Pineda, who finished the chance bringing the two teams level just five minutes before halftime. The Highlanders showed amazing resilience to regain their lead within two minutes of CSUN’s equalizer when Armando Ibarra found the net for his first goal of the night.

The second half was akin to a game of chess with both teams being at a stalemate for the majority of the half. During this deadlock, defenders Aleksander Vukovic and Freymar Omarsson interchanged with midfielder Christian Ceja on countless occasions to recycle possession and stifle any CSUN chances that occurred during the deadlock. On these players’ relationship, head coach Tim Cupello said, “your defensive line is always important. As the season went on and these players are playing together more and more, those relationships are getting stronger and the guys are starting to understand how to play off of each other. The defensive line, midfield line, and forward line are now starting to really gel and understand each other”.

The Highlanders managed to break the second-half deadlock on 77 minutes through senior defender Brendan Clark, who scored off an assist from Hernandez who added to his impressive tally of eight assists on the season, bringing his season total to nine which is good for the top 20 in the entirety of Division I for assists. Tensions rose following this goal as CSUN’s AJ Johnson stamped on Clark causing the referee to show him a red card, which allowed the Highlanders breathing room being two goals and a man up effectively ending the game. The party was not over yet as in the dying minutes of the game the Highlanders scored their fourth of the match through a beautiful strike from Ibarra bringing his tally to two goals on the night. That was the final key action of the game as the referee blew his whistle less than a minute later, capping off a dominant display from UCR.

The Highlanders now look to their Big West final matchup against UC Santa Barbara next Saturday, Nov. 12, at 7:00 P.M. at the UCR Soccer Stadium. When asked about their mentality going into the final, Lopez said, “I feel great winning the regular season, but the main goal for this team is to win the Big West Championship and I want to do it again and be a part of that. We are not satisfied yet”.