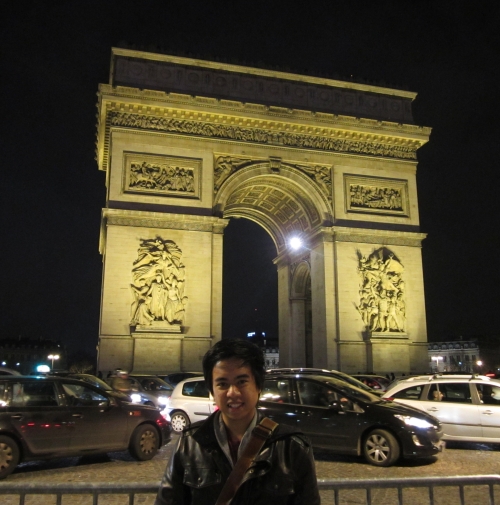 A glimpse of the French lifestyle, culture and society would be a fair summation of what I wanted to experience as a UCEAP student in Lyon, France. Did that come to fruition? Oh yeah, and much more. I got more than I wished for. It isn’t just a mere glimpse that I have experienced, I now find myself amidst the living and breathing machinery that is the French culture and society.

Let us recap from the beginning of it all.

Overwhelmed is an understatement for the feeling I felt as I finally stepped out of the Saint-Exupéry Airport in Lyon that fateful August afternoon. It felt surreal. I was surrounded by people who look completely different from us, speaking a language that I initially thought I had great command of (boy, was I wrong). I couldn’t help myself from smiling at every conversation exchanged in French. Yet, I felt uprooted from the comforts of California, home. In short, I experienced slurry of utter excitement and intense longing for home. Bienvenue à Lyon: Welcome to Lyon.

Then, reality set in quick and hard.

The first few weeks were filled with the hustle and bustle of paperwork for the university and practically starting from scratch in a new land. Within a three-week span, I “manually” signed up for classes, found an apartment, opened a bank account, got a cellphone and obtained a French residency permit vignette on my passport, among other things. Although fairly simply done, the way French bureaucracy works does not fit the “American logic’” that I am very well accustomed to. These are the realities that quickly confronted me, bringing me from the lofty La-La Land to reality that is actually living in Lyon.

For the first semester, I rented a room from an elderly couple of noble status. In no way am I exaggerating when I say it is one of the most elegant apartments I’ve ever set foot in. My room was lavishly appointed with turn-of-the-century furnishings, complete with floor-to-ceiling tapestry covering half of one wall. I often told my friends that I needed a monocle and pocket watch to feel completely at home in that apartment. Soon enough did I belong without being of nobility, or even without the requisite fashion accessories. They treated me like their own grandchild.

For the current semester, I live in a more humble, yet very comfortable apartment, shared with a French M.A. student and a Finnish Erasmus student. Living with them has been a complete change of pace from my previous home away from home. Living with young people is, as always, exciting.

One would think that it is only with French people that you get to socialize with in Lyon.

Living in Lyon, France has been nothing but short of global. Left and right, you are surrounded by not only French people, but people from all continents of the world. Frequenting Erasmus parties, I got in touch with the youth of the world. During my stay in Lyon, I have met and socialized with French, Spanish, Italians, Germans, Moroccans, Croats, Hungarians, Finns, Swedes, Belgians, Russians, Taiwanese, Japanese, Koreans, Mexicans, Rwandans, Brazilians, Chileans, Venezuelans, Australians, Canadians and last but not the least, Americans. Left and right, I am reminded that I am nothing but a small particle in the sheet that is humanity. I am reminded that I have yet to know more about the world.

As with other people who study abroad, traveling is an essential part of my European stay. And as with other study abroad students, I hold conserving money as one of the tenets I live by. Couchsurfing, thus, became a norm in my travels. Not only is couchsurfing a free means of getting housing, it is way of getting to know locals and understand a place from a local’s point of view. Plus, they ought to know where the nicest bar in town and the best hole-in-the-wall café within the 10 km radius, right? Of course they do! From personal experience, couchsurfing hosts and co-couchsurfers alike are more than willing to open up and talk about everything under the sun from intellectual ideas and politics to Rihanna’s latest hits. So, talked, I did!

Studying abroad isn’t all fun and games, we had to study as well. It is “studying” abroad, after all.

The French university system is utterly different from UC system, to say the least. Let me recount a handful of differences: classes meet once a week for two hour sessions; most of the materials are learned independently; essays are 1.5 spaced; grades are determined by only one or two exams or presentations; professors are unpredictable; all courses are taught in French, spoken at 3,000 words per second. Needless to say, you still learn quite a bit.

Language-wise, I learned a lot more outside of school than I did in school. When you are faced with a native speakers that spew French words like there is no tomorrow, every waking moment of your stay in Lyon, you have no choice but to adapt to the way they speak and assimilate. Slowly but surely, my French improved, especially when compared to the day of my arrival.

As the days inch to my return home, I introspect.

I pushed myself to my limit—it is in this discomfort that I now find comfort. I find myself more open to different cultures, to different mindsets. Participating in UCEAP is like stepping in someone else’s pair of shoes and slowly fitting in them.