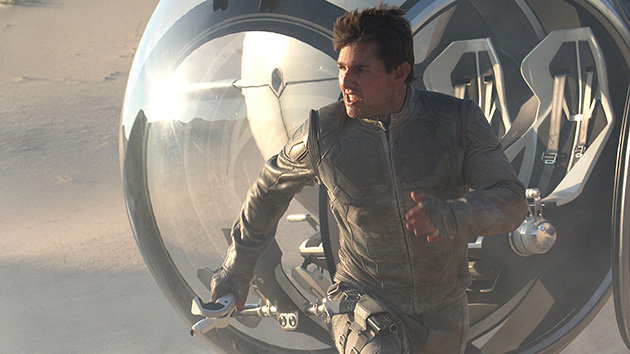 “Oblivion,” the second directorial effort from Joseph Kosinski (“Tron: Legacy”), is a visually stunning, if empty piece of pop entertainment. With a pedigree in video game commercials and graphic novels, Kosinski builds a post-apocalyptic earth that is both gorgeous and potentially menacing. Tom Cruise plays Jack Harper, one of the last humans stationed on a war-torn, post alien-invaded Earth. He and his lover/mission partner Victoria (played mutely by Andrea Riseborough) must monitor and maintain a fleet of drones tasked with mining Earth’s resources, while what is left of civilization waits above Earth’s atmosphere in a massive space station. As their mission comes to a close, Harper begins to uncover the true meaning of their increasingly ominous plans.

If the plot sounds vaguely familiar, it’s because it is. “Oblivion’s” narrative and visual palette borrow from over a dozen visionary science fiction epics, most notably Kubrick’s “2001: A Space Odyssey” and the more recent sci-fi powerhouses, “Wall-E” and “District 9.” Unlike the ambitious and introspective canon of the films from which Kosinski draws inspiration, there is no gravity to “Oblivion.” As a filmmaker, Kosinski is undoubtedly a talented visual artist, but he lacks the same zest for narrative form and context. The success of science fiction filmmaking of this scale is incumbent upon an incessant questioning of what it is to be human. This introspection is non-existent in “Oblivion.” If Kosinski utilized intertextuality in his allusions to older, better films, we would have had a deeper, more conceptually rich work.

There lies “Oblivion’s” major fault. There is no attempt to go the extra mile. With world-class actors and a $100 million price tag, the film is remarkably competent. At first glance, “Oblivion” (much like “Tron: Legacy”) is a visual feast, a film aspiring to uplift the modern Hollywood spectacle out of the bowels of mediocrity. Upon further inspection, the film is a Trojan Horse, nowhere near the visionary picture its cinematic sensibilities would have you believe. The use of an autonomous god-like machine in the film’s final act is strongly inspired by the corrupt robot HAL from “2001: A Space Odyssey.” Unlike the latter film, Oblivion’s use of a supercomputer as the film’s main antagonist is arbitrary, having no insight or commentary on the potential horrors of emerging technologies. Its involvement in the feature feels contrived and only serves to pay homage. That being said, there is a lot to like here––including a stellar performance from Cruise who through his immense physicality serves to immerse the audience in the day-to-day world Harper inhabits.

Morgan Freeman turns in strong work as Malcolm Beech, a revolutionary leader. His presence during the film’s second half gives “Oblivion” much-needed vitality as an overly long, seemingly undeserved running time begins to plague the film. Kosinski finds his strength in his action sequences. They are effective, exhilarating and immediate in direct contrast with some of the film’s more subtle moments. Though thinly plotted and conceptually weak, “Oblivion” is an above average sci-fi actioner with more than enough visual arrestment to satisfy audiences awaiting the slew of summer blockbusters in the coming months. However, those expecting a more cerebral outing akin to last year’s instant-classic “Prometheus” will be greatly disappointed.