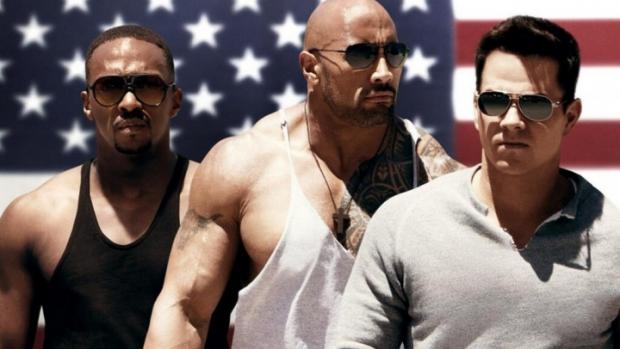 Over the last two decades, Michael Bay has emerged as one of the most lucrative directors in film history. His films are known for their heavy spectacle and lack of narrative and character development. Bay is praised by many for his contribution to pop culture and directorial inventiveness, but is highly criticized by fans of subtlety and nuance, making him quite the polarizing figure. Regardless of his detractors, Bay’s name over the last six years has been synonymous with the absurdist, massively budgeted and visual effects-heavy franchise, “Transformers.”

Enter “Pain and Gain,” Bay’s newest directorial effort. The film finds him in rare form; without hundreds of millions of dollars at his disposal, Bay has returned to the virtuoso filmmaking that first made him a household name.  The film follows Daniel Lugo (Mark Wahlberg), Adrian Doorbal (Anthony Mackie) and Paul Doyle (Dwayne Johnson) in the mostly true story of three inept, meathead bodybuilders that illegally pursue their piece of the American dream.

Writers Stephen McFeely and Christopher Markus (of “The Avengers” and “Captain America” fame) have created a goofy take on the Coen Brother’s “Fargo,” a black comedy of criminal errors. Unlike “Fargo,” the screenwriters of “Pain and Gain” have created a half-baked farce, and as is common with Bay’s films, the humor is broad. Its themes of upward mobility and economic woes are ham-fisted at best. As the characters’ motivations are communicated through dialogue, the audience is beaten to death with the the film’s exploration of the dark side of chasing the American dream: torture, death and long prison sentences. There is no subtext or grey area.

The audience has strong expectations for explosions and over-the-top action. Bay knows that better than anyone, and he delivers. This is a film that has more ambition and artistic worth than is expected or necessarily needed. “Pain and Gain” may very well be his best film since 1994’s “Bad Boys.”

Bay has been noted as having unapologetically said that he makes films for adolescent boys. This is no lie. The director shows a distinctively new strength: the ability to introspectively parody himself. “Pain and Gain’s” heightened violence and crude comedic temperament play up the director’s now-famous visual sensibilities. This serves to illuminate both his technical brilliance and senselessness to the point where the audience becomes hyper aware of his heavy-handed orchestration.

“Pain and Gain” marks Bay’s first foray into R-rated territory since “Bad Boys II” a decade ago.  This adult fare is where he truly, artistically thrives. You can see Bay smiling from the other side of the camera in some of the film’s more vulgar moments which include crushed skulls and a religiously reformed Dwayne Johnson, who attempts to woo a homophobic priest.

With a lack of CGI-based characters, Bay commands (mostly) great performances from both his leading men and his strong supporting cast, which includes veteran character actors Tony Shalhoub and Ed Harris. Shalhoub is hilarious as Victor Kershaw, a detestable rich businessman who is captured and tortured by the trio of musclemen in a lame attempt at extorting his money. Wahlberg turns in electrifying work. This is arguably his best performance in years.  As Daniel Lugo, he is kinetic, desperate and full of ill-minded ambition.

The always-charismatic Johnson is funny as the brunt of some of the film’s most comedic moments. Anthony Mackie, the usually strong supporting actor whose most notable work is the Best Picture-winning “Hurt Locker,” is the weak link of the three. One can only help but wonder if the film could have benefited from a more comically inclined actor. In scenes where both Wahlberg and Johnson fly high, Mackie falls relatively flat.

Unlike the accessible nature of the “Transformers” franchise, this film isn’t for everyone. It isn’t even for all fans of Bay’s work. However, those who have missed the visceral and aggressive nature of his earlier work (“Bad Boys” and “The Rock”) will be ecstatic about the return to his ultra-masculine, lurid and robust form. It is ironic that that Bay seems the most free with a budget that is at least a hundred million dollars less than what he is accustomed.