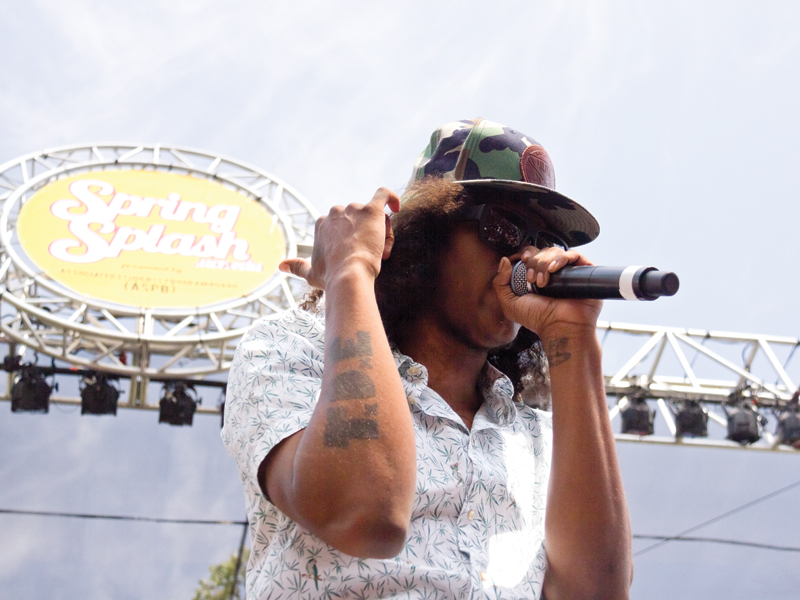 Ab-Soul was a perfect pick for ASPB’s Spring Splash lineup. He is definitely someone you’ll hear being played in a college dorm room, and given that Rick Ross and 2 Chainz were also on the ticket, the overall event promised a very particular type of hip-hop. It starts with an R and rhymes with hatchet.

Soul hit the stage a little behind schedule. But the Carson native walked the fine line between dropping science and building the crowd’s energy with skillful song choices, most of which came from his 2012 release, “Control System.” Mr. Soul Brother Number Two performed “Number Two” to beckon audience members from Pierce Lawn. Thankfully, he took his time to dish it out in its entirety. Keeping with the tracklist of his album, he then went to the smooth track, “Bohemian Grove.” He used the song to remind the audience to not forget the ladies, although he didn’t use those words exactly.

Not losing momentum with songs like “SOPA” and “Druggys wit Hoes Again,” he showcased his dynamic with fellow Top Dawg Entertainment cohort Schoolboy Q while professing his affinity for––what else––”smoking dope.” These songs proved to be a great set up to his plug of the upcoming album by Q, “Oxymoron.” The already popular track, “Yay Yay,” played for a short while, and the crowd responded positively to the minor intermission. Q’s nasally inflection cut through the bass, which sounded like the most pleasant come down ever. Soul asked the crowd about their own habits and experimentation, saying, “This is college, ain’t it?”

Undoubtedly, and a little bit ironically, the highlight of his performance was “Terrorist Threats,”  which was perhaps the most intelligent track of his repertoire that night. “Where the revolutionaries at?” he inquired before ripping into a verse ridiculing the government, capitalism and the media. Followed by the hypnotizing “Pineal Gland,” this proved to be the climax of his set and the moment when all of his riddling eccentricities started to make sense. With a small thank you and goodbye after, he concluded his show––or as Soul said, “Don’t trip on your mind.”