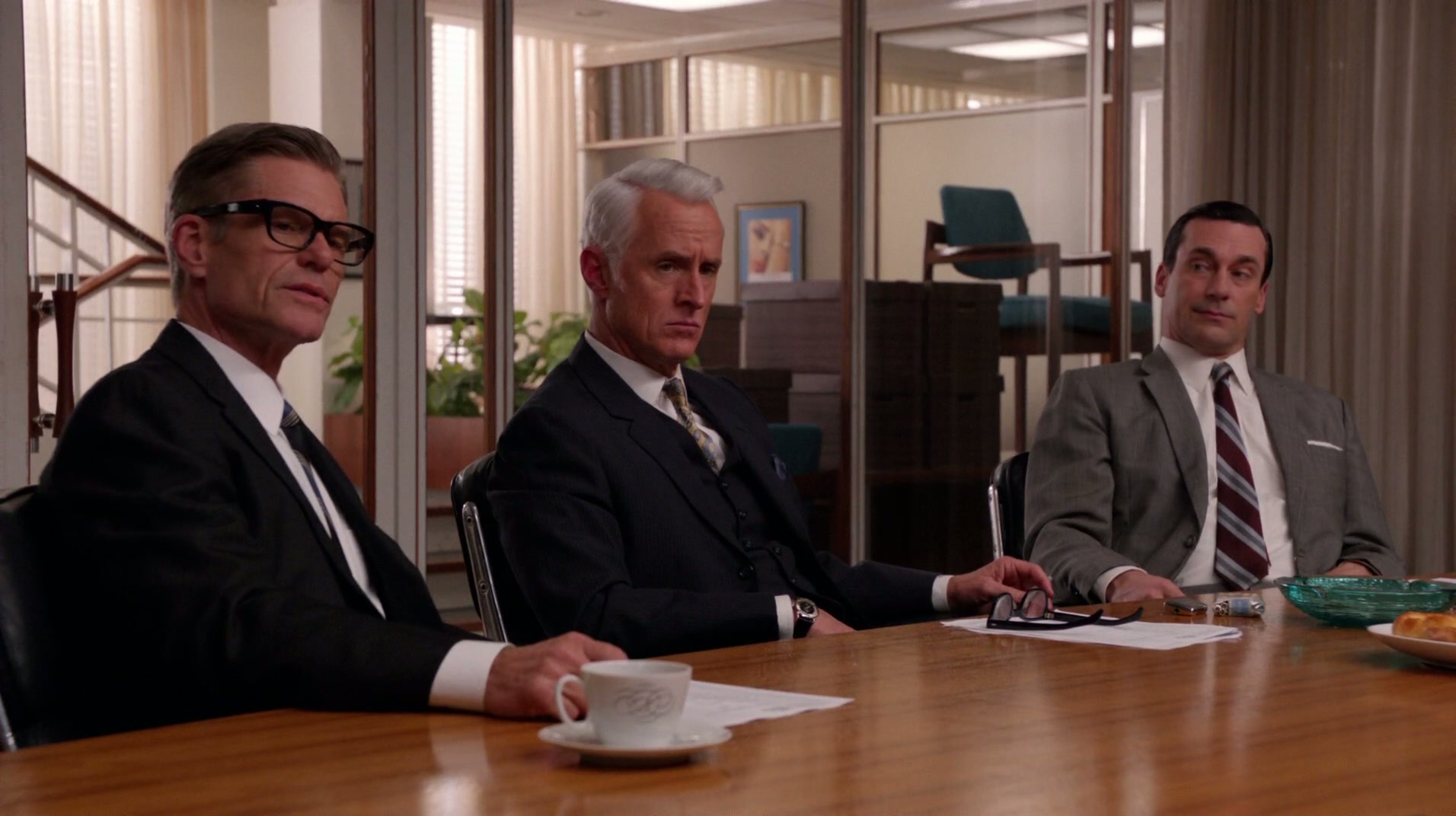 “Mad Men” has always touched on Don’s failure to connect with those around him. This week’s episode emphasizes his disconnect with more than just a few comments and clever dialogue, emitting a survival of the fittest kind of vibe.

When “Man with a Plan” kicks off, we see the employees of SCDP and CGC in the midst of a hectic merger. Many familiar faces are working with their old co-workers once again, including former Sterling-Cooper Director of Accounting Burt Peterson, who mutters early on that Don is “still a cold fish.” He’s right, but he’s also fired again––a decision that Roger Sterling is more than happy about. The confrontation between Sterling and Burt is a thoroughly entertaining spectacle due to Sterling’s characteristic quick wit.

Burt’s layoff is not the only bad news. I mean, it wouldn’t be “Mad Men” if things weren’t always falling to pieces, despite the hopes of all the characters that things will get better. This point is highlighted even further by the news of Robert F. Kennedy’s assassination later in the episode, which stirred the hearts of many when he survived for more than a day before passing away June 6, 1968.

The assassination potentially means many things. Is there an ugly future in store for the newly merged companies? I expect so, but I believe that the choice to include the assassination in the story is to foreshadow Peter Campbell’s impending fate. Pete, who finds himself unable to meet with clients during the merger, is forced to take care of his dementia ridden mother. During this time, Pete’s mother continually compares her son to her late husband, a man who squandered the family fortune before his death and also engaged in some scandalous affairs. Not surprisingly, there are plenty of similarities between Pete and his deceased father.

Believing that his mother is simply overcome by her crippled memory, Pete does not believe her when she says, “They shot that poor Kennedy boy.” Two brothers, similar in nature, were killed while rising in the public eye. Pete knows JKF has passed (along with his father), but he is unwilling to accept Bobby Kennedy’s fate much like he will be unable to accept his own. I suspect Pete’s job will be on the line soon enough and that Don will be the one to try and edge him out of the company. Pete’s inability to get a chair during the partner’s meaning was also more than just a fluke.

As for the rest of the “Mad Men” crew, they’re mostly worried about the plight of the merger––a transition that I assume will end with the cutting of a few major characters. There are a lot of similarities here between many of the people in the show; Jim Cutler and Roger Sterling are oddly alike, and even Ted and Don are shown comparatively throughout the show (I’m sure the mirror-imaged offices was not a coincidence).

Don and Ted engaged in some necessary back and forth throughout the hour. For one, Don competes in a bit of a drinking competition with Ted and is obviously proud that he has a liver of steel. Afterwards, when the hospitalized Frank Gleason asks Ted what Don is like, he remarks, “He’s mysterious. He hardly ever talks, but when he does it’s so eloquent.”

Don made sure to look like the bigger man on campus, but there is a mutual respect building between him and Ted. This is especially true after Ted receives some sound advice from Frank and decides to fly Don to a meeting with Mohawk airlines during a rough storm in his own little plane. Don seems frightened on their way up above the clouds, and doesn’t even bother to enjoy the view like Ted does––perhaps meaning that Ted, in a metaphorical sense, is determined to see clear skies ahead. During the flight, Don does decide that Ted should take the lead on the meeting, which reflects an interesting transference of the dominance that Don held over Ted during their subtle drinking game.

Even with all the captivating drama taking place in the office, the most interesting portions of the show surround Don and Sylvia. Sylvia argues with her husband, Arnie, early on. Soon enough, she phones Don at work and says, “I need you, and nothing else will do.” This triggers Don’s kinks and results in some uncomfortable interactions in a hotel room.

Don and Sylvia do make love, but not until Sylvia repeats those words once again. I guess the word “need” really gets Don going. After their intimacies, Don embodies a demanding character. He wants to dominate. He even tells Sylvia to crawl on her hands and knees to get his shoes, tells her what to wear, when to take it off and leaves her in the hotel room for hours on end. Don seems perfectly okay with his demeaning actions, making the audience feel even more unsettled. Even Sylvia, initially turned on by Don’s domineering, becomes distraught by their interactions, but the two are supposed to seem progressively disconnected.

When Don returns, Sylvia says, “It’s time to really go home. It’s over, and not just this”––meaning that the fantasies Don said to be “satisfying” were all just a game and it’s time to go back to reality without one another. Yet Don doesn’t really have a “home,” and I find his actions in the hotel room with Sylvia to be an unusual attempt to open up and show how emotionally disturbed he actually is. Like Ted says in the plane ride, “Sometimes, when you’re flying, you think you’re right side up, but you’re really upside down.”

Ted’s words become all too apparent as we see Don return home to wife Megan, who rambles about Hawai’i and slowly fades to silence as Dons sits, distracted and looking uneasy. Hopefully Don can get his bearings; otherwise, he will continually become more self-destructive. Who knows? Maybe Don is due for meltdown.