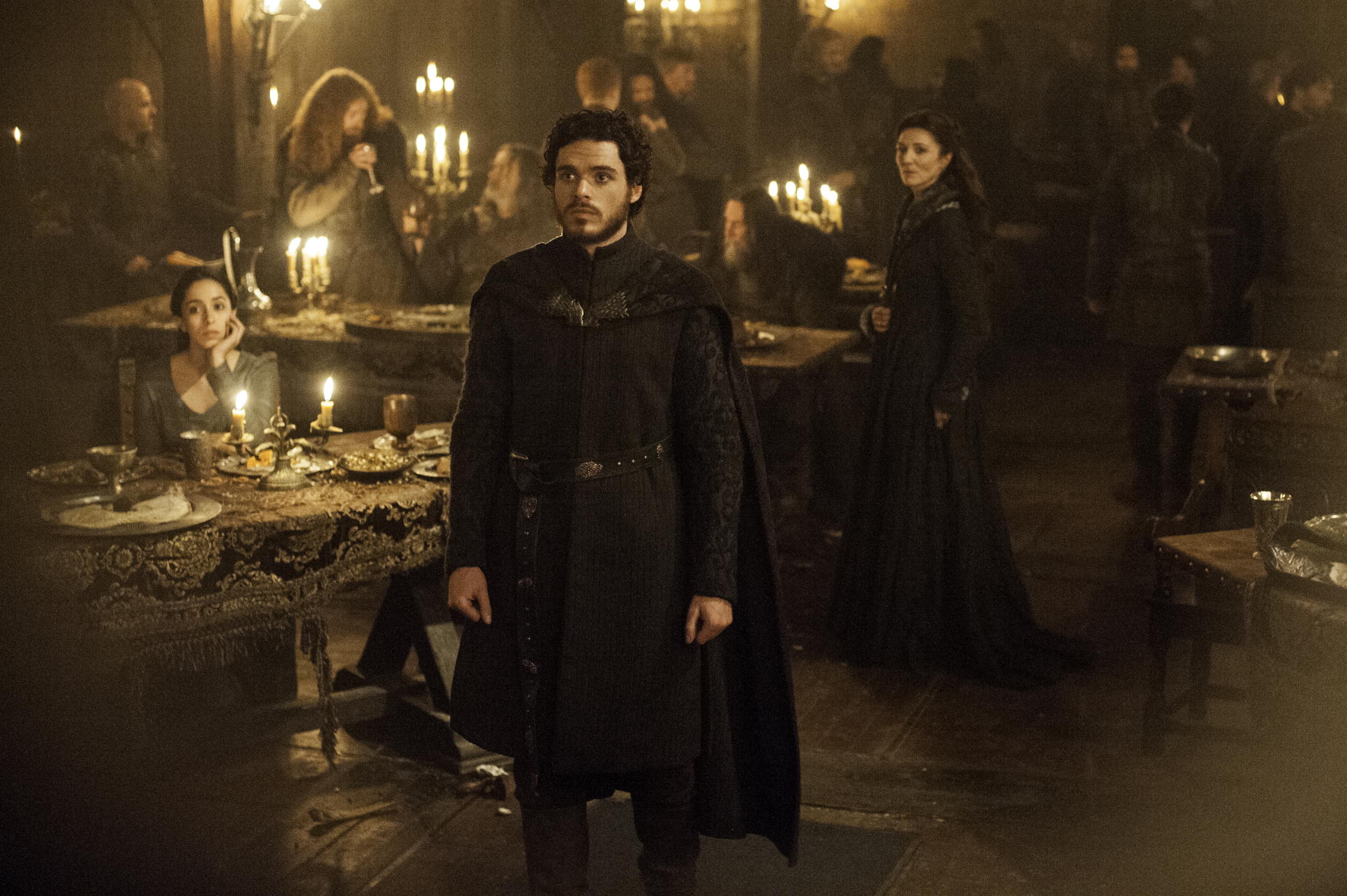 By now, avid watchers already know to fear episode nine of every season. From Ned’s surprise execution to the Battle of the Blackwater and now the Red Wedding, the ninth episode has been the climax and the permanent game-changer of every season.

Before I get carried away with the juicy details (pun intended), “The Red Wedding” has become infamous on every social media platform, spawning its very own Twitter account (@RedWeddingTears), “Operation Weeping and Wailing” on Reddit and clever memes cropping up in every crevice of the Internet. But let’s focus on a bit more on the smaller, but no less important, plot development intertwined into what has got to be one of the biggest shockers in television history.

For once we get a reprieve from King’s Landing and a greater focus on happenings just south of the Wall. Jon was forced to reveal his true colors as a Crow. In a scuffle, he kills Orell the warg, whose spirit lives on in his pet eagle. Lots of other wildlings were killed with the help of Shaggydog and Summer, controlled by Bran as he was finally able to warg at will. Unfortunately, Jon rides away in a rush in all the chaos, leaving behind a thoroughly shocked and livid Ygritte. She made it clear earlier that she would die for him, only to be unceremoniously abandoned.

Right above the commotion, Bran and company were seen in hiding, and in a moment of desperation he wargs into Hodor, a human — and a feat Jojen says no one had ever accomplished. Unable to reunite with their half-brother located only a few yards away, Rickon and Bran will now also have to split up for Rickon’s safety. This is just a tiny taste of the overabundance of bitterness this episode, as there are countless “oh so close” moments that never come to fruition. However, the separation of Bran and Rickon has been a long time coming, and it can only mean that the writers are finally dedicating themselves to Bran’s much-anticipated story arc.

In Essos, Dany once again displays her competence as a ruler when she urged Grey Worm to grow into his role as a leader of the Unsullied. However, we are shown her inexperience in warfare in the same night. She appeared frazzled next to Selmy, who calmly sipped on wine during the sacking of Yunkai. After their victory, a bloodied and broken-hearted Jorah can only look on with boiling despair as he realizes he has been overlooked in favor of the much younger leader of the Second Sons. And who can blame Dany? She’s a teenager, after all, and the chances she can look at Jorah as anything but a trusted protector is impossible at this point.

It’s a victory for Dany in the east, but great loss and tragedy back in Westeros as the North has lost another noble and honorable Stark. “Rains of Castamere” is undoubtedly the episode all book readers have been doggedly looking forward to, and the one non-readers are all furious and fuming over. Some have even sworn off the series completely, declaring their hate for HBO and series author George R. R. Martin all over the Internet. At least the reaction of the fans must mean that the showrunners are doing something right.

Edmure’s wedding is the main piece this week, and no details were spared in building up the foreboding feeling that something just wasn’t sitting well with Lord Walder Frey. The significance of the guest right custom is in the eating of the salt and bread by the Starks and the Freys, which is supposed to signify that no harm will come to the guests under the roof of their hosts, even if they’re enemies. Why is this important? Because the Freys will not only become the most hated house in the world of the audiences, but also in the Seven Kingdoms for their betrayal of one of their most ancient and sacred traditions. In Martin’s world, a man is only as good as his word, and Lord Frey’s treachery ensured that no one will ever trust his House again — effectively condemning his family name to become synonymous with traitors and liars.

Right before the slaughter, we are treated to some heartwarming scenes between Robb and Talisa discussing the future of their unborn child. It would appear their love is finally earning the approval of Catelyn. The wedding served as a bridge between the Stark matriarch and her eldest son, as we see when Robb asks her for strategic advice — something he hasn’t done since season two — as a olive branch that symbolizes his forgiveness for her previous treason. With this wedding, the mother and son can put the mess behind them and mend their strained relationship.

This made their massacre all the more agonizing to sit through. As a book reader, I thought I knew what to expect, but nothing could have prepared me for the horrendously brutal stabbing of Talisa, the first victim of the night. Robb’s supposedly pregnant queen survived in the books, but to end his line so abruptly and mercilessly on the show truly puts an end to Robb’s storyline and dashes the hopes of fans that the King in the North may have a male heir.

The whole sequence was well constructed, that’s for sure. For many book readers, how the writers and producers handled the Red Wedding was going to be a defining moment for the show, and they didn’t disappoint. The crew put depth and understanding in creating what would make something as emotional as the deaths of two of the most pivotal characters. They played up the mother and son relationship, and focused on Catelyn’s loss of her husband and all her children — except for her daughters, and for all she knows, they wouldn’t have much longer to live after her and Robb’s death. This is the woman who once held a loving family together, only to watch as they were taken from her one by one through violent means. The burning sensation in the back of my throat was heightened by the fact that she died not knowing Arya was a mere few steps away, and that Bran and Rickon are alive and fending for themselves.

In a move that is simultaneously uncharacteristic and befitting, Catelyn kills Lady Frey. As an honorable Tully, and as a mother and wife, Catelyn has always urged peace and justice, yet in her final moments, we see just how far she has been pushed as she herself adds to the show’s senseless violence. She seemed to be in a trance as she slit the throat of Lady Frey, and the broken and lost look in her gaze as she stares, frozen with disbelief and grief before she herself is killed has been described by one viewer as “what it looks like when the soul dies, but the body is alive.” That’s definitely an image that’s going to haunt viewers for seasons and seasons to come.

Lord Walder Frey relished in the bloodbath as he gleefully watched Robb hold his dead queen in his arms. Robb’s final word — “Mother” — and the look he gave Catelyn as he stared into his mother’s eyes was a quiet acceptance of defeat and recognition of how much his mistakes have cost them. There was no fight left in the Young Wolf, even as traitor Roose Bolton delivered the final blow with, “The Lannisters send their regards.”

Arya was right outside the massacre, and having witnessed Grey Wind being put down must have been enough clue that her brother and mother weren’t far behind. This was perhaps the most heart-wrenching “so close yet so far” scenario to date. Her family was within literal reach when it was all taken away from her. I would fully expect Arya to be a changed girl with more burning hatred in her than all the people in Westeros combined.

The Starks are the latest family to relive the “Rains of Castamere” nightmare, and the Lannisters effectively put out their most formidable opponent without having to meet on the battlefield or suffer a single casualty on their side. The Boltons and Freys did the dirty work while Tywin orchestrated the event with nothing more than — you guessed it — a quill and some papers.

I’m sorry to see Michelle Fairley and Richard Madden depart from the show, but they’ve truly outdone themselves with their characters. Their final scene was played with so much heart, feeling and believable anguish that I wouldn’t have wanted it to end any other way. Madden as the conflicted, young king struggling to live up to his father’s reputation was paired immaculately with with Fairley’s dutiful, honorable and kind Catelyn, who is caught between doing what is right and what her heart desires for her family. The two went out with a bang, and raised the bar for future actors who wish to become part of such an impeccable cast.

The face of “Game of Thrones” has been changed forever, and there’s no going back. As Theon’s torturer famously said, “There is no happy ending.” No one is safe is Martin’s world, and I admire his courage to go where fantasy fiction hasn’t gone before: killing off heroes, vanquishing happiness and being wildly, frustratingly unpredictable.