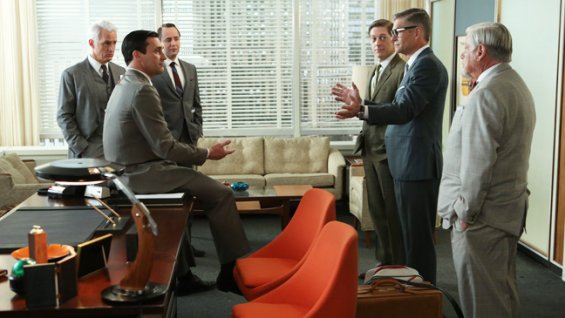 It’s appropriate to begin this week’s review with the famous line, “It was the best of times, it was the worst of times,” not only as an excuse to insert an ode to Dickens, but because of the title of the most recent episode of “Mad Men.”

The partners of Sterling Cooper and Partners (a name has finally been set in stone) all embark on their own journeys across the country this week. This does not come without its ups and downs, which of course are expected, seeing as the title for the episode is hardly subtle. Ted is off to Detroit to speak with Chevy, while Don and Sterling spend some time in LA and the rest are stuck in New York to play the “world’s most expensive babysitter[s],” as Jim Cutler put it.

Ted is barely seen and it is a shame we do not get to see him coax over Chevy and finally convince them to accept SC & P’s ideas for their advertising campaign. However, we do get some good moments with Ted, but his scenes are nothing more than just plain good across the board. Until Kevin Rahm’s character is written a really significant arc, I expect the same work for the last three episodes. Ted has become the expected mediating body and nothing more.

Ted does get involved in one squabble, but this is because Joan has decided to pursue her own client. Joan believes a friend is setting her up on a date and is unaware that the head of marketing at Avon is really looking for a new set of eyes to look over their failing ad campaigns. After pushing Pete out of the loop, Ted has much to scold her about. Lucky for Joan, Peggy saves the day. Both the girls are good here. Joan earns another sympathy vote seeing that she once again gets the short end of the stick. As Peggy, Elisabeth Moss has become such an integral part of the show and is so entertaining to watch as her character receives applause for her strong female role.

Aside from the whole debacle that arises between Joan and a few of the other partners, Cutler is apparently looking to sabotage the business. He doesn’t even bother to hide his intentions and fully admits to wanting to fire a large portion of the crew that came with Don. Fans have yet to know what exactly Cutler is planning on doing, but we do know that he has it out for Ginsberg after a heated confrontation about the evils of business corporations. Either way, Cutler removes himself from the picture and lets Bob Benson, of all people, handle the clientele while the others are away on vacation.

James Wolk grabs my attention more and more as the season progresses. He is a once-hardcore brownnoser and is now dolling out inspiring speeches and working his way up. I respect him for his determination, and his campy attitude doesn’t hesitate to make me giggle. After Ginsberg says, “Tell me the truth. Are you a homo?” Benson replies, “Now there’s that sense of humor!”

All these events may be compelling, but audiences know that all eyes are really on Don. I suspect there may be some truth in a saying about ladies loving a man of mystery, so I guess it’s no wonder that Don has one too many opportunities for infidelity. But, I don’t want to steer the reader in the wrong direction because he hardly commits the act, despite the sexy makeout session he has at a party in the hills of Los Angeles — snazzy.

Before we get to that, I should back up a little. Don and Roger, accompanied by the usually waved-aside Harry Crane, are on the hunt for Carnation’s business — a company that produces cereals and powdered beverages, among other things. Roger is naturally excited, exclaiming on that plane that his and Don’s “biggest challenge is to not get syphilis.” Oh, you strike my funny bone every time, Roger. Unbeknownst to them, California is not quite the party they assume it will be.

SPOILER ALERT: Harry is all about business, running around looking for big movie producers and so forth in order to expand the company’s advertising reputation. But to hell with business — Roger is more concerned about whom he is going home with, and Don has been so far gone in his own world for so long that he doesn’t even care if he ends up face down in a ditch somewhere. Well, I shouldn’t say “ditch,” since he actually winds up face down in the pool on the verge of death.

Before Don apparently blacks out and wakes up to Roger resuscitating him, Don smokes a bit too much of the reefer and finds himself in the midst of one those familiar “Mad Men” trips. This time around, Don has a long talk with his wife and a soldier with an arm missing. The strange thing about Don’s trip is that he seems so happy and gleeful up until the point when the soldier says, “Dying doesn’t make you whole, you should see what you look like.” Don appears to be more comfortable in death than he ever really is in life.

The entirety of the episode jumped back and forth between the fun and exciting to the dreadful and depressing. Joan has potential to earn respect, but is scolded for it. Don and Roger party in Los Angeles where the babes are hot and everyone is laid-back, but cannot have a good time and even have an uncomfortable interaction with heads of Carnation (for the short time they actually did sit down together). The company is growing, but Cutler just cannot seem to feel safe in the environment. Weiner and Leahy, who wrote this newest installment, did not place in shots of antiwar protests for nothing. I expect that teetering back and forth between the good and the bad is meant to keep audiences on edge for the big cliffhanger to come in the final episode. We’ll just have to anxiously sit on the edge of our seats for the next three episodes and find out what exactly that will be.