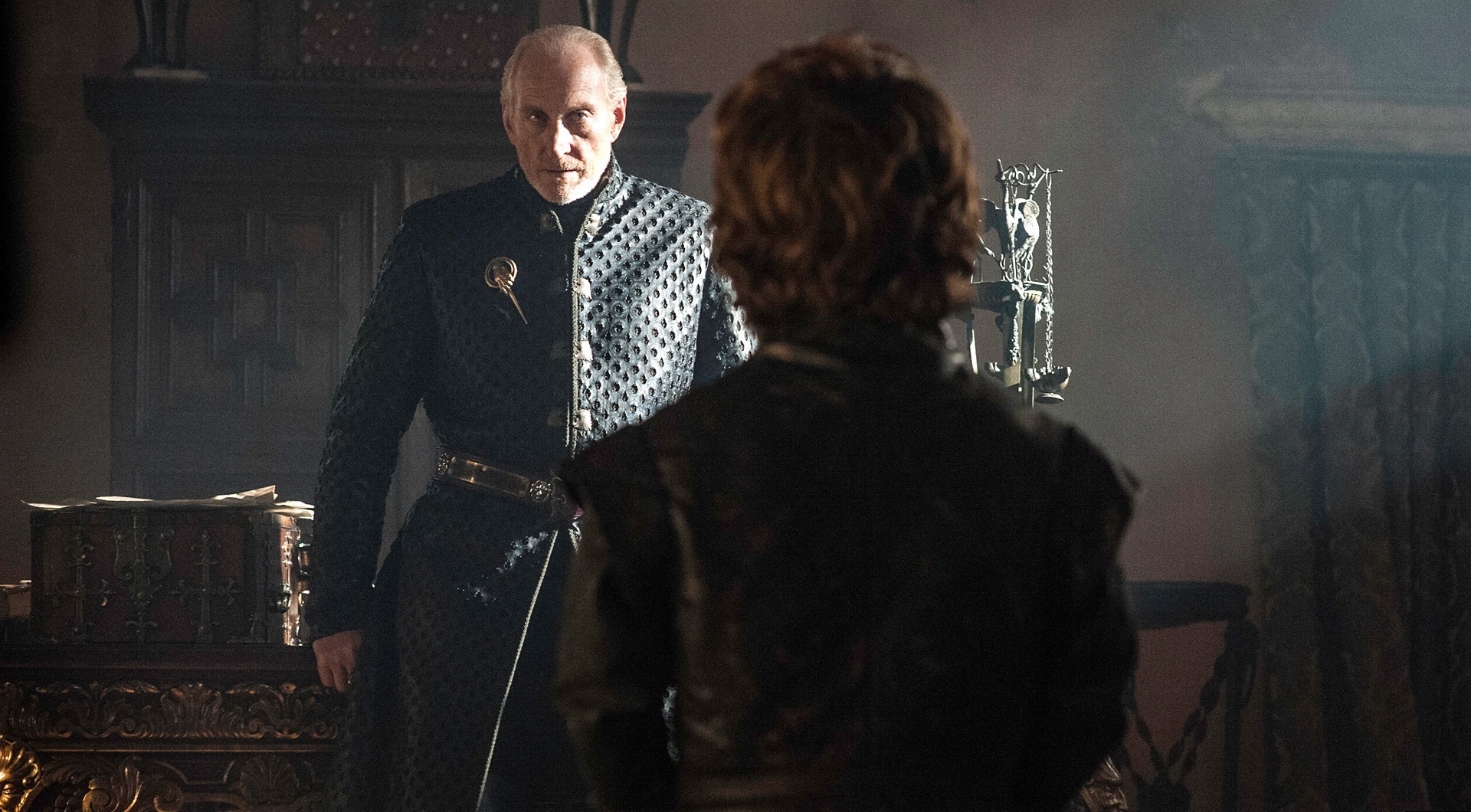 To be honest, I didn’t know what to expect after last week’s massacre. Being a reader of the books, I thought I had an idea, but the showrunners have long proved they are just as capable as author George R. R. Martin of pulling the rug out from under fans. “Mhysa” not only served as the grand finale to the strongest season by far, but it also felt less of an end episode and more of a bridge. Instead of winding things down, it upped the intensity and suspense by about a billion.

More potential risks and plot developments are introduced, though not without some drawbacks.

We open the episode with a continuation of the Red Wedding, showing the whole Stark army getting brutally slaughtered. Poor Arya awakens to see her brother being mocked and paraded around with Grey Wind’s head attached to his body. This week also solidified Roose Bolton as a stone cold badass, right to the core. After being nothing more than a background character, the newly minted Warden of the North is sizing up to be quite a formidable foe, most closely resembling the calculating and ruthless Tywin Lannister, except a few degrees more menacing. Just look at his conversation with Walder Frey — the man knows how to pick his words, and his expressions are nothing short of bone-chilling.

It is also revealed that Theon’s tormenter is none other than his bastard son Ramsay Snow (that sausage-eating scene was gag-inducing). Roose is aware of Ramsay’s madness, and is rather nonchalant about it. Back on the Iron Islands, the Greyjoys receive Theon’s “favorite toy” in a box. Balon Greyjoy is perfectly fine neglecting his now-useless son, but Yara is adamant on bringing her little brother home and assembles the fastest fleet with the best killers to retrieve him. After being missing for a whole season, the return of Yara is one that delighted me. A strong, decisive female character who can get away with disobeying her dull-witted father? Sign me up.

Bran’s story has been lackluster forever, and things are barely getting interesting in the final episode. The company runs into Sam and Gilly, and they receive useful gifts of dragonglass from Sam as he bids them farewell. The shot of Hodor, Bran and the Reed siblings walking through the Black Gate into a snowy field lit with silver moonlight was a beautiful scene to mirror the haunting world Bran finds himself in as time goes on. On a disappointing note, because Sam apparently knows the location of the Black Gate (the passage that lets people through the Wall without having to climb it), the show for now has omitted Coldhands, a pivotal character that fans have been dying to see introduced. Bran also fills the audience in on the significance of the guestright that was ignored last episode by telling the tale of the Rat Cook, who was punished for killing a guest under his roof. It’s ominous and eerie and just what viewers wanted to hear — that the Freys aren’t going to go unpunished for one of the worst crimes committed in Westeros history.

One of the more fabricated dramatic scenes is the confrontation between Ygritte and Jon Snow. Heartbroken and betrayed, Ygritte holds Jon at arrow-point, only to have the Stark bastard confess his love for her but also admit in the same breath that he “must go home now” to complete his original duties. This prompts the fiery and teary-eyed redhead to riddle him with arrows, effectively ending the honeymoon phase of their relationship.

Speaking of betrayals, Shae is left feeling screwed over once again by a well-intentioned Varys. The eunuch wanted to send Shae away without Tyrion’s knowledge, but Shae is under the impression that Tyrion was the one to use Varys as a messenger. This can only brew more trouble in their already strained relationship.

After being absent for a week, we get to see the fire and drunken humor re-emerge in my favorite Lannister, Tyrion. He grows protective of his young bride, and makes not-so-subtle insults to Joffrey when he cruelly demands that Robb’s head be served to Sansa at his wedding feast. Even Cersei and Tywin react with disgust and for once, Tywin steps in, only to have his own grandson diss him in front of the small council. This ends up being a bad move, and even Joffrey realizes his mistake. In one of my favorite scenes of “Mhysa,” Tywin coldly sends the king to bed literally without his supper, showing his grandson a crown isn’t needed to rule a kingdom. We then get another great interaction between the Lannister patriarch and his youngest son, reminiscent of their encounter in the season’s opener. Tywin is no less harsh, and spits out that the only reason Tyrion is alive is because he’s a Lannister, which I take as a backhanded insult to Tyrion.

Later, Tyrion has some quality time with Cersei, who reveals that without her children, even Joffrey, she would have killed herself a long time ago. Touching, I suppose, but really the two Lannister children have no choice but to rely on each other. Every time they deal with an enemy, they “create two more.” This is a nice allusion because while Tywin takes it that “the North remembers” means the northerners have learned their lesson, the more astute Tyrion fears that the northerners are going to come back with a vengeance. The Lannisters may have more money and power, but it is the North that has stronger loyalties. In the end, loyalty lasts much longer than gold and is less fleeting than power.

My favorite scene belongs to Arya, whose spunky personality already has legions of viewers rooting for her. I finally see the transition in her that I knew would come, and she seems to have re-prioritized her hit list, having had the perfect opportunity to kill the Hound but choosing not to. Instead, in a deliciously devious move, she innocently approaches a group of Frey men who are insulting her deceased mother and describing in disturbing detail how they got Grey Wind’s head onto her brother. She tricks one of them with the iron coin Jaqen H’ghar had given her before graphically and repeatedly stabbing one of the men in the neck. You bet I re-watched that scene multiple times, and how could I not? Even though it never happened in the books, I loved the foreshadowing in that scene, as she picks up the iron coin with shaky, bloodied hands, saying “Valar Morghulis.” Her duo with the Hound is my second-favorite after Jamie and Brienne, and the two appear to have come to some sort of truce, with the Hound warning Arya to at least let him know next time if she plans on murdering people. I actually said, “Awww.”

The season finale also sets Stannis on the right path. With Davos and Melisandre serving as the angel and devil sitting on his shoulder, the three can at least come to one conclusion: they need to head north in order to win the war. Perhaps to atone for the death of his son, Davos mercifully lets a marked-for-sacrifice Gendry escape, earning the wrath of Stannis. Surprisingly, Melisandre warns that the Onion Knight has a bigger role to play in his upcoming campaign at the Wall. Davos reminds me of Ned in that both would rather die than do the wrong thing, which is all the more reason I’m rooting for his survival.

Every season finale has ended with Dany, and “Mhysa” is no different. The title of the episode means “mother” in low Valyrian, and it’s definitely fitting, as the newly freed slaves from Yunkai pour out of its gates to greet their liberator. Every season finale has been a huge turning point for Daenerys. In season one, she hatched three dragon eggs. Last season, she defied the warlocks and took down the House of the Undying. However, in this finale, the showrunners decided to go with a horribly choreographed scene that depicts Dany as a white-savior-amongst-the-brown-people. They cry out “myhsa” over and over again, reaching out to her as she is lifted above them. I mean, why? We get it, the khaleesi now has an army and people to back her up, but was it really necessary to have her be put on such a high pedestal? Without giving too much away, I really hope the writers will portray her the way she’s meant to be portrayed — an adolescent ruler who doesn’t always get her way, makes mistakes and isn’t exactly capable of being the perfect queen. There is no doubt that Daenerys is a fighter and a survivor, but as Martin has shown us, even the best characters can make grave missteps.

“Mhysa” is a bittersweet ending to a phenomenal season. After the gruesome deaths of some beloved characters, maybe it’s a good thing we get a break to recover, but the finale certainly won’t let the viewers rest as it instead creates more conflicts and sorrow. More questions and uncertainties are posed, but instead of feeling frustrated, I was satisfied with the way the writers are letting audiences know they have quite a hefty fourth season in store for us. Next year will be the last half of the fan-favorite “A Storm of Swords,” so we can all rest easy knowing that the show won’t be losing its steam anytime soon.