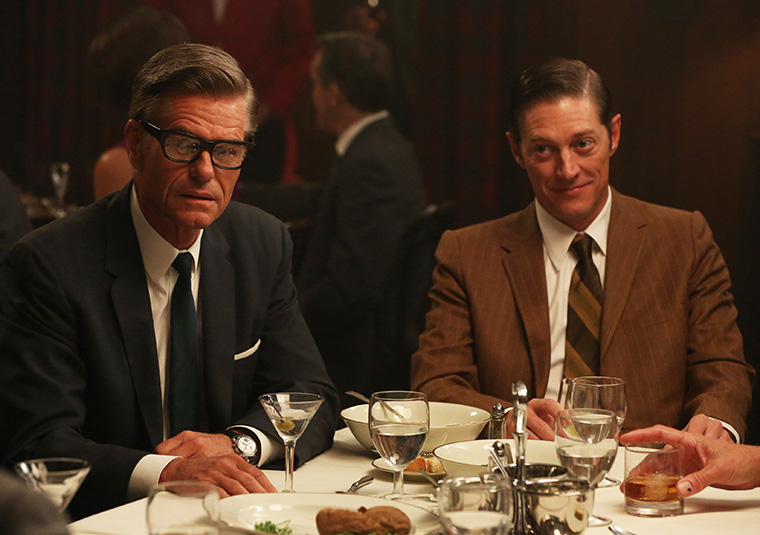 The eleventh episode of “Mad Men” is quite the nail-biter. As if Don’s emotional and mental well-being were not already at painstakingly high levels, the amp has definitely been pushed past 10. But we’ll get to that.

I would first like to note some other highlights from the episode before delving into the train wreck that is Don Draper’s life. First, Roger Sterling is exceptionally hilarious. The first conversation we see between him and Don is testament to the comfort their relationship has developed over the last few years. I also got a kick out of seeing Roger juggle.

Bob Benson is notable not just because of the surprisingly increased focus on him, but because of a compelling character arc that emerges during an interaction with Pete Campbell. Spoiler alert: Bob Benson is homosexual — at least that is what’s implied from the intimate looks and subtle come-ons that Pete predictably rejects. You should be flattered, Campbell! That hair loss is going to affect your game with the ladies and we know Trudy isn’t taking you back anytime soon.

Speaking of Pete, it was nice to see him and Peggy reconnect on a level that has not been seen since Pete confessed his love for Peggy in season two. I loved the joking around and the moments of tenderness that were lost after their relationship crumbled. There was also the added bonus of watching Ted’s curiosities spike when returning to the conversation after a bathroom break. It is clear that Ted still harbors feelings for the confident copywriter.

Aside from his romantic quarrels, Ted has a profound effect on the events in Don’s life. After almost sabotaging a much-needed business meeting with the Chevy Corporation, Don confesses to Ted that Sylvia’s son is missing in action (MIA). Apparently, Don truly wants to help Sylvia and her son out. I gawked at the idea of a self-righteous Don Draper since he is usually only concerned about his own little world.

Luckily for Don, Ted has connections in the military and Sylvia’s son will dodge serious repercussions. This was a foreseeable outcome, but was only a minor pitfall since the real interest lies with the effect it has on Don. Sylvia is so overcome with gratitude that she just can’t resist sleeping with Don again. This ignites a whole other set of problems for Don since his daughter, Sally, is led to Sylvia’s apartment by other circumstances and witnesses the two in the throes of passion. I almost gasped at the sight of Sally’s discovery.

Don was already having a hard time trying to be dad of the year, and this certainly will not help. But the ending exchange between the two was very well-done as the two connect on an emotionally personal level that has never been reached before. One can tell that Kiernan Shipka’s acting has bumped up a notch. I look forward to seeing more of her as the show continues.

Damn, Don. Why can you not resist yourself? Not to say I mind — watching Don struggle is my guilty pleasure and it sure does make for grade A television. I just hope for a silver lining within “Mad Men,” but I guess I should know better. The dying rat in Peggy’s apartment halfway through must be a metaphor for something, as Weiner is known for inserting some typically gloomy symbols from time to time. Perhaps the new conflict of interest (Don is working with Sunkist, and Ted with Oceanspray) will be the only serious issue as we step closer to the finale.

Ah, who am I kidding? The last two episodes are going to be a disaster for the employees of SC & P.