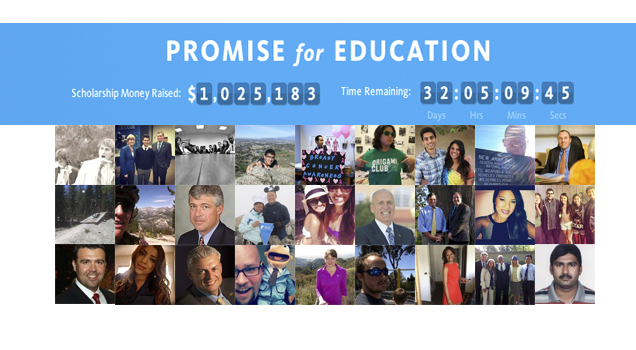 On Sept. 15, the University of California (UC) started “Promise for Education,” a crowdfunding campaign that calls for public donations aimed toward supporting scholarships for higher education. Geared toward a younger generation, the campaign intends to attract additional external funds through promises made by the UC community.

“As stewards of one of the world’s premier public university systems, we have a duty to make an excellent education accessible to all eligible Californians,” said Daniel M. Dooley, UC systemwide senior vice president for external relations. “Now it’s time for your promise.”

Nearly a billion dollars of state funding have been cut from the UC system over the past five years. At the same time, the UC provided more than $1.5 billion in grants and scholarships as of last year. Despite that fact, students still pay more out-of-pocket than state funding can provide to them.

The campaign’s creative method of fundraising allows each individual to fulfill his or her personal pledge, which ranges from going vegetarian for a year to giving up junk food for a week, in order to reach a designated financial goal by Oct. 31 — the deadline of the campaign.

UCR Chancellor Kim Wilcox promises to host a pancake breakfast at the Highlander Union Building. Kathy Barton, the executive director of strategic initiatives at the UCR School of Medicine, promises to commute to work by bicycle at least a dozen days until the end of October.

“As an undergraduate, I was supported by scholarships and still recall how important that was to me,” said Barton. “So helping raise scholarship funds for current and future students is a particularly rewarding way to give back. Moreover, this will motivate me to resume the healthy habit of part-time bicycle commuting that I gave up many years ago.”

ASUCR President Sai Patadia and Vice President of Internal Affairs Johnny Ta also promised to shave their heads during a Wednesday Nooner at the Bell Tower if they reach their fundraising goal of $4,000 dollars.

“I chose to be a part of this campaign so I can help students like myself. I came from a single parent low-income family and I wouldn’t be able to come to UCR without grants and scholarship. I believe that education is the way out. Help me; help students to find their way out,” said Ta in a video release.

Patadia added that by allocating funds through this campaign, he hopes to help alleviate the struggle of obtaining an education in the UC system.

“I have heard way too many students giving up on going to college because of the financial burden,” said Patadia.

The campaign has garnered much attention, even from prominent figures such as Gov. Jerry Brown, Jamie Foxx, David Spade, Matt Barnes, Wilmer Valderrama, filmmaker Catherine Hardwicke and rapper George Watsky. So far, more than 4,000 people have made their promises and more than one million dollars have been donated.

Numerous sponsors including Facebook, Bank of America, Spotify and Muzik — the creators of the SmartHeadPhone — are also supporting Promise for Education.

“We are excited that Facebook can play a role in supporting an innovative program like Promise for Education,” said Libby Leffler, strategic partner manager of Facebook. “Millions of college students and alumni use Facebook every day. We’re thrilled that our platform provides the opportunity for supporters of Promise for Education to share their passion and commitment to the University of California.”