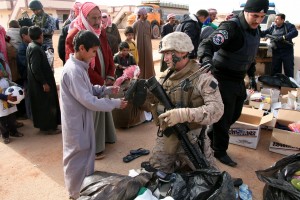 During an 1879 speech to the Michigan Military Academy, General William Tecumseh Sherman reminded the class of fresh-faced students that “war is hell.”

He was in a unique place to know. Sherman had just helped lead the Union to a blood-stained victory in the Civil War, a five-year conflagration that resulted in more casualties than all other wars in United States history combined. Over 750,000 people were dead. The South’s economy had collapsed. Over $6.7 billion were spent. Hundreds of acres of fertile land was razed. These were the casualties of conflict.

Our policymakers would do well to remember the consequences of war before they decide to jump headlong into the newest conflict in Syria. When reports surfaced that forces loyal to Syrian President Bashar al-Assad had used chemical weapons on their own people, a cry of outrage was raised across the world. People everywhere agreed that something must be done.

And indeed, something must be done. But the world, and the United States especially, should not jump to armed intervention.

It is true that Assad and the actions undertaken by his dictatorial regime are morally reprehensible. But that alone is not enough to warrant a potentially destabilizing intervention in a country torn by civil war. Imagine if the United Kingdom had come to the aid of the Confederacy during the Civil War (a proposition considered seriously by the government across the pond). The Union would have been incensed — and rightfully so. It is not the role of countries to intervene in the matters of a sovereign state.

More practically, United States intervention does not have a great track record. The Iraq War only resulted in frequent electricity outages, a stubborn military insurgency adding to the lives lost, and one of the most corrupt governments in the world. There is ongoing strife in Libya and the number of U.S. troops killed in Afghanistan continues to rise. The legacy of intervention still lingers in Iran with a hostile government and in Somalia with a dysfunctional one. These lessons reveal that military intervention should be approached warily. Political instability is not a situation extraordinary enough to warrant such intervention.

The crisis in Syria is the humanitarian one, the steadily accumulating pile of bodies that now are estimated at 1,400 killed. The United States can, and should, do more to provide aid to the innocent victims of a bloody conflict. Medical and financial aid can be provided to Syrian refugees escaping from the warzone. The United States can encourage its allies in the region to keep their doors open to Syrians risking their lives to achieve a modicum of safety.

The single greatest thing that can be done to prevent more innocent deaths is to stop Assad’s use of chemical weapons — and this is precisely what is happening right now. In a framework supported by countries around the world, Assad has agreed to provide the United Nations with a comprehensive list of the government’s stockpile of chemical weapons and turn them over for destruction.

Although the UN has proven itself ineffective on many occasions, this time the system worked. Syria has already met the first international deadline, and looks poised to continue under the watchful eyes of the global community. In the short span of a couple weeks, Syria has admitted to having chemical weapons, agreed to give them up, applied to join the worldwide ban on chemical weapons, and begun the process of turning them over — all without the U.S. firing a shot.

Assad and his actions must still be carefully scrutinized, of course. And in the event that Syria does not abide by the terms of its agreement with the UN, the threat of military force must remain on the table. But if anything, the past few weeks show that peaceful means of eliminating chemical weapons, alleviating humanitarian crises and upholding international norms is possible without resorting to violence.

The world is much different from that of General Sherman’s. We now have chemical weapons that can wipe out swaths of people with plumes of deadly gas. We can pilot drones to strike people on the battlefield from thousands of miles away. We have nuclear weapons that can wipe out the world in the blink of an eye. We have the capacity to inflict so much more pain on the people of the world than we could 150 years ago.

But we also have access to institutions, like the United Nations and the global chemical weapons ban, that can help prevent the hells of war and keep the peace. And when we have the chance to save lives and prevent destruction, we should seize that opportunity.