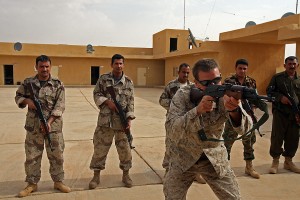 People agree that violence usually doesn’t solve a problem. But what happens when talk is not enough to solve it? In some situations, a threat of force is necessary to arrive at a conclusion. This is the way the United States government has responded to the actions Syrian President Bashar al-Assad has engaged in.

Americans complain about the violence that may arise if the U.S. intervenes, but how can the government turn the other cheek to a government that is killing innocent civilians and taking lives of harmless children? Americans opposed to the U.S. interfering with Syria are tired of their country engaging in matters they think don’t concern it. They are tired of having to send their beloved soldiers into situations where their lives are put at risk. But these brave soldiers are the people who protect and help keep people safe.

Reports claim that 1,429 people died in Damascus due to the Aug. 21 chemical attack. Of those, 426 of them were children. The attack has been described as an “inconceivable horror.” People who were affected by the chemical attacks in Damascus are still suffering from chemical poisoning. “Respiratory problems, nausea, weakness and blurred vision” are some of the symptoms survivors are experiencing a month after the attacks.

It is evident the U.S. has a difficult decision. Former President George W. Bush admitted this, claiming that President Barack Obama has a “tough choice to make.” While there are various factors to take into account when deciding whether or not to attack Syria, it is important to consider the innocent lives at risk at the hands of Assad. The U.S. is standing up for the people under siege.

It is a good plan to interfere with the ongoing conflict in Syria if it does not comply with the treaty. Besides violating the “international norms against the use of chemical weapons,” as President Obama has said, the possession of these weapons is dangerous. This conflict is a potential threat to the U.S., as well as its allies, like Israel, Jordan and Turkey. Not doing anything to address this problem would be trusting that Syria will not use chemical weapons against their people as well as other countries.

Syria cannot be trusted with such power when its government has flatly denied they were responsible for the use of the chemical weapons that ended thousands of lives. Since it was discovered that the Syrian government used these weapons, it has become evident that the Syrian government is not afraid to use these chemicals against their people and will not think twice about using them in defending itself from any aggression.

Scholar Aaron Miller compares the situation in Syria with occurrences in Libya. People have become concerned with the U.S. government making the same mistake that was made in Libya when Libyan rebels proved to be “ungovernable” by stealing U.S. weapons. But ultimately, as President Obama has said, Syria is not Libya. Every problem is different and therefore each needs different solutions. Syria should not be ignored because of the issue in Libya. It is unjust to disregard the innocent Syrian people due to a problem that has nothing to do with them.

It is reasonable to use a threat of force if Syria does comply with the terms that have been established by the U.S. and Russia. It is important to hold countries up to this standard in order to get them to cooperate. Applying this notion to a larger-scale problem is the right strategy. If it takes a threat of force to keep the U.S. safe then it must be brought to the table. The president should take measures to keep his people safe and save the lives of Syrian people who could be at risk of another chemical attack.