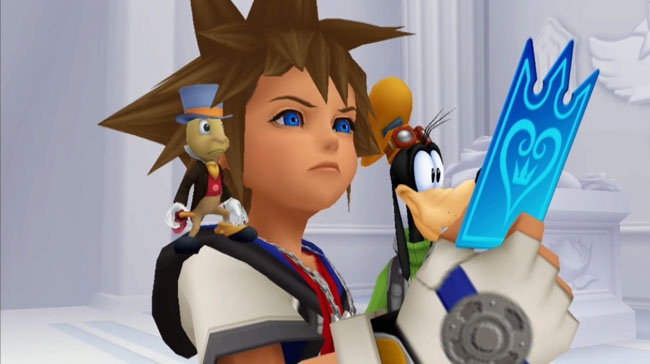 Technically, “Kingdom Hearts HD 1.5 ReMIX” does not provide anything new to fans as it is a remastering of the originals –– but it does offer advanced graphics, and introduces the Japanese exclusive “Final Mix” version of the original game to North America. The game remasters “Kingdom Hearts,” the 2002 title that brought Disney and Final Fantasy characters together. “ReMIX” also includes the Playstation 2 remade version of “Chain of Memories,” and a high definition remaster of cutscenes from the Nintendo DS game “358/2 Days.”

The story follows the protagonist Sora as he dons the keyblade, a mysterious weapon that chooses a great hero as its owner. With Donald and Goofy at his side, he embarks on a journey where he must find his friends and restore order to each world. The HD-remastered version features different controls and cutscenes — a huge plus to new and old fans of the series. The new controls offer much-needed convenience following complaints from the original game, where triggers were awkwardly located on top of the controller, as well as some other annoyances. Now, the camera is controlled by the familiar right analog stick.

In addition, there are new optional bosses, weapons, mini-games, abilities and enemies. Most of the added content can be bypassed, so it may make a big difference to those who explore the worlds, or very little difference to those who follow the story’s linear narrative. However you decide to play, the added content makes the game much more enjoyable than the original.

“Chain of Memories” boasts high definition graphics, but does not offer anything particularly new. The game bridges the gap between the first and second titles in the “Kingdom Hearts” series from Sora’s perspective. He begins another journey where he enters Castle Oblivion with Donald and Goofy. They lose their memories due to the special nature of the mysterious castle and relive some of the occurrences of the first game, with key differences that lend “Chain of Memories” its own storyline. The graphics look great in this version; they are crisp, sharp and updated to bring this 2008 game to par with modern gaming standards.

The most impressive graphical update was bringing “358/2 Days” into 1080p HD graphics. Though it is not a playable game, Square Enix compiled the cutscenes into a cinematic presentation. The story takes you through another perspective of the series, presenting the lives of the so-called villains of “Kingdom Hearts II,” Organization XIII. The organization is comprised of literally heartless, empty-shelled beings called the Nobodies. Under the direction of Xemnas, the members go on missions to accomplish an initially unknown goal.

The story then leads to a tale of friendships in the oddest places. The bond between the main character Roxas and his friend in Organization XIII, Axel, becomes stronger as another Organization member, Xion, is introduced. The trio become extremely close friends, but the happy tale soon takes a heart-wrenching turn — one that proves the worth of this small-scale DS game by possibly having one of the best stories in the history of the series.

The HD graphics look great, but there are obvious issues that are apparent in the conversion process from the DS to 1080p. The graphics are almost up to par with the other games in this remaster collection, but the one problem with the cutscenes is the dark shadow around the characters that is only apparent in “358/2 Days.” This may have been the tradeoff for updating the graphics. Other than that, the cutscenes look great and the story is still hauntingly beautiful. In a sense, this compilation was a motion picture book. It worked quite well, but those who know the story might skip those story text moments, which could be perceived as an annoyance. However, those who are new to the series will appreciate having the text to bridge the gap between gameplay.

Overall, this is a great HD remaster collection that provides many new additions to the currently available games, even if it is only through graphical advances and some minor differences in the first game of the series. This game is good for old and new fans alike, and we’ll be waiting for the next remaster collection that is hopefully treated with the same standards as this release.