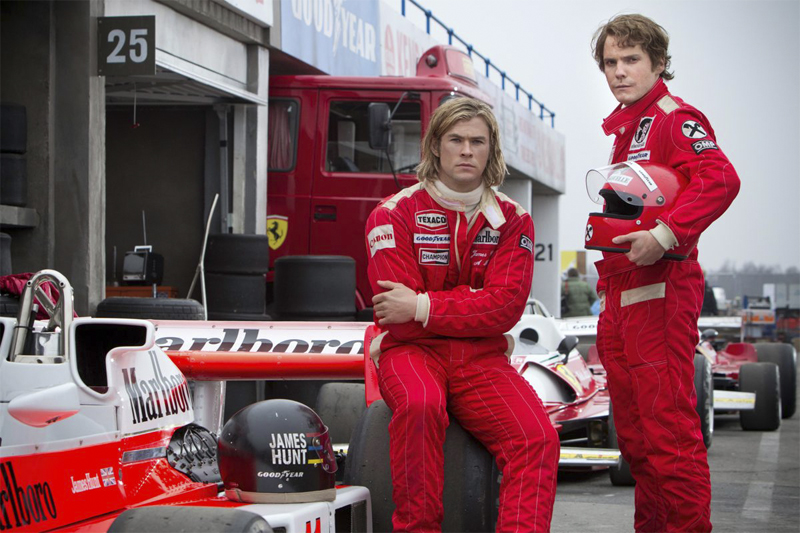 Director Ron Howard’s newest film, “Rush,” garnered hype for the better part of the past year as fans eagerly awaited to be immersed in riveting controversy and a lot of fast cars. Howard’s film delivers on expectations, as his blend of sound, stunning visuals and a Formula One racing storyline entrances viewers.

“Rush” is based on the 1976 battle between Formula One racers James Hunt, played by Chris Hemsworth, and Niki Lauda, played by Daniel Bruhl, as they attempt to cheat death on the racing circuit for a world championship. The story translates perfectly to film, as both Niki Lauda’s horrific injury and the criticism surrounding James Hunt’s playboy antics are unlike any imagined fiction. The movie is both stomach-churning and heartbreaking because Howard does not add any fluff to a womanizing, gruesome and entirely human story of the selfishness and pain that ruined the lives of Lauda, Hunt and their loved ones.

Although full of juicy details about Hunt’s obsession with women, alcohol and drugs, and Lauda’s inability to connect with people on a personal level, Howard’s film largely hinges on the drivers’ fight for the world championship as they race across France, Spain, Japan and Mexico. But here, Howard anchors his story on the struggles of the drivers before, during and after the championship race, instead of the results of the race itself. Howard’s delicate attention to detail transports moviegoers from cushioned theater seats to the hard benches in Formula Three and Formula One racing –– but while the viewer is fully immersed in the brilliant action during the film, we are more invested in the kind of people the men become during their final battle.

The real, burning sound of tires scraping across pavement isn’t something that is easily captured, but “Rush” does it. It would be all too easy to simply include stock racing sounds and tire scratches, but this is a far more visceral attempt by Howard. The viewer feels fully engaged as the beautiful camera angles provide sometimes haunting images across the track as cars race into the unknown. The camera never examines what’s to come for the racer; we’re taking chances alongside the drivers, who face death around every turn and collision. The viewer never knows what’s going to happen, and the visual effects keep us on edge and immersed in the film’s innate unpredictability. The movie gives nothing away, and it’s a beautiful thing.

“Rush” represents something more than fast cars and a nice combination of sound and visuals, though. For viewers who go into the movie having read the Wikipedia pages for James Hunt and Niki Lauda, there is no dramatic reveal — and yet, we are perfectly entrenched in a battle of 1976 that wrecked lives and made careers across the globe. Instead of re-examining the wreckage, Howard lays out every possible human element of these men for the viewer, whether it is through drinking, cars, beautiful women, anger — or even cowardice. I’ll stop short of saying it’s a masterpiece, but this is a must-see for viewers among the blockbusters hitting the big screen in the coming weeks.