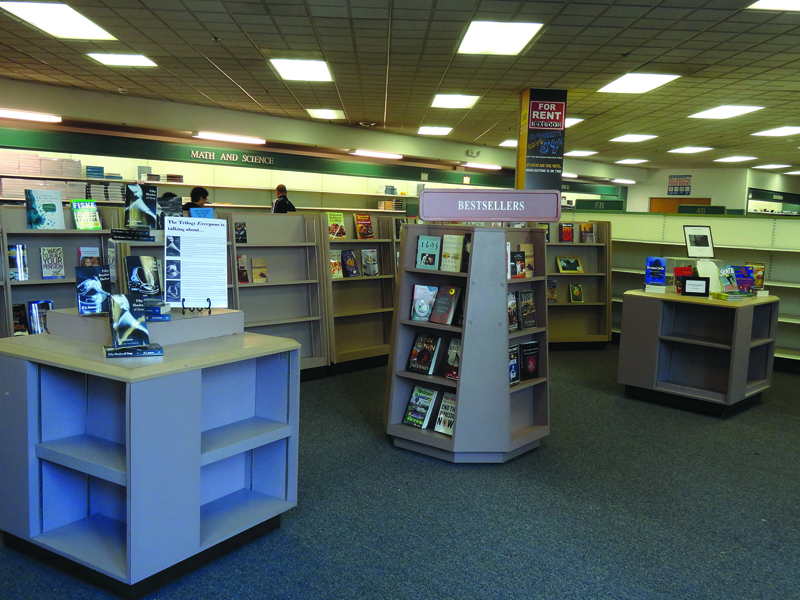 UCR, facing a $1.1 million deficit from falling textbook sales, is about to become the second UC in the system to privatize its bookstore, according to campus officials. Following in the footsteps of UC Berkeley, the university is currently in the process of selecting interested bidders to take over bookstore operations and management on January 2014.

“Forty years ago, (students) were saying books were expensive, so nothing’s changed,” said Scott Campbell, manager of the campus bookstore, when asked about rising textbook costs. “So it’s the perception of what a book means in education and its real price.”

Established in 1954, the UCR Campus Bookstore is a self-funded, nonprofit service that generates revenue solely to pay for employee wages and financial operations. The university is seeking a request for proposal form, which allows bidders to take on both the deficit and overall management of the bookstore under required terms.

The total bookstore sales for the annual fiscal period of 2012-2013 was approximately $6.3 million, but in the last five years, total sales volume has fallen by more than 52 percent amid rising financial costs. Assistant Vice Chancellor of Student Affairs Danny Kim stated that the actual decline is much higher due to increasing student enrollment over the years.

“The bottom line is, the cost of running the bookstore reached a level where it was no longer financially sustainable,” explained Kim. “Textbooks represent the largest portion of our sales (about 70 percent), so if that declines, the total revenue of the store declines.”

University officials reported that due to increasing online competition — both domestically and internationally — informal marketplace exchanges and peer-to-peer social networks, the university has been unable to compete with, oftentimes cheaper alternatives for purchasing textbooks.

Kim cites another reason for the move is due to the inability to continue bookstore maintenance, which, he says, has had a negative impact on a student’s campus experience. “Because of the lack of funds, we are not able to (continue) proper upkeep of the store. Our carpets are very well worn out and needed to be replaced many years ago. Our lights are very dim (and) need upgrading,” Kim said.

During his visit to other UCs, Kim states he noticed a gap in experience between UCR’s bookstore compared to ones in other UCs. “It has nothing to do with size of the campus (or) location of the campus; it has to do with the campus’ ability to provide the funding to have a bookstore that shows very nicely.”

However, according to the Higher Education Retail Market Facts & Figures of 2013, “Sales volume in college stores is determined by many factors, but the major influence on sales seems most closely tied to the size of the institution it serves. Average sales for U.S. college stores were $7.3 million in the 2011-12 school year; median sales were half that, at $3.6 million.”

With Barnes & Noble, Follett and Books-a-Million known as a few of the biggest bookstore distributors in the nation, the university is seeking new owners with expertise and funding. “It’s not somebody from a small store coming in to operate the store,” said Kim. “These are huge firms.”

Prior to the transition, the university requires that the new owners maintain the same level of services, rehire five student employees and five staff workers, and sell the same merchandise and amenities currently offered. “One of the requirements is that they operate at the minimum hours that we currently operate,” said Kim. “So in that sense, nothing will change and I have a feeling that the operators might want to expand their hours.”

Falling textbook sales within campus bookstores is a ubiquitous problem throughout the UC system. Even the nearby campus of Riverside Community College (RCC) turned to private management of their bookstore and contracted with Barnes & Noble due to monetary struggles. Out of the 10 UC campuses, UCSF closed its Mission Bay and Parnassus locations in 2011 and UCLA’s bookstore is currently student-run; UC Berkeley’s bookstore is privately owned by Follett.

Back in 2009, the university sought to mitigate the increasing deficit by sending out a campus-wide survey to identify students’ textbook-buying behavior. The survey results revealed that students who buy textbooks from the campus store are freshmen, while only a small percentage are upperclassmen.

Over the years, the university explored ways to increase revenue through the Textbook Rentals program, electronic books, online marketing and improving the campus website. The university also sought to increase the inventory for special orders, such as class-specific lab kits. Due to the lack of demand, the trade books  — books intended for general readership — that once existed in front of the bookstore were removed and the area was converted into a student lounge in early 2013.

Despite efforts to increase revenue, university officials reported that the only realistic options for the bookstore involved moving it to private management or closing it down entirely. With the latter option appearing “unappealing,” the campus administration decided to stick with the former option.

UCR bookstore employees such as Geoff Clouser, a UCR campus bookstore administrative assistant of six years, provided their thoughts on the recent news. “My initial reaction was: Well yes, it’s about time,” remarked Clouser. “I knew it was coming.”

Students, such as senior political science major Katherine Koca, had been content with the general apparel and merchandise offered at the bookstore. “I don’t get my books there (but) you can get pretty much anything,” said Koca. “I think there’s more souvenirs than anything like shirts, sweaters (which) I think are one of their best products, actually, because they’re durable.”

Koca said that the campus bookstore offered convenient services for students, but the need to maintain stocked shelves should also be prioritized. “I know a couple of my (ethnic studies) classmates were like, ‘They ran out of books! What are we supposed to do?’” she said.

The university’s campus bookstore will transition to private management by July 1, 2014.