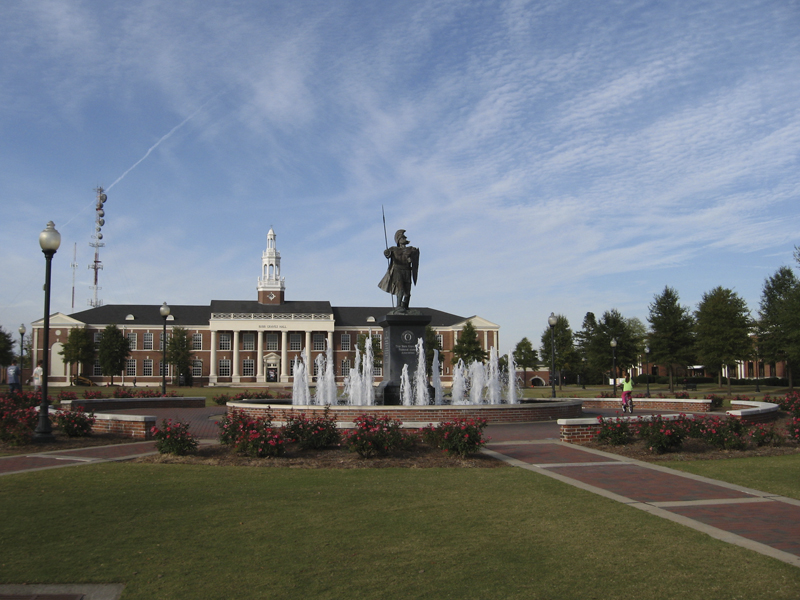 The Great Recession hit public universities hard. Facing dwindling revenues, states slashed their budgets in furious attempts to get back in the black, and public universities found themselves staring into the blade of the guillotine. Many tried to turn to donations from alumni and local communities, but they were facing their own financial difficulties and were not ready to open their purse strings. At the same time, a college education surged in demand, with newly unemployed workers going back to school to obtain a bachelor’s degree and join the upper echelon of workers with a 3.5 percent unemployment rate. Faced with a surge in demand and a decrease in the ability to supply, public universities had to change something — or go extinct.

Evidently, for some colleges, the answer may be to inject a religious strain into public universities’ DNA.

Backed by the Catholic Church, Troy University, Alabama’s third-largest public university, has decided to build a faith-based residence hall called the Newman Center. The university is happy because it adds another 376 beds for students, and the construction and maintenance are privately funded, meaning the university can kill both its student population and funding problems with one stone. And yet, in striking this deal, Troy University has run afoul of the thin line that separates church and state.

Rather, the problem is that the residence hall is designed to accommodate one religion above all others. Though university officials tout the Newman Center as open to students of all religions, taking one step into the hall is enough to see that it is built with one particular audience in mind. Chalkboards in the middle of the dormitory feature passages from the Bible. More verses are printed on slips of paper and placed on the hall’s welcome desk. In the hall’s ministry center, “evenings are given over to clergy-led discussions on the meaning of God.” Alcohol is forbidden, even for those of drinking age. Even the name of the residence hall comes from a figure in Christianity — Cardinal John Newman.

One student, Justice Gray, openly acknowledges that Christianity is the reason she decided to stay in the Newman Center, explaining, “I like the Christian feel of it.”

It is not wrong to have a residence hall devoted to supporting a Christian community, and non-Christian students who live in the Newman Center say they haven’t been pressured to join Christianity. This is good and as it should be.

But why should the opportunity to live in a predominantly Christian community be the only opportunity offered? There are no residence halls catering to Muslim or Jewish students at Troy University. It is true that nobody is forcing students who practice non-Christian faiths to live in the Christianity-predominated Newman Center. But unlike devout Christians, there is no recourse for them. Troy University is simply not offering non-Christian students a similar opportunity.

Troy University technically does not operate the Newman Center; nor has it paid to construct the facility or maintain its upkeep. But a private organization closely affiliated with the university, the Troy Foundation, does. That foundation leases the land from the university for a nominal $1. The Roman Catholic Archdiocese of Mobile itself is leasing from the Newman Center to keep a chapel running around the clock. The ongoing allowance of these leases is Troy University’s way of tacitly endorsing a Christian-based residence hall on its campus.

With a predominantly Christian student population, Christian messaging populating the residence hall and finances coming from a Catholic organization, it is clear that one single religion is being allowed predominance in a public university. This is occurring in spite of the fact that the First Amendment to the United States Constitution prohibits the “establishment of religion.”

When the United States first crafted its constitution, it wasn’t perfect. The document outlined the powers of the three branches of government and gave some small details on how to issue amendments, but the vast majority of the protections we have come to accept as an integral part of our founding document were absent. There was no protection against search and seizure without a warrant; no provision for a right to bear arms. During a trial, the accused could not plead the fifth — there was no fifth amendment to plead to.

The lack of protections for ordinary citizens was so troubling that the first Congress decided to rectify the situation and pass the Bill of Rights, a series of amendments that would guarantee people certain inalienable rights. And in the very First Amendment in the very first lin, that the very first Congress wrote, “Congress shall make no law respecting an establishment of religion, or prohibiting the free exercise thereof …”

The location, order and clarity of this part of the Bill of Rights all make it abundantly clear that the Founding Fathers took the issues of religious freedom and religious tolerance very seriously. Haunted by the ghosts of persecution, they wanted to ensure that every person would have the freedom to practice his or her faith without being socially ostracized for doing so. The government would not siphon taxpayer dollars from people who believe in a variety of religions to build an edifice glorifying a single religion.

Unfortunately, Troy University’s new religious dorms do all of these things. Non-Christian students who desire a community of their own are left out. And though the university is not outright funding the faith-based dormitories, it is effectually doing so by having the Troy Foundation do so on its behalf.

Instead of only providing lip service to religious freedom, Troy University must embrace the words and spirit of the First Amendment and ensure that people of all religions feel welcomed on its campus. Opening dorms for people of other religions is just a start. Only then can students be able to have the spiritual conversation Troy University officials hope to provide.