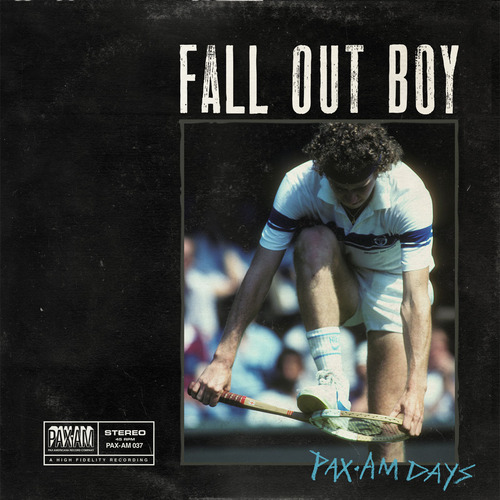 After their return to the mainstream rock scene with the album “Save Rock and Roll,” Fall Out Boy is back six months later with an eight-song EP, “Pax Am Days.” In this release, the band strays away from their catchy, arena-rock sound for a raw, punk-rock roar.

Each song is a quick burst of energy, with seven of the eight tracks clocking in under two minutes long. From the opener, “We Were Doomed From The Start (The King Is Dead),” we are given a gritty riff that lets the listener know this EP is going to be different from anything Fall Out Boy has ever released. The stripped-down music production, constant drum-fills and fast chords make for some quick, aggressive punk-rock, and Patrick Stump’s pop-soul vocals follow suit. In songs like “Demigods” and “Art of Keeping Up Disappearances,” Stump’s voice complements the instruments by keeping up with the urgent tempo changes without having to give up his signature vocals. Both songs even have satisfying solos that will surely keep any rowdy crowd moving.

The punk influence is definitely strong throughout the album — the short song lengths, the low quality music production — but it is never as apparent as it is in the song “Eternal Summer.” The track begins with the chanting, shouting proclamation, “I need more oxygen / Our days were never numbered / This is eternal summer!” Stump’s raspy voice falls short here, coming across as a watered-down Cheap Sex song or a Ramones demo that never met completion. He has some nice vocal runs throughout the verse, belting out multiple syllables over frantic instrumentals, but due to the speed and tone his words become inaudible. It is meant to be an energetic track, but that is all it ever will be, losing the heart that makes Fall Out Boy –– well, Fall Out Boy.

Even though the band has opted for a faster, more urgent song structure than the big-arena hooks and choruses for which they are known, songs like “Hot To The Touch, Cold On The Inside” and “Caffeine Cold” are reminiscent of previous songs in the band’s catalogue. These two songs utilize Stump’s voice to create a catchy melody, making the songs most similar to the pop-punk influences found in their second album, fan-favorite “Take This to Your Grave.”

For Fall Out Boy fans wanting the band to continue the style from their earlier work, they won’t find it here. The songs have an infectious feel to them, each one pulling the listener in with its quickness. Fall Out Boy took a chance experimenting with a punk-rock sound, while maintaining a sound that is undeniably theirs. If you have 14 minutes to spare and appreciate the fast chords of punk rock, this EP might be for you.