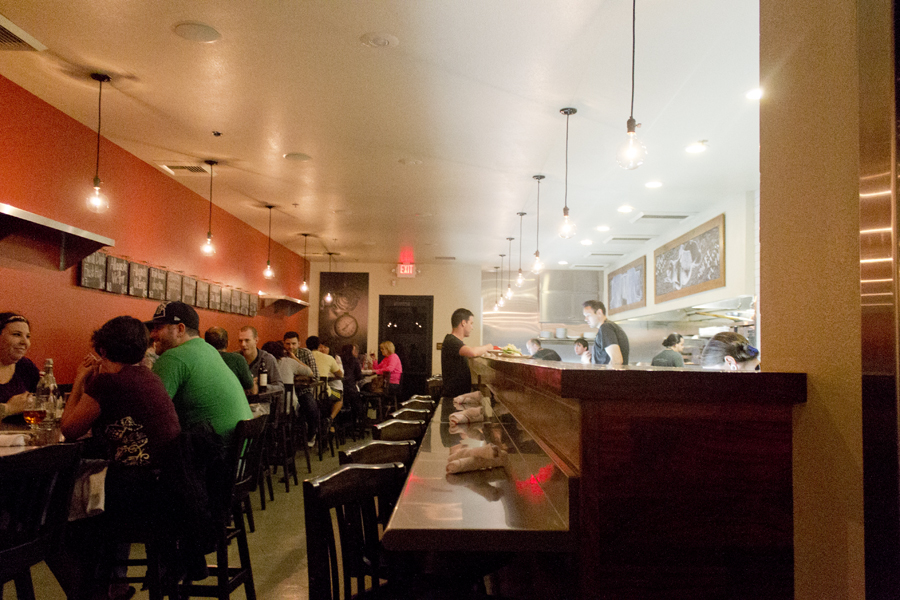 According to its website, The Salted Pig in downtown Riverside has billed itself as “the Inland Empire’s first gastropub.” I had to look up what a gastropub even was, and it turns out the definition is: a bar and restaurant that serves high-end beer and food. With a description like that, I could only wonder what I was going to get myself into.

When I got to the Salted Pig, I was greeted by two enormous wooden doors befitting a castle, and I could only think that I was about to enter a pig king’s lair. Walking into the dimly-lit restaurant with high ceilings and brick walls, I was immediately taken to a whole new world — one where things at the bar were stored in mason jars and water was brought out in a glass bottle like an old-fashioned milk bottle. In this world, new was combined with old to create a quaint, but trendy aesthetic. During my visit I heard music from The Beatles to Dion and even to Bobby McFerrin’s “Don’t Worry, Be Happy.” An old film was also playing on the screen behind the bar, which gave the ambiance a heightened sense of artistic sophistication. I felt like I could just sit back and enjoy the setting while being with friends.

As you might be able to tell by its name, pork was a primary culinary theme and several dishes incorporated it in some creative ways. The menu has everything from pig flatbread, pork belly sandwiches, bacon fat popcorn and pork rinds in addition to the more standard items such as mac and cheese, lamb sirloin and burgers.

I decided to try the Filthy Fries first, which consisted of beer cheese, crackling dust, herbs and roasted garlic. Being a fan of In-N-Out’s Animal Style fries and Getaway’s Monster Fries, these fries did not disappoint. In fact, other establishments’ fries couldn’t compare to the Salted Pig’s. The warm, melted beer cheese was tasty and filling, with just the right amount of garlic flavor that didn’t overpower each fry. This “snack” (as it is called on the menu) is definitely a must. It is a good dish to share with others before a meal.

For my main course I chose the M.S.G. Burger with enoki mushroom, slab bacon and gouda and a side bucket of fries. The burger was smaller than an average burger, but happily deceiving in how filling it could be. In my first bite alone I could taste the juiciness of the meat and sauce mixing together to create this mouthwatering masterpiece. The burger was the perfect blend of sweet and salty; the sweetness coming from a handful of julienne sliced granny smith apples.

But if there was one thing that really made the burger as good as it was, I’d have to say it was the bun. We may not give buns enough credit for their added taste to burgers, but after tasting this burger, I’ve learned that a great bun really does make a difference. This bun was soft, buttery and flaky — a perfect touch to the already delicious burger. The Salted Pig makes it known to their customers that they do in fact make everything themselves, including the bun. Had it been just any regular flat bun, the burger wouldn’t have tasted as great, even with the excellent sauce and meat.

Sadly, the bucket of fries was merely mediocre. After having Filthy Fries, they just didn’t compare. They were really thinly sliced and not as crisp or tasty. The ketchup, on the other hand, was noteworthy because it was not Heinz or any other brand you can buy at a grocery store. Instead, it’s homemade, and you can taste it in how fresh and full of flavor it is. It also has a hint of spice which made it more enjoyable than the average bottled ketchup.

Despite not being able to finish my burger, my friend and I decided to try dessert. The dessert menu (labelled as “Happy Endings”) includes ice cream, donuts and shortcake along with a few other items. We decided on the strawberry-filled shortcake. As everything else, presentation stood out. The cream was oozing out of the cake onto the plate. Real strawberries were used along with homemade strawberry cream and meringue cream. The shortcake was warm and melted right in my mouth. Each bite was sweet but surprisingly salty. After eating a strawberry alone, my friend and I concluded that it was the strawberries themselves that were adding the saltiness to the dish; they must have been soaked or prepared with salt. Like the burger before it, this combination of salty and sweet was amazing, and a perfect way to end the meal. It truly was a “happy ending.”

The Salted Pig combines sweet and salty to create a different meal — one that is rich in flavor and definitely memorable. Although prices are higher than an average diner, the experience you will have in one of Riverside’s jewels is well worth it.