Highlander
Home Features UCR Gets a Fix of Josh Boothby 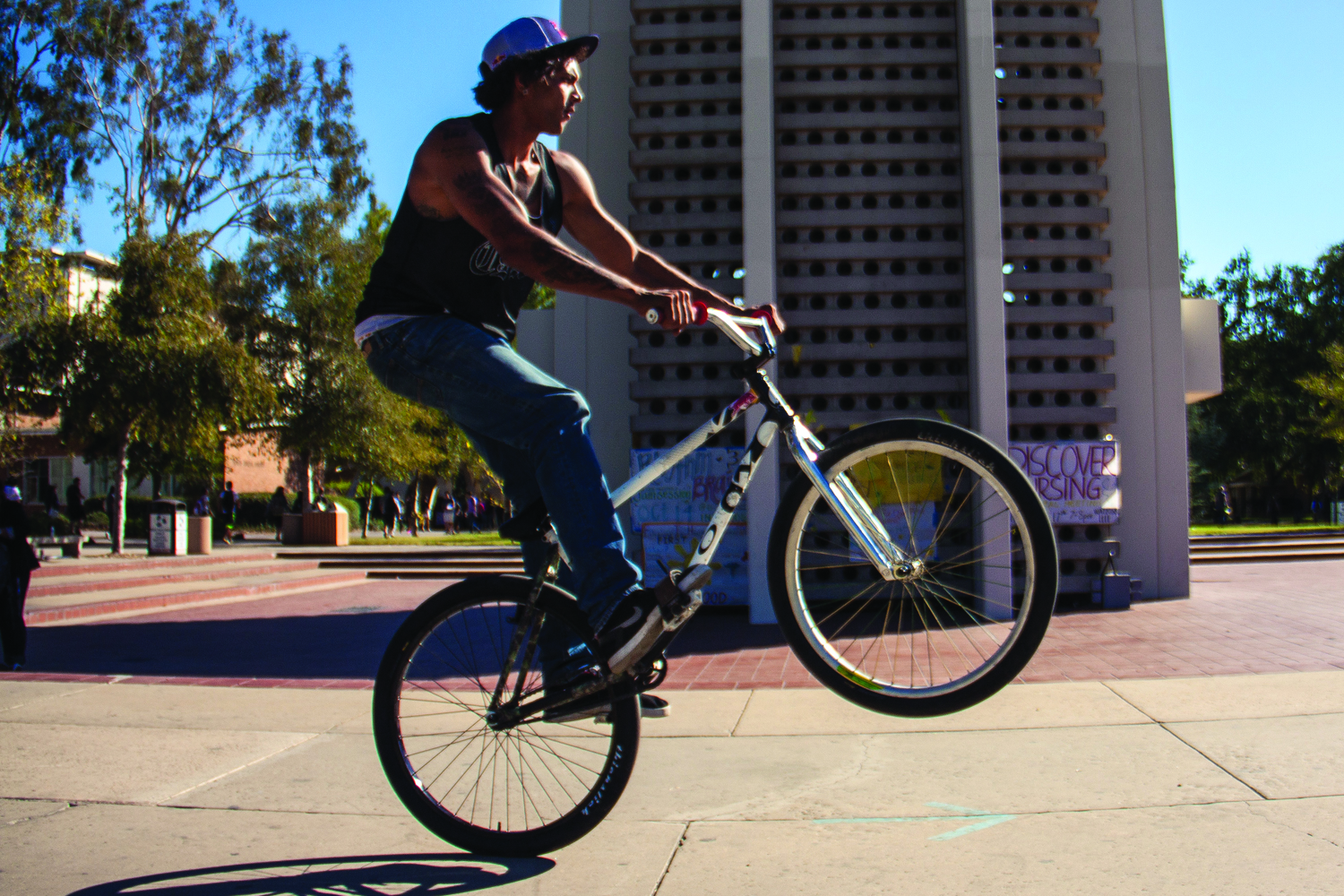 While many students were winding down from last Wednesday’s Nooner, those on bicycles were just getting started. With ideas spiraling in their minds, determination radiating from their eyes and bicycle wheels planted firmly on the ground — but not for long — the students used the staircase that surrounded the Bell Tower as a playground. The wheels grazed over the brick and slid across the benches. Whether it was the extra shot of espresso from Coffee Bean or the buzz of midterms soon approaching, the students pushed the limit to defy gravity.

But then the hot wheels briefly paused as a new gang of bikes floated across the grass toward them. As soon as the first wheel of this new group hit the concrete, they made themselves at home and, without introduction, students knew instantly that they were kindred spirits. UCR and UCR’s bike shop Pedals welcomed Josh Boothby, a professional fixed gear bike rider, and some of Red Bull’s Ride and Style for a performance. I was lucky enough to watch the show and even get an interview with Boothby in order to dip into his life and learn how he managed to perform “Matrix” moves on two wheels.

28-year-old Josh Boothby greeted the students with a humble hello and an eager glow, sizing up the performance space. “This is like rider’s paradise!” he exclaimed as he hopped onto his bike and rode backward to continue his tour around the Bell Tower. Hands in his lap, he pedaled around with the occasional glance behind for any possible human speed bumps.

Born Oct. 20, 1985 in Hayward, Calif., Josh always longed for the fast life. He received his first bike at 11 from his father, who removed the training wheels two weeks later. But the real spark that ignited the rider within was attending the X-Games in San Francisco soon after. “I saw what was capable on a bike and went to the skate park across the street and stared at them for hours,” he said. Soon after, he tested his own capabilities. “You have to measure timing, space, ability … just to nail one trick,” he noted, as if he was mapping out a scientific formula.

It was hard to keep track of Josh when he was atop his bike. Look down for a second, and he was already on another wheeled extravaganza, probably riding backwards. He started at the top of the Bell Tower staircase and tested the laws of physics as he hopped down each stair on the bike’s back tire, while turning 45 degrees each time. Coming from someone with the coordination of a baby deer, I shared the astonishment and excitement of the crowd when he landed successfully with a victorious fist pump.

Josh, bedecked in a snap-back and several tattoos, became a rider for Red Bull’s Ride and Style about three years ago. He competed in only two fixed gear competitions before he won first place and gained Red Bull’s attention. Red Bull then offered him a sponsorship to help transform the way society viewed biking and to also spread the word of “fixie” biking. “Some say fixed gear riding is cultured or underground. But it’s a sport!” Josh exclaimed.

Through his travels he proved this theory, as the most unlikely people knew about the sport. During his time in New York, Josh participated in a street performance where he met people who shared the same appreciation of the sport. One gentlemen approached Josh with slightly broken English but full interest in the bike. “Fic gear, fic gear!” the gentlemen chanted, pointing at Josh’s bike. Josh lept off his bike, unsure if he was more confused that the man knew about “fixie” riding or that he wanted to hop on his bike. Josh stepped away, handing him the handlebars to test it out. Sure enough, the gentleman hiked up his shirt and attempted a 360.

Josh continued to run the Bell Tower playground, jumping from bench to bench, sliding across, and spinning in midair for a grand finale. More and more skaters and bike riders came to join him as well as Pedals. They watched Josh ride the side of the Arts Building and jump over steps — just “fooling around,” as Josh called it. Sweeping the dust from his tires, he explained that he never thought he could call what he does a job. “I always thought I was going to be a 9-5 kind of guy,” he said. But when he peered around at the younger students trying to mimic the tricks he just pulled he just smiled, and said, “Yeah, I love my job.”

Josh, along with Ride and Style, have traveled to and performed at several schools now, but, according to them, no crowd was like the one at UCR. When the crew visited Cal Poly Pomona, they performed for two people. But since his travels began, the crowd has progressively grown and grown, and the one at UCR was the best turnout they’ve experienced yet.

One of the members of Pedals dared to conquer one of Josh’s tricks on the stairs. The Ride and Style crew, Pedals, and onlookers on their way to class stopped to watch him rotate and hop down the stairs, all on one tire. Each time, inches from success, the crew grew louder with encouragement. “Come on, don’t cheat the trick!” Josh yelled. With that, the student was  successful and celebrated with a fist pump. Boothby high-fived the ecstatic student and said, “Well, looks like someone wants a Red Bull sponsorship from me.”

According to Josh, the best part of the job is meeting new people. The gleam radiated out of his eye when he went over all the people he met and who shared the same passion he did. “I would have never expected my life to be what it is today,” he said, nodding to each accomplishment he has had. Josh’s story is one many students can relate to: starting from the bottom with nothing but a dream, and through practice and determination, gradually rising to success.