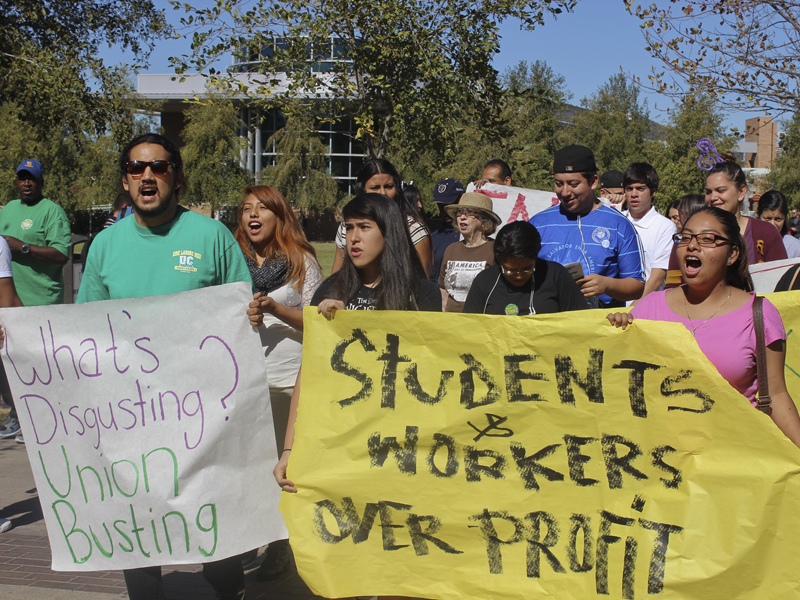 For the past five months, UC campus and hospital workers of the American Federation of State, County and Municipal Employees (AFSCME) 3299 have been on strike in hopes of negotiating a “fair contract” with UC executives. According to AFSCME 3299, the UC system implemented “drastic cuts” on 8,000 of the universities’ lowest paid workers, and 12,000 patient care workers.

With no signs of a negotiations being made anytime soon, UCR students of United Students Against Sweatshops (USAS) Local 19 and AFSCME members assembled at the Bell Tower to support the union with a march and rally as part of “Hallo-Week of Action.”

“The event is part (of the) national week of action,” stated fourth-year ethnic studies and history double-major Norman Barrios, a member of USAS. “We’ve had a week of action where we’re addressing AFSCME 3299’s contract … We’re building a coalition where we bring students, we bring unions and stuff like that.”

According to AFSCME, the cuts to the workers have reached six figures in some cases. “The recent cuts amount to a 1.5 (percent) decrease in take home pay for workers making an average of $35,000 per year, and up to $124,000 in higher health costs for each worker in their lifetime,” stated a press release by the 22,000-member union.

The rally began at 12:25 p.m. near the Bell Tower with a crowd of about two dozen students and workers. Members of the rally marched across the campus, cutting right through a graduate school fair near Rivera Library and packed lunch tables at the Highlander Union Building. During the march, demonstrators roared phrases such as, “What’s disgusting? Union busting!” Spectators paused to acknowledge the roaring crowd, snapping photos and receiving flyers that were being distributed by the rally members on campus.

“It’s an issue to where I wouldn’t be able to live a decent life with some dignity,” Leo Tolliver, an equipment operator on campus, told the Highlander during the march. “The UC is basically saying they don’t care about us as workers. They’re not going to give us a raise, but they’re going to raise our health care.”

In addition, Tolliver explained how the struggles of UC staff members correlate with those of students on campus. “Our students hold a lot of power here. They pay tuition,” he said. “The chancellor was willing to meet with students and hear their concerns. Some of their parents work on campus, so they know what’s it like to not have money. We’re saying enough is enough.”

Other UC employees also commented on AFSCME’s relationship with UC students. “We are here standing in solidarity with the students because we know our fight is your fight and it’s all important,” said UCR Mail Services employee Curtis Washington, a participant of the rally. “I have much respect for you guys, I love all of you. Just hang in there a little bit longer and don’t forget where you come from.”

The crowd returned to the Bell Tower for a last rally after the march. The event concluded with students and workers giving speeches and adding final comments about the rally and the contract negotiations.

The event came on the same day that the UC announced that university officials and the University Professional and Technical Employees (CWA-UPTE) union — which represents more than 12,000 health care professionals, researchers and technical employees at the UC’s campuses and medical centers — had agreed to meet again and “make reaching settlements their top priority.”