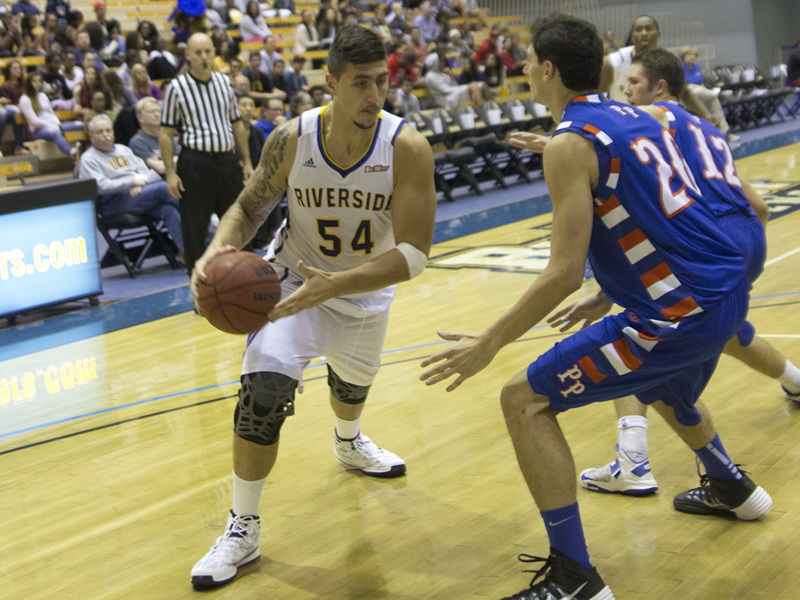 New kids on the block — no, not the boy band — Steven Thornton, Nick Gruninger and Sam Finley, the newest additions to UCR’s basketball squad, each scored in double figures as the Highlanders defeated Pomona-Pitzer 83-73 on Friday night in their final exhibition game of the season.

Playing their first game in front of the UC Riverside crowd, the trio of Highlander rookies along with center Chris Patton wowed the audience with crisp passing, timely jumpers and difficult finger rolls against an inferior but pesky Division III school.

“I was really pleased. I thought those three guys had a really good game tonight,” Interim Head Coach Dennis Cutts said. “We got a group of guys right now when they take the floor, they feel like they’re going to win. And that’s a hard thing to get into team, so I’m excited about that.”

UCR opened the 2013 season with an undefeated three-game trip to Vancouver and carried that Canadian confidence to the Student Recreation Center Arena on Friday. The evening began with Thornton scoring the first of his four three-pointers of the night. Powered by the inside presence of Patton and the savvy court awareness of Gruninger, UCR built a nine-point lead at the half that they extended to double digits in the second period. The Sagehens offered resistance late in the second half as they cut UCR’s lead to as few as three points before the Highlanders regained their composure to close the game, 83-73.

UCR shot 53.7 percent from the field while connecting on 53.8 percent from beyond the arc. Patton scored 27 points and grabbed seven rebounds during the night. Thornton made five of six shots for 19 points, knocking down all four three-point attempts while freshman guard Finley tallied 11. Junior transfer Gruninger finished with 14 points, five assists and four rebounds while running the Highlanders’ offense. Coach Cutts was particularly mindful of the point guard’s impact on the game.

“He’s a true point guard and very skilled. I want the ball in his hands at all times,” he stated. “I said that in July when I got the job and I’m going to say it every day because I trust him. His IQ is very, very high. He makes players better.”

While UC Riverside won all their preseason games, there is still an urgency to continue improving coming off of an underachieving campaign last year. Coach Cutts focused on defensive rebounding, free-throw percentage and turnovers as key areas of concentration, and noted how important the feeling of winning is to his team.

“One of the things when I got this job, we were coming off a six-win season. It was very evident that we needed to feel better about ourselves and win some games. In the three games in Canada, though it’s not the competition we’ll face all year, and this game, we needed to learn how to win. And I felt like they did that through this stretch.”

The Highlanders tip off the regular season on Friday, Nov. 8 against San Diego State.

A handful of times in a season, teams enjoy total beatdowns of their opponents. On Saturday afternoon, the UC Riverside women’s basketball team, with only about a quarter of the men’s basketball crowd, pummeled California Baptist University, 91-56. The Highlanders outshot, outrebounded and outworked their Division II foe while six players scored in double figures for the day.

The afternoon started with seven unanswered points for UCR. It got no better for the Lancers as the Highlanders went on a 19-0 run midway through the first half to go up 34-11 and eventually 48-23 at intermission. Playing smart and sound basketball, UC Riverside continued to dominate in every facet of the game as they pushed their lead to as many as 38 points. CBU cut the advantage to 24 on two occasions, but never got any closer as the home team closed out the game, 91-56.

With solid defense, successful give-and-gos and team rebounding, Riverside proved that their city rivals were simply overmatched. UCR shot 48.5 percent from the field, connecting on four of seven three-pointers, while holding Cal Baptist to 27.6 percent shooting for the contest.

The Highlanders start their regular season on the road as they compete against the Hawkeyes on Nov. 8 in Iowa City, Iowa.