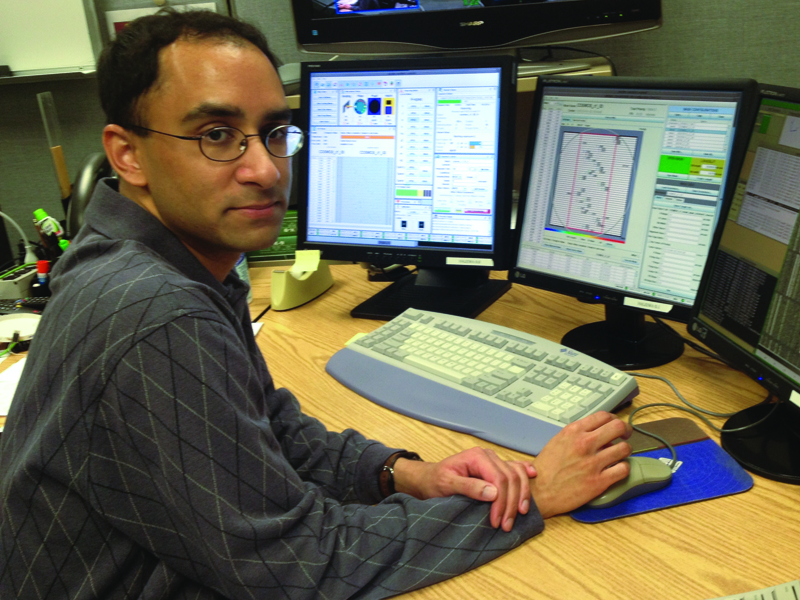 UC Riverside professors Dr. Naveen Reddy and Dr. Bahram Mobasher, in collaboration with astronomers from three other institutions, have found what is not only the most distant galaxy in the universe but also the oldest known to date.

Part of the success of finding the galaxy, z8-GND-5296, came from utilizing the new multi-object infrared instrument MOSFIRE at the KECK Observatory in Hawaii. Due to the efficiency and sensitivity of the Hubble Space Telescope, they found the galaxy early on in the search, at a distance of 13.1 billion light-years away from Earth. It formed only 750 million years after the Big Bang, which is believed to have marked the start of the universe.

While today, the galaxy grows and continues to move further away from Earth due to the nature of our expanding universe, pictures from the telescope show the discovered galaxy as it was in its infantile formation; the expansion rate determines the age of the universe in light-years. According to Mobasher, light takes an extremely long time to travel, at an approximate rate of 186,000 miles per second.

“The idea is to do these observations over the next three years, and through this to investigate physical properties of galaxies,” Naveen Reddy said about UCR’s goals in pursuing the project.

The National Science Foundation (NSF) awarded the researchers — including Brian Siana, assistant professor of the physics and astronomy department — a three-year grant of $975,000 and a 44-day stay at the observatory to study high redshift galaxies using the method of spectroscopy. The interaction of matter and radiated energy allows people to study light properties, particularly wavelength and frequency.

If an object is moving away at a given velocity, the wavelength increases and produces the titular redshift in the visible light spectrum. The recording of the redshift for this galaxy was unusually high at 7.5, which confirmed that, by being a large number, the galaxy is the furthest to date.

By studying such galaxies and comparing them with others, researchers can begin to construct a chronological evolution of galaxy formation. Finding extremely old galaxies like this one provides information about the formation of the universe. Many scientists believe they know what happened right after the Big Bang and understand the general mechanisms the universe had gone through, but only recently have the details of this period, called the Era of Re-Ionization, have been made clearer.

In order to create molecular hydrogen once more, a reaction of neutral hydrogen and an electron would have to give off equal energy. Due to the change in electron states, Lyman-alpha photon particles are commonly created. Scientists can measure the amount of Lyman-alpha photon particles from a galaxy, and can then make inferences about the amount of neutral hydrogen in the galaxy.

This factors crucially into the study of galaxy evolution because the team believes stars ionize the hydrogen in the universe. If they are correct, scientists can better understand how hydrogen, and hence matter itself, was formed.

Relative to the UC system at large, the astronomy department here is few in number, with only a total of five professors. Reddy has many future aspirations for the university. “We want to build the department to get more faculty to do the type of science demonstrated here to take full advantage of upcoming facilities,” he said.

With an increasing tuition, there is a growing demand for a more focused undergraduate and, in particular, graduate degree that can steer future astrophysicists away from physics courses not pertaining to the field. “It would be cool to have a degree just for astrophysics. I would definitely think about taking that,” said second-year student Johnathan Alvarado.

The other institutions involved in the galaxy’s discovery include the University of Texas, Texas A & M University and the National Optical Astronomy Observatories. Those wishing to learn more can check out the results published in the Oct. 24 issue of “Nature.”