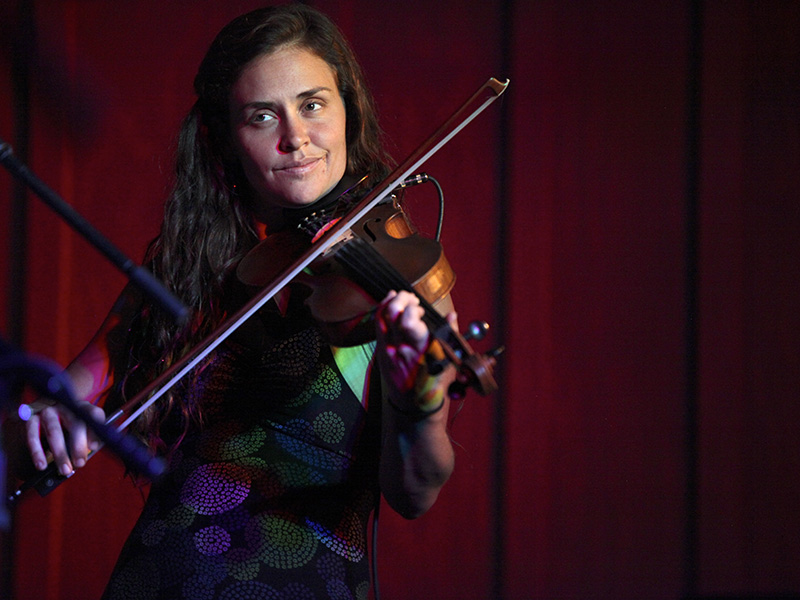 A crowd cheering, people dancing the night away, soft and beautiful songs filling the room –– these are a few of the things that I was surprised to take away from the Elephant Revival show at the Barn. As a huge music enthusiast, I have been to many concerts –– rock, rap, dance and various other genres — but never a folk show. However, after taking a liking to a couple of Elephant Revival’s songs following a grueling week of midterms, I figured the show would be a nice little break from reality.

As I entered the Barn last Wednesday night, I immediately felt a spark of vivacious energy in the atmosphere. The audience was filled with many different faces –– older people who were fans of the band, and students who were just looking for a unique experience away from the troubles of midterms. And that night, a unique experience is definitely what everyone in the audience received.

The room immediately went silent when opening act, Frank Fairfield, walked onto the stage. Equipped with his violin, guitar and banjo, the one-man-band showed everyone in the audience how a young soul could bring back an old style of folk. As he began playing, the small audience was immediately drawn in by the beautiful melodies of Fairfield’s violin. The experience was like a story being told around a campfire. Most of the audience sat down and huddled around the stage, listening as the soft-spoken musician described his songs and played organic medleys.

Fairfield’s instrumentation was like nothing I had ever heard before. He switched back and forth from banjo to guitar to violin, powerfully stomping to the rhythm. While a great number of audience members talked amongst themselves, the rest of the crowd watched Fairfield, amazed. As opposed to big stadium concerts, the Barn’s small and intimate setting helped listeners build a connection with the music. The cozy amount of people in the audience made it feel like Fairfield was playing directly to you, and the raw emotion and energy flowing through his instrumentation and singing was palpable. The audience wasn’t just watching a concert; they were pulled into a heart-to-heart experience.

I figured the rest of the night was going to be spent quietly bobbing along to relaxing music, judging from the YouTube videos I saw of Elephant Revival and the crowd’s reactions during the opening act. But while there were points where the audience just stopped and followed along to the music, these points were far and few between. As soon as Sage Cook and Dango Rose stepped out onto the stage and began to interact with everyone, it was as if the band had just breathed life into the crowd; the audience immediately stood up and crowded as close to the stage as possible. As Elephant Revival began to dive into their collection of songs, they were met with cries of joy and elation.

The shoulder-bumping closeness of the Barn was perfect for a band of Elephant Revival’s nature. Once Cook began playing “Go On,” one of their biggest songs, the crowd’s excitement grew; being in the middle of a small crowd allowed for people in the audience to feel more connected with the performance, and it made it a much more closely-knit experience. The band and the audience members began to feed off of each other’s energy, and as the performance carried on, the energy in the room grew. Judging from the smiles on their faces between songs, Elephant Revival began to loosen up, too, and just have fun with the show. Songs like “The Pasture” were met with hollers of excitement. Even though most of the crowd didn’t seem familiar with the lyrics, it felt as though we had heard the song before; the band’s feel-good melodies lightened up the entire venue and made us want to move along to the rhythm.

As the band’s set carried on, the rhythm became more and more infectious. A few brave people began dancing across the Barn floor. Soon, more people joined in, and by the end of the set, a good quarter of the audience was dancing. The crowd’s energy level peaked as the band began playing “Old Rouge River,” encouraging audience members to stomp and clap along to the beat. By this point, there was not a person in the Barn who was not involved. The room was filled with the sound of people stomping, clapping and dancing the night away.

I’ve been to my fair share of concerts over the past couple of years. One thing I grew used to is the craziness and overflowing energy accustomed to these shows. When I imagined a folk concert, I pictured a band playing a very relaxing set to an eclectic group of people gazing intently upon the band. The show was like this at some moments, but became so much more than what I imagined a folk show would be. We came to the Barn to enjoy the show and have fun, and to free ourselves from the stresses of the week. Elephant Revival helped everyone in attendance do just that.