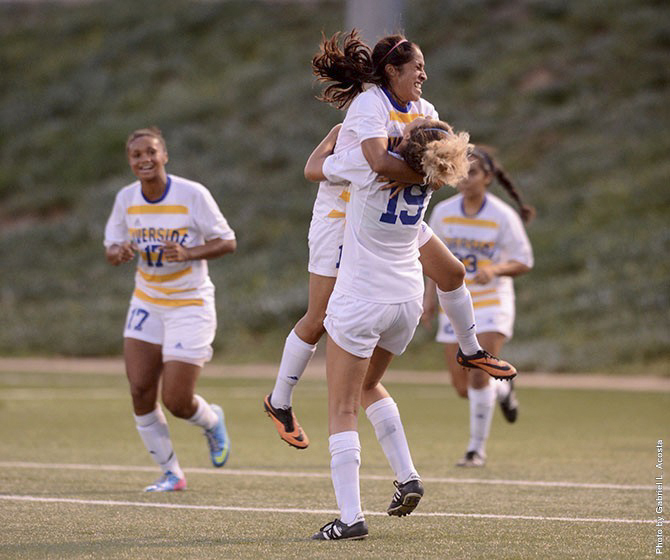 Three months ago when the first cleats pierced the field and checkered soccer balls took flight, no one could have predicted the year the women’s soccer team would produce. They endured painful defeats before partaking in a televised conference championship game for an opportunity to play in the NCAA tournament. Underdogs in most eyes and picked to finish last in the preseason coaches poll, the Highlanders are certainly the Big West Conference’s Cinderella story. Their fairytale run ended on Sunday at the hands of the Cal State Fullerton Titans. The Highlanders battled to a 1-1 tie before the Titans won their fourth Big West championship on penalty kicks, 2-1.

Before they played in the title game, the young core of Riverside players experienced a long season that tested their maturity, commitment and belief in themselves. With nearly every player an underclassmen, the ball club saw its fair share of growing pains. They opened conference play with a 3-7-1 record before winning their first two Big West matches and briefly topping the conference. After upending the Titans on Oct. 13, the squad with a 3-1 record hit a rough patch, losing four consecutive Big West games. “It was about that point when we played in Santa Barbara and lost that game in double overtime,” Head Coach Nat Gonzalez stated. “Cal Poly was the next team, we got rolled over by them. Then Davis — we were in the lead at halftime and blew that game. So when it all came about, starting off so strong allowed us to learn from our mistakes.”

UCR played Long Beach State on Nov. 11 in a must-win game to secure a berth for the postseason. The inexperienced team was prepared, however, as they defeated LBSU 2-1 behind a pair of goals from Tyler Cunningham. “We had been in every scenario possible: We’ve been the favorite, we’ve been in the lead, we got blown away. It was funny how those three losses really ended up helping us against Long Beach,” Gonzalez explained. “Credit to the girls. They stuck with it and I think the two conference wins early on gave them the confidence and belief to know that what we’ve been doing is working.”

In the semifinals against UC Irvine, the Highlanders squeezed out a tight double-overtime game behind a late score by freshman Kelly Velasquez and solid saves from goalkeeper Elizabeth Silas. UC Riverside was outshot by their opponents but continued to plug away at the lead. With the win, UCR returned to the Big West title game for the first time in eight years.

On championship Sunday, the early nerves of the Highlanders showed as they were outshot 5-0 in the first half. It seemed as though Fullerton would secure the title when, with just three minutes left, UCR’s Cunningham converted on a penalty kick to tie the score, 1-1. The squads combined for just three shots during the two overtime periods before the game was sent into penalty kicks. In the shootout, Titan goalkeeper Katie Pulliam stopped seemingly every Riverside attack as the Titans built a 2-0 lead in three rounds en route to the victory, 2-1. Cal State Fullerton won their fourth conference title and received an automatic bid to the NCAA tournament.

“The team was fantastic. We made the tournament for the first time in eight years. None of the girls on this team have experienced that. They’re young, so they didn’t understand the level of commitment that is required to play at the level we played at today,” Gonzalez stated. “Early on (in the season) there was a lot of questions and an unwillingness to being comfortable. After we started getting some results in conference, all of that went away. The difference between today and Thursday was Thursday we kept it at zero and today Fullerton got their goal.”

Earlier in the season, the 2013 Big West Conference coaches poll was released with the media predicting that UCR would finish at the bottom of the barrel. The team used the poll as a motivational springboard for their season. “We read the polls. We made sure the girls knew how the perception was. That definitely was a driving factor,” Gonzalez stated. “And to be fair, last season and seasons prior, there really wasn’t much to show for. It is what it is. We are an extremely young team, which is why the coaches assumed (that). You try not to take it personal.”

Despite coming up short in the championship game, the Highlanders possess tremendous upside. They turned around their luck midseason with a belief in not only themselves, but also coach Gonzalez’s system. “The one word I can pin on (the team) is belief,” the 2013 Big West Conference Coach of the Year explained. “Everybody doubted us and we ended up beating Long Beach, which allowed us to get into the tournament. To win the semifinal game against Irvine, they had a big belief and they showed it every time they played.”

So what is next for the women’s soccer program? An offseason to improve and mature as a unit. A chance for the coaching staff to study tape and prepare for next year’s season. And hopefully a chance to pat themselves on the back for a job well done.

“My expectation for this group is to get back to exactly where we are right now. Hopefully this game and this tournament experience … will carry us forward to get past this hump and get to the NCAA tournament. That’s my expectation. And that’s now the group’s expectation because now they felt it, they did it. For them to (get to the title game), the future is bright.”