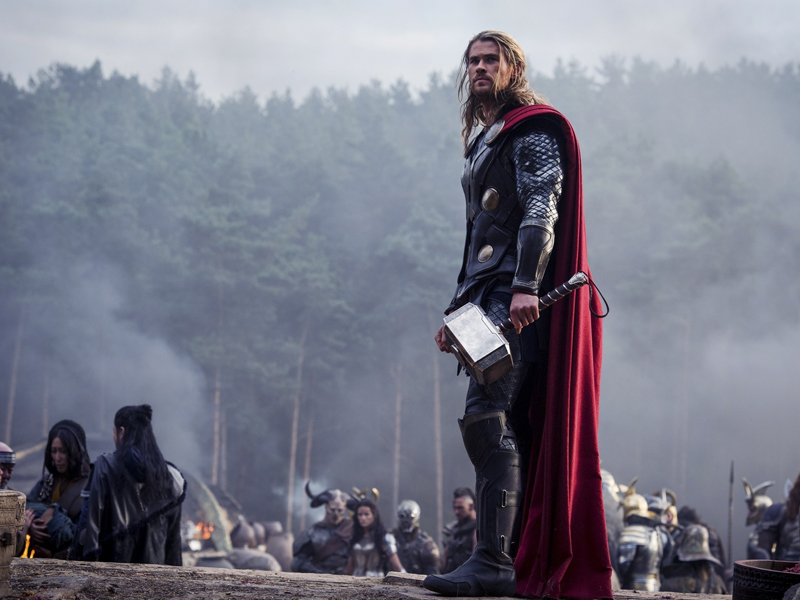 Let’s face it: We all love comic book movies. Whether it’s the heroism, big-budget fight scenes or the humorous antics, movies based off comic books offer something for the kid inside all of us. At a time when the popularity for superhero flicks is at an all-time high, Marvel continues to strengthen its superhero dynasty with its latest offering, “Thor: The Dark World.” While the plot is bleak at times, the film as a whole is a high-action adventure filled with many humorous moments.

The movie begins by recalling the tale of a time before the beginning of the universe, in which an ancient race known as the Dark Elves flourished. After the universe began, the Dark Elves turned to a powerful galactic weapon known as the Aether to return the universe back to the way it was, only to be defeated by the forces of Asgard. Fast-forward to the present: Jane Foster (Natalie Portman), Thor’s love interest, discovers the ancient weapon, awakening the Dark Elves and leading Thor (Chris Hemsworth) on a battle-ridden path to defeat them and protect Jane at any cost.

In accordance with its title, this sequel is darker and more serious in terms of content and character, hovering around themes of death and revenge. Our main protagonist has matured since the events in “The Avengers” and 2011’s self-titled feature; once an arrogant and battle-hungry prince, Thor has transformed into a humble warrior. This transformation is noticeable throughout the film, which isn’t always a good thing; Thor’s refinement leads to some slow scenes toward the beginning, in which the dialogue is bland between him and the recurring characters.

However, “The Dark World” makes up for its lack of compelling dialogue through comedy. From beginning to end, the whole film is filled to the brim with humor. For instance, imagine Thor literally taking a train to travel to battle. It’s the type of humor that has become synonymous with contemporary superhero movies. But while these moments of comic relief help relieve the amount of action in the film, the humor in “The Dark World” occasionally takes away from the action; during some serious fight scenes, there are a few too many humorous reprieves, which overshadow the importance of the battle.

What really gets the film up and on its feet is Loki (Tom Hiddleston), Thor’s brother-turned-Asgardian-criminal. Though his time in the beginning is short, once he gains more importance to the story, the film becomes a lot more engaging. Loki’s playful and sarcastic nature brings humor and lightness to the film’s serious dialogue and subject matter, making the film a more enjoyable experience. Some of the most entertaining parts of the film are the back-and-forth dialogues between Thor and Loki. Thor’s serious nature and Loki’s playfulness clash, making way for some very memorable arguments between the two. Without Loki’s presence, the film’s dialogue would just feel incomplete.

Once the action begins, the audience is completely immersed in the universe of “Thor.” The fight scenes are beautifully shot and keep you on the edge of your seat. The cinematography does a wonderful job of capturing each of the different realms featured in “The Dark World,” such as Asgard, London and the Dark Elf home planet. Once the movie reaches the final battle, viewers are treated to an intense and thrilling fight sequence. Superhero movies have a tendency to try to outdo their predecessors in terms of bigger fight scenes, and compared to the previous Thor feature, “The Dark World” does just that. The film touts amazing fight sequences between armies and giant beasts, and features a far more dangerous villain than its predecessor — which is a good thing because, let’s face it, Loki as the main villain isn’t all that intimidating.

All in all, “Thor: The Dark World” is the kind of film that is designed to make you gaze in amazement at the beautifully sequenced fight scenes, as well as laugh with the characters. Even though the film does nothing to differentiate itself from its predecessors, “The Dark World” accomplishes all of the things that fans expect from the film, as it is an epic, engaging and humorous film for all to enjoy.