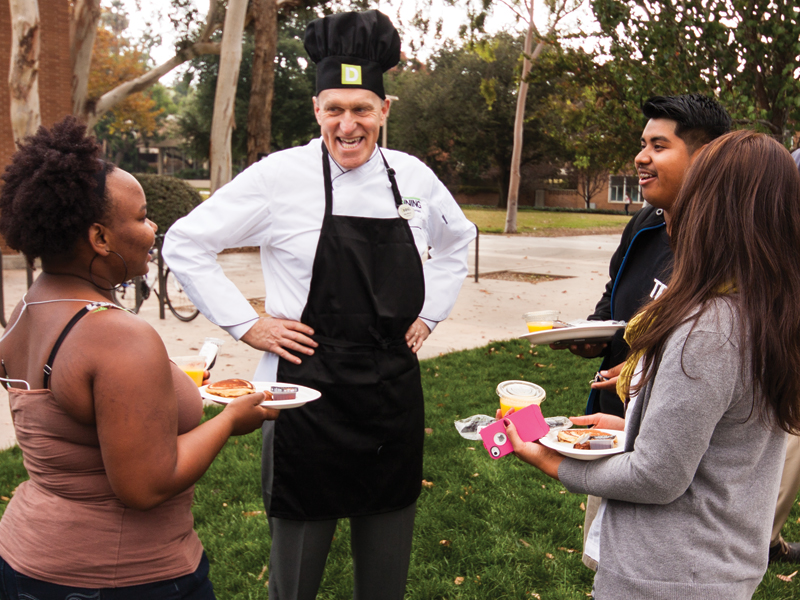 A quilt of clouds rested above UC Riverside Friday morning. Students dragged their feet across campus, including those snuggled in sweats and the occasional blanket-wrapped person walking to Coffee Bean. But instead of the usual large cup of coffee for the end of the week pick-me-up, UC Riverside offered a change for breakfast. Stoves were used to keep the hands of dining hall students and UC administrators warm, flipping pancakes and pan-frying sausages for students. Chancellor Kim Wilcox served up the pancakes as he lived up to his end of the deal of the “Chancellor’s Breakfast” for the Promise for Education

In the wake of budget cuts within the educational system, the UC system worked together to create the Promise for Education campaign to raise money to fund more scholarships and grants and make them more available to students in need. Wilcox made his promise to raise $10,000 for scholarships for students, and in return, serve a pancake breakfast to all of UC Riverside. Six weeks later, Promise for Education raised over a million dollars from about 4,000 donations for scholarships for UC students in need of financial aid. A man of his word, garbed in chef’s coat and all, Wilcox handed over the goods.

Banquet tables dressed in tartan-colored cloth lined the lawn in front of the Bell Tower. Students filtered through the quad to join a line that wrapped around Coffee Bean and receive their breakfast. UC Riverside officials, such as Dean of Students Susan Allen Ortega — who sported a tartan kilt herself — guided students into the holy land of warm, free meals. The line moved like a military march: silent and fast, while the dining staff worked as well as a greased pan. Tents were set up for stations to pick up a plate of a pancake, sausage and syrup along with a cup of orange juice. The sweet scents lured the students closer to the food as the meal was cooked right before them. Even though the students resembled zombies from “The Walking Dead,” all of the workers, including Wilcox, practically cooked the meal with their high energy and simmering spirit. Smiles beamed across the staff who poked fun at Chef Chancellor.

Whether it was the energy emitted by the staff or a breakfast with more substance than purely caffeine, students soon woke up to enjoy the morning and company. Once the Bell Tower struck 9 a.m., classes poured out with hungry students, and then pancakes were really flipping. But as the line finally died down, Wilcox made his way over to the tables. Greeting him with picture requests and shaky handshakes, students treated him like a bona fide celebrity. The chancellor went around to each table to make sure all students felt that he upheld his end of the bargain.

Sandra Alami and Deanne Elliot, third-year psychology and history majors, posed for pictures and were honored to meet him, stating, “It’s nice to meet the person who makes your education possible.” The dining staff felt the same, especially working with the chancellor in their own territory of a kitchen.

When asked how he felt about the huge success, Wilcox responded with a crinkle-eyed smile, “Oh, it’s great!” The exceeded expectation of over $10,000 was overwhelming for him, but he was encouraged to push even further, gaining even more contributors among students, alumni, celebrities and even concerned citizens. “Serving (the students) was so exciting,” he said. “You know, I worked in the cafeteria at my college,” the Michigan State graduate added. “So when you work in the cafeteria, you can become the chancellor!”

The sun made a guest appearance just as students went back to their regularly scheduled Friday morning and just in time for the panoramic picture of the staff. Marking the memory of the first-ever “Chancellor’s Breakfast” for UC Riverside, Wilcox wrapped up with a thank you and a promise to make this happen again, summed up in one word— “definitely.”