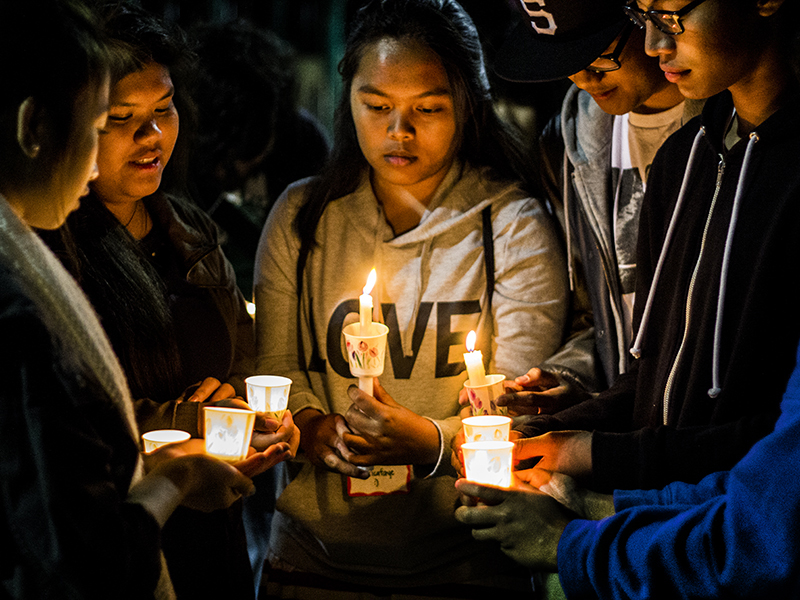 On Nov. 7, the Philippines were struck by Typhoon Haiyan, the fourth-strongest tropical cyclone ever recorded, and the strongest storm to ever hit land. The storm has claimed over 5,000 lives and left four million people without a home. With such devastation, the impact of the storm is a global one, felt even here at UCR, with many friends and family of our students and community directly affected. As a result, many UCR students and faculty members are engaging in efforts to show their support and even lend a helping hand in the wake of disaster.

Lighting a candle for hope:

A cold frost blanketed Riverside’s Andulka Park on Friday, Nov. 15, where dozens of people from across the Inland Empire and Los Angeles County huddled together to honor victims of Typhoon Haiyan in the Philippines.

The event was organized by the National Alliance for Filipino Concerns (NAFCON) of Southern California and sponsored by eight community, faith and campus organizations, including UC Riverside’s very own Filipino student group, Katipunan. Speakers from each affiliated organization urged for continuing assistance, aid and support for the 13 million who were affected by the typhoon

UCR Katipunan President Yoshi Loyola experienced a sense of inspiration and empowerment from seeing the different communities gathered together. “It’s important that we create a safe space on campus where students have sympathy and sensitivity for others who have been affected by the typhoon disaster,” she said.

Every participant at the vigil was handed petite or long candles, which were lighted near the end of the event. The lit candles left pigments of reds and yellows against the faces of the spectators, who laid down their heads and closed their eyes amid a solemn prayer, before scattering into the night.

Members of the Asian Pacific Student Programs, such as fourth-year biological science major Arleen Konian, also partook in the vigil. “We’re here … to pay respects to the victims of Typhoon Haiyan,” she said. “It’s important to give back to people who’ve suffered a natural disaster.”

Secretary of Katipunan, Andrew Rubi, spent the vigil in deep reflection about the challenges experienced by the afflicted victims, some of whom included his own family members. “My grandma’s sister and her family were caught in the typhoon and went missing. It was a really hard time on all of us, not knowing where your loved ones are, not even knowing if they were alive.”

He has since received word that his family in the Philippines were able to escape that typhoon and are currently taking shelter at an evacuation camp.

“We are so fortunate to know that our family is safe. They told us that their house was completely destroyed and that they weren’t able to save much, but they were also very grateful to be living when so many didn’t make it,” said Rubi. “Katipunan and many other organizations and charities around the world are working tirelessly to help those in need. They still need our help. It’s our job to respond and to take action.”

A thousand dollars in one night:

Life Sciences 1500 was buzzing with members of Katipunan and Filipinos in Health Sciences (FIHS) as well as other supportive students on the night of Nov. 20. All of them were dressed their very best and smiling their very brightest, because it was the “Katipunan FIHSes For a Cause” event, where the two groups hosted a variety of performances and auctioned off an array of different services in order to give the proceeds to NAFCON to help in the relief effort.

The warmth and support was apparent from the moment you walked in, with a donation box full of water and clothing at the door and a table covered in a large banner that read, “Stay Strong.” Scattered among the letters were handwritten messages from many of those who attended, all of them sending their love from California and assuring the people of the Philippines that they remain in students’ hearts, thoughts and prayers.

The event started with everyone rising from their seats as the Kati Choir took the stage and sang the national anthem of the Philippines. Once everyone was sitting again, a short video was shown detailing the effects of Typhoon Haiyan; the somber and serious emotions were truly palpable upon seeing pictures and statistics of the catastrophe. When the film was over, the event coordinators brought Chancellor Kim Wilcox to the stage to give a short speech. “It’s truly a sad occasion,” said Wilcox, “but it’s a proud occasion for me to be here and see just how much you all care.” Wilcox went on to discuss the importance of people helping each other on a global scale. “You are reminding us that we’re one big group of people … This really is the best face of the university.”

The service auction began as soon as Wilcox stepped down. Cabinet members of Katipunan and FIHS walked up and proposed the details of their services, and voices in the audience rapidly began to shout out increasingly high offers. The services ranged from a dinner for three at the Boiling Crab sold for $31 and an all-expenses-paid trip for three to Disneyland sold for $200, with some of the other services including homemade dinners, spa days and excursions throughout LA and the Inland Empire. A few times a service would be sold at an offer greater than $50, which the buyer would pay for, only to then tell the event coordinators to put the offer back up for auction, hoping that as much money as possible would be poured into this great cause

Arguably the most vibrant was by UCR’s Vietnamese Student Association, which performed the Lion Dance. Students at the front of the stage filled the air with the steady beating of drums and gongs while two students controlled the giant red-and-white lion, which stomped through the room to the beat, shaking and slinking through the aisles.

At the end of the night, the total amount of money raised for charity came out to a whopping $1,044. “That means so much to us,” said Internal Vice President of Katipunan, Nick Carrillo. “It feels so good to do our little bit to help.” Carrillo felt proud at how much money would be going to NAFCON, who will send the money where money is most needed in the Philippines. He was also proud to see the turnout to the event, and how UCR is uniting to help. “It just shows how much this campus cares and how much it wants to make the world a better place. It’s really heartwarming to know I go to a campus that is willing to care.” Carrillo promises that more fundraisers are to come, and relief efforts will be ongoing. “We can all come together and help this cause.”

In the wake of Typhoon Haiyan, UCR professor and Poet Laureate of California Juan Felipe Herrera created the disaster relief poetry project, “Hawak Kamay: Poems for the Philippines after Haiyan.” The words “Hawak Kamay” are Tagalog for “to hold hands” — a perfect fit for an effort to reach out and comfort those in need.

The operation works as a group on Facebook that is open to the public. As of press time, the group has 1,555 members, many of whom are consistently posting original poems of comfort, healing, and inspiration. People of all backgrounds are showing their support, posting a wide spectrum of poems — from those that are short and sweet to those that are long and loving. The poems themselves also vary in language, some English, some Tagalog, some Spanish, but all of them carrying universal messages of warmth and support

“In a time of crisis, poetry from people’s hearts find a way to calm the storm,” said Herrera in a statement for UCR Today. They are currently still working on how to get these poems in the hands of those affected by Haiyan, but when they do, it is sure to bring a welcomed comfort to those in need.

Herrera was also gracious enough to answer a few questions for the Highlander:

What were your goals upon creating this project?

I want, most of all, a sense of ongoing awareness regarding the suffering of the peoples of the Philippines, the need for resources and to reconnect with our dear friends and families, our “ohana” across the seas. All this can be called upon with poem. “Hawak Kamay” means to hold hands. We can do this – it is far stronger than a typhoon, believe it or not. This is part of my Unity Project – as a Poet Laureate of California.  As a human being, most of all.

How do you think these poems are going to influence the lives of those affected by the typhoon?

The loved ones of the Philippines are also taking part, here and abroad. Yet, this is about an all-community gathering. The more we do this, the better. More relationship, more communication, more heart-words, more creativity – the building blocks of great things. And most of all, the best way to rebuild, search for new horizons, heal and continue.

What is your reaction to having over 1,500 members on the facebook group?

Well, I am very pleased. Hawak Kamay is an effort, on Facebook, by poets Vince Gotera, Su Layang, Arlene Biala and Christina Lux (who manage the page and work tireless hours in tweeting, promoting and also writing their own poems for Hawak Kamay – a community effort) Many more are working for this cause and are inviting groups, writers, papers and communities. There are photos, art, songs, bilingual poems, letters, phrases — the breath of life, that is what we want when we hurt, when we feel alone. When someone waves their hand close to our hand, that is when we rise.