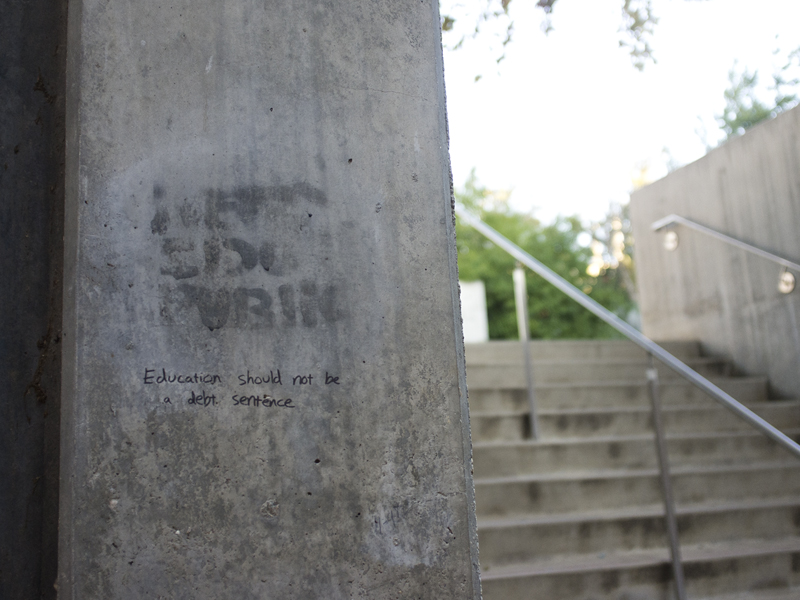 Passive-aggressive tweets, Facebook statuses and Tumblr posts seem to be the way students deal with issues these days — even ones that deal with the imperative issues like that of divestment from higher education. Students are beginning to define the role of passive activism by doing things such as tagging the stairs by the University Lecture Hall (UNLH) with chalk on important issues, or simply liking a “Take Back UC” Facebook page, but ultimately are not doing anything about the issue itself.

The chalk on the stairs won’t be seen by Gov. Jerry Brown or move our university forward. The written chalk words ultimately go in vain when students walk past the message on their way to class, leaving it to be washed away by the rain with all other imperative issues that need to be tackled.

Maybe it’s our generation who passes the blame on other people — this is by no means an excuse for our flimsy politicians — but it’s interesting to note that we are students who have power and are not utilizing it to its potential. As students, we need to recognize that we do have power to make change but that doesn’t mean we should make one improvement and wait around for the next change.

During the voting year of 2012, Proposition 30 was publicized everywhere through the Rock the Vote campaign by student organizations such as ASUCR and CALPIRG. These kinds of campaigns explained to students why we would benefit from this proposition by lowering tuition. ASUCR and CALPIRG worked as a joint effort to inform students about the propositions and encouraging students to register to vote.

ASUCR and CALPIRG even engaged campus clubs in a competition entitled Bounty Project that had students compete to register the most students to vote and inform students on Proposition 30 as well. By involving student clubs on campus, it gave students an incentive to educate themselves on the issues and to encourage other students to vote, creating a successful turnout of voters and a well-informed campus.

Even Occupy UC Riverside, which resided on the Highlander Union Building (HUB) lawn, organized a protest when the regents arrived and demonstrated the power that we have as students. Protesting with more than 1,000 students — even after the students at UC Davis were pepper-sprayed — revealed the passion that students had toward their right to be educated.

Unfortunately, this passion is lacking and students are at least partly to blame for the state’s divestment from higher education. The actual effort we as a student body have put into the issue at hand is disappointing and has led to issues that are important to students being placed on the back burner once again.

For some motivation for another protest on campus — that doesn’t involve shutting down our sources for survival — or even constant communication to Gov. Jerry Brown on what we need as students, the reasons as to why we need to take action rather than passive aggression lie within our hands. At the end of the day, we as students need to utilize ourselves, and instead of looking at a poster, liking a page or sitting in a circle of enjoyable smack-talk, we need to confront the perpetrators ourselves with more numbers.

Let’s move back to two weeks ago when UC President Janet Napolitano came to campus and there was a small protest of about 40 students marching by the Bell Tower, Although the intent of the protest was to voice students’ concerns, the protest was not as effective as it could have been. The protest did reveal that there is some spark in students when there is something disagreeable in our UC system, but the message is ignored when only a few are representing the masses. And to be frank, it is highly probable that Napolitano didn’t even bat an eye at the protest.

Students also need to inform themselves of the issues that are taking place in the UC system instead of students just finding out about what is concerning to our education when a protest actually occurs. There needs to be more activism by engaging students constantly on current issues. This can take place during high traffic times at the Bell Tower where students can continue to inform one another on the issues that are happening and may affect students and their education. But students themselves also need to take the initiative by reading up on what our government is attempting to do with education so that we can prevent the depletion of money from our universities and the increase of our tuition.

This is college, the place where we now have the freedom to take action instead of waiting on our guardians to do it for us. It’s now time to step out of our comfort zone and enter the arena of action instead of just sitting in the stands and silently cheering on the few brave who volunteered to fight for the the rest of us.

You might think that this article is a form of slacktivism itself, causing it to be a contradiction. And you might be right. But only if you do not take action. Instead of this just resembling yet another form of slacktivism, take the initiative to be a part of the campus community and learn about the issues at hand so together we can work in collaboration for an education that reflects what we need.

So there is an issue on divestment from higher education, but there shouldn’t be. If we all take a stand together, if we encouraged everyone to communicate our issues to Gov. Brown, if we informed everyone throughout the university, in each class or of a protest happening during week, we just might move past this slacktivism and become well-informed individuals who know how to protect our education.

In order to maintain our rights to an affordable education, we need to take care of ourselves by learning about what is happening to our university and forming a stance when it diverts from the actual mission of the University of California. We need to take the “if” out and expect ourselves to take charge when our rights to affordable education are threatened.