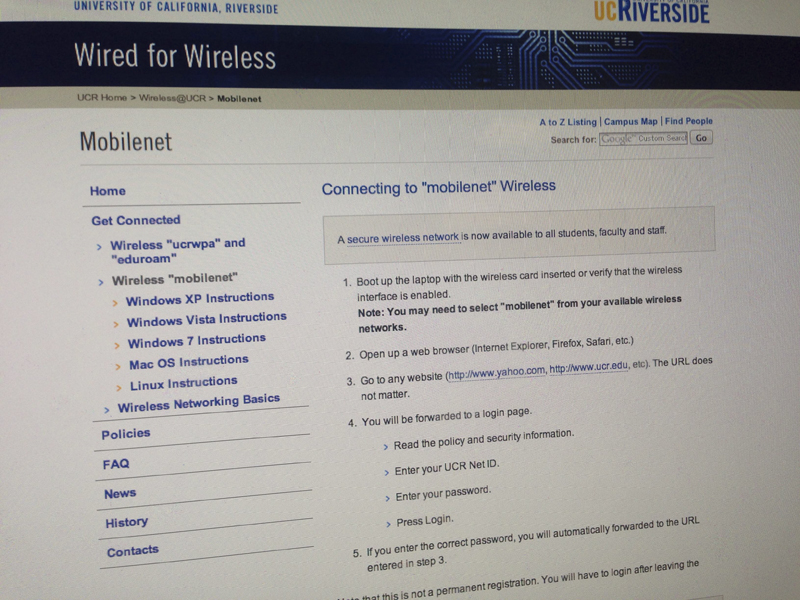 During fall quarter, members of the UCR community reported that the campus wireless network Mobilenet was working intermittently. Following the complaints, a campus-wide email was released on Nov. 26, stating that the issue was rooted in the Mobilenet authentication service and that the campus had been working with the vendor, Cisco, to resolve the issue.

According to UCR Senior Director for Technology Operations Larry McGrath, as of the second week of December, the issue has been fixed. In a phone interview with the Highlander, McGrath explained that there was a bug in the Cisco-provided software that did not allow the network to function properly.

According to him, the issue took approximately three days to resolve with crew members reportedly working 18-hour shifts, in some cases, to resolve network problems. UCR also worked with Cisco staffers to rewrite and reinstall new code that would resolve the connectivity problems.

McGrath also added that the department is now working on new projects to increase the reliability of internet connectivity for students through the addition of “smarter” access points around the campus.

Two UC Riverside students are currently studying at the recently opened School of Medicine for free. Jennifer Han and Jonathan Pham have been offered a deal to have their $35,000-a-year tuition paid off, but only if they agree to stay in the Inland area and go in the field of primary care instead of specialty fields.

“I think it is an amazing deal,” Han said in a statement.

The deal was made as a response to the shortage of physicians in California.

“Forty percent of the doctors in my community look like me,” said School of Medicine Dean G. Richard Olds. “They’re 55 years of age or older and they will retire in the next 10 years. So, the net result of that is we will probably have a 5,000- to 6,000-physician deficit in 10 years no matter what anyone does.”

Riverside County has some of the lowest numbers of primary care physicians in the country. Part of the mission statement of the UCR School of Medicine is to expand the area’s physician workforce and “to improve the health of medically underserved populations.”

A study by the Chronicle of Higher Education recently revealed some of the top-paid university leaders around the nation. According the the study, former UC President Mark Yudof was ranked eighth in the country in 2012 in terms of public school leaders.

Yudof was also ranked the sixth-highest-paid leader in the state of California and the highest-paid among public universities. Base pay, bonuses, housing and transportation compensations are all counted up in the study.

Yudof served as the University of California president from 2008 to 2013 and made $847,000 in compensations per year. Former U.S. Secretary of Homeland Security Janet Napolitano took his place last summer and took a voluntary pay cut to make $570,000 a year.

In an interview with NBC’s “Meet the Press,” Napolitano stated that Snowden had “leaked very extensive information” that does not strike a balance of safeguarding the national security while upholding the value of privacy.

“I think (Snowden has) committed crimes and I think that the damage we’ll see now and we’ll see it for years to come … From where I sit today, I would not put clemency on the table at all,” said Napolitano.

Napolitano’s hard stance against Snowden, however, is not shared by everyone in the UC community.

“I believe reports on Snowden’s damage to our national security has been exaggerated by NSA,” expressed UCR political science professor David Pion-Berlin.

“It is true that Snowden is a criminal in some sense — he broke laws. But it is not right to treat him as a traitor. He should be granted leniency for whistle-blowing our government’s dishonest mass surveillance,” added Pion-Berlin.