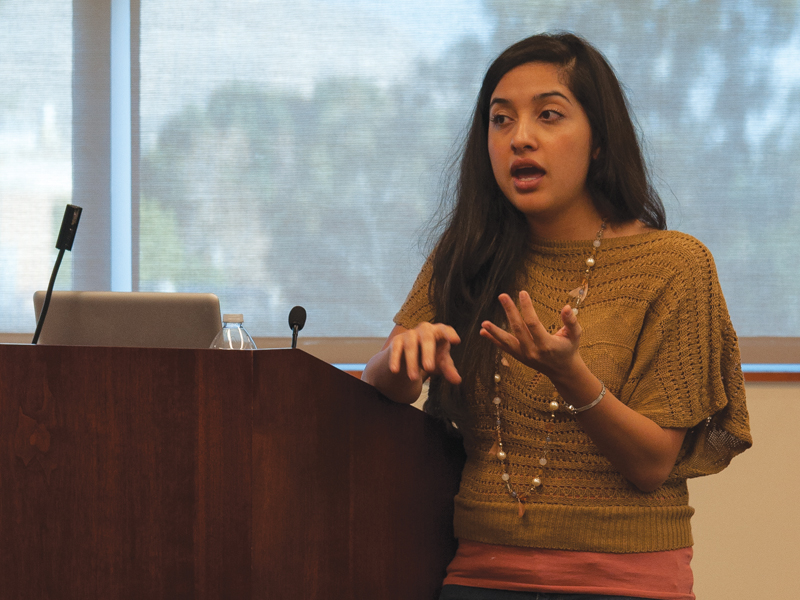 Flores opened up the meeting by explaining the role of a student regent: “(We) represent 230,000 students — both undergraduate and graduate — on the governing board of the University of California. As members of the UC Board of Regents, we are specifically tasked with representing students’ interests.”

The student regents continued to share their projects and resolutions on expanding accessibility, affordability and diversity — three insignias of the UC — across the system.

“My primary project is access to higher education for underrepresented students as it relates to low-income communities of color,” explained Flores. “Sadia is interested in the financial aid aspect of affordability and restructuring what that system looks like and how it benefits low-income and middle-income students and undocumented students.”

The discussion went on further to explain the application and selection process, which would require all applicants to submit the application form with personal statement by Feb. 20. Selected finalists will then go through three rounds of interviews in May for final appointment.

For writing a successful personal statement, Saifuddin emphasized the importance of focusing on a unique personal experience while tying its relevancy to the roles and responsibilities of a student regent. Saifuddin explained that for her personal statement, she shared her experience of working four jobs during her sophomore year to financially support herself, and how the experience contributed to her desire of making the UC more affordable.

“My biggest advice is: be yourself,” commented Flores on writing the personal statement. “Write about your passion and what keeps you up at night because it’s going to be very apparent when we read your application that this person is doing this for the right reasons. And trust me, it’s not worth doing this for the title or the perks of the job because there aren’t too many of those.”

Excellent oral communication skills, perseverance through long work hours, charisma and other relevant qualifications were also greatly emphasized as qualities that would set apart individuals from the large pool of candidates applying for the position.

The Q-and-A portion of the meeting opened up the floor for students to ask any questions that students had for the student regents. ASUCR senator Shadi Matar asked for a comment on UC President Janet Napolitano’s opposition to the American Studies Association resolution to endorse a boycott on Israeli academics, on which Flores responded, “I think her response was indicative of a lack of engagement from the faculty representatives on the board. I think if there would be a much stronger opinion and even engagement between the faculties she may not have responded in that way … It’s definitely something that we could discuss with the faculty representatives on the board of regents.”

The student regents were asked to share their current projects, advocating accessibility, affordability and diversity in the UC system. Flores spoke about her accomplishment and partnership with the UC Student Association’s IGNITE campaign (Invest in Graduation Not Incarceration, Transform Education) in a resolution that led up to $10 million of allocations toward academic preparation programs for underrepresented youth. Saifuddin also shared about her contributions to raise more than $90,000 with Berkley Food Pantry for students who need food or hygiene items.

UC Riverside was the second-to-last stop on the student regents’ tour of the UC campuses.